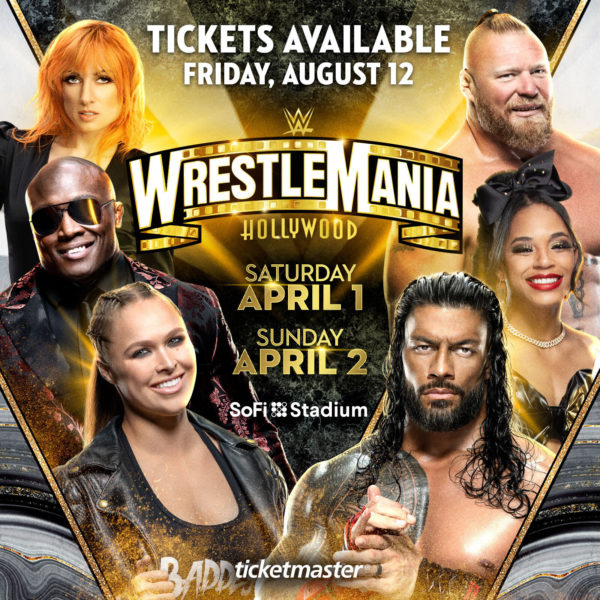 months to go WrestleMania 39 and tickets have already gone on sale. Although there are no confirmed fights, a fight between Roman Reigns Y rock, which would be the highlight of the evening, although it is a subject that remains to be seen. Either way, WWE expects a full house at the SoFi Stadium facilities during the event.

► WrestleMania 39 weekend events will be similar to this year’s

This Thursday, WWE issued a Press release announcing the series of events that will take place during the weekend of WrestleMania, with Friday Night SmackDown, the WWE Hall of Fame ceremony, NXT Stand & Deliver and Monday Night Raw from the Crypto.com Arena in Los Angeles, California, as part of the WrestleMania 39 weekend, beginning on March 31, 2023. Additionally, WrestleMania 39 will emanate from SoFi Stadium on April 1 and 2 of next year.

That said, NXT Stand & Deliver will take place on Saturday, April 1, hours before the first night of WrestleMania 39, similar to what happened this year, while The WWE Hall of Fame ceremony will take place after the SmackDown broadcast, one day before the great event.

WRESTLEMANIA GOES TO HOLLYWOOD WITH A FULL WEEK OF EVENTS IN LOS ANGELES (Graphic: Business Wire)

WrestleMania 39 comes to Hollywood and takes place over the course of two nights on Saturday, April 1 and Sunday, April 2 live from SoFi Stadium. Tickets are currently on sale through Ticketmaster. Fans from all 50 states and 58 countries have already made their plans to attend.

During the last decade, WrestleMania has generated more than 1.25 billion dollars in economic impact cumulative for the cities that have hosted the event. Additional WrestleMania Week events will be announced soon.