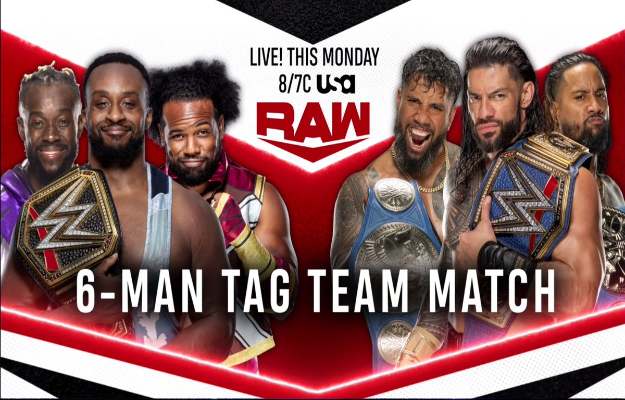 During the night of yesterday several combats were announced that we will be able to see next Monday on the WWE Monday Night RAW program, highlighting the presence of Bloodline in the show of the red mark.

Bouts announced for the September 20 show of WWE RAW

Last night during the WWE SmackDown show broadcast on FOX A three-on-three match was announced for the Monday, September 20 show of WWE RAW.

The match will pit the members of The Bloodline, Roman Reigns and The Usos against New Day, Big E, Xavier Woods and Kofi Kingston., in a fight that occurs because the SmackDown roster will be touring the United Kingdom and Roman Reigns due to his health problems has been ruled out of the trip and will be on RAW.

In addition to this fight in the show next Monday we will also have a defense of the brand’s tag team titles with Natalya and Tamina defending the same against Nikki ASH & Rhea Ripley. In recent weeks we have seen this rivalry growing.

Another fight that we will see with implications for Extreme Rules is the one that will face Jeff Hardy vs. Sheamus, since if Hardy wins the fight, he will be incorporated into the fight for the United States title in the PPV, turning this into a triple threat.

Finally we have announced the fight between the two former female couples champions since Nia Jax will face Shayna Baszler.

In addition to the fights, two segments have been announced for the show, the first is the celebration of the WWE title by Big E by New Day and the presence of Charlotte Flair in the playground of Alexa Bliss.