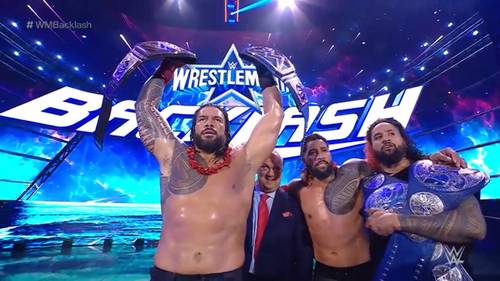 Tonightin the sixth fight of the premium event WrestleMania Backlash 2022 presented by WWEthe star of the evening, there was a not very frequent fight of trios, of Australian relays, between Roman Reigns and the SmackDown Tag Team Champions, Jimmy Uso and Jey Usoagainst Drew McIntyre and the Raw Tag Team Champions, Randy Orton and Matt Riddle.

The bell rang and Orton began the match with Jimmy Uso. Orton threatened to use McIntyre’s Angela sword. Jimmy hits him hard in the corner with quick punches, but Orton with a sting to the eyes in front of the referee breaks free. Riddle goes in with a Moonsault and then stomps Jimmy for a count in two seconds.

► The Bloodline, without known rivals who can overcome them

Jimmy reacts and threw Riddle against the corner, he reacted with a kick to the chest after receiving two Machetazos to the chest and charges Jimmy, who makes a great Supplex. Riddle took over from McIntyre by charging Uso with one arm, a great show of strength. McIntyre walks in and attacks Jimmy, but always staring at Roman Reigns, his only real target.

Paul Heyman tells Roman Reigns not to enter the ring because he has nothing to prove because he is The Tribal Chief. Reigns ignores him and enters the ring. But it was a trap and Jey Uso entered, receiving a strong kick and an Explorer Supplex that was somewhat poorly executed by McIntyre. Riddle came in and stomped on Jey’s hand and then suplexed him.

Jimmy with a kick to the back that the referee did not see and the punishment continues at this point with all violence by the Use. Jimmy punishes Riddle’s neck with the ropes and Jey kicks him. Riddle takes punishment to his groin and is totally lost at this point in the match.

That’s how everything stayed for several minutes, the Usos dominated Riddle but they didn’t make him lose the fight and after several minutes, Reigns entered to continue beating Riddle. Reigns gave Ridle a Forearm to the head to continue showing absolute control of The Bloodline. After a fairly hard Spanking against the canvas, Reigns almost got the count of three.

Jimmy entered to continue punishing Riddle and just for fun he pulled Orton’s eyebrow with a Superkick. El Uso began to play with the support of the fans shouting his last name, but Riddle surprised him with a hard knee to the face. Drew McIntyre and Roman Reigns They took over at the same time and had to see each other face to face and began to hit each other with great power.

McIntyre took advantage with two Neck Ties from Reigns and a Painful Supplex, as well as a Stripper. Jimmy Uso also received the Stripper and no one could stop the Scotsman at this point. Jey climbed to the edge of the ring, McIntyre hit him and Reigns managed to start dominating the match by punishing McIntyre.

Reigns even had time to raise the straps that identify him as the WWE Undisputed Universal Heavyweight Champion. He then hit Riddle, knocking him out of the ring, but McIntyre surprised him out of nowhere with a Claymore Kick.

Randy Orton entered and faced Jimmy Uso, whom he threw with a Spinning Counter after two Neck Ties. Jey received the same Rotary Counter and then Jimmy was finished off with a DDT with the help of the ropes. Jey was thrown out of the ring.

Then, out of nowhere, Orton avoided the Superman Punch with a tremendous RKO on Reigns. But Jimmy applied a Superkick, however, Orton gave him an RKO and narrowly won the match. Jey Uso saved the fight at the last second.

McIntyre entered the ring and attacked Jey, then went for a Claymore Kick, but Jey superkicked him and then along with Jimmy and a Double Superkick they knocked McIntyre out of the ring. Riddle recovered at this point and he wanted to go in, but Orton was quite far from his corner.

Riddle walked in and Jey too. Riddle managed to overpower the Usos and knock Jey down with a Suplex to the mat. Then with a Sentón Bombazo and a Kick in the Face. Tremendous Whip against Riddle’s canvas and then he almost wins the fight with a Senton Bomb.

“This is amazing!”fans chanted. Jey avoided an RKO from Riddle and almost took the fight, then with a Stripper he was close to the end. Orton avoided the fall for his team. Jimmy Uso was hit hard outside the ring by Orton, but received a Super Superman Punch out of nowhere. McIntyre then threw Reigns against the metal stairs.

With a Urinagi, Reigns broke the English broadcast table with McIntyre’s body. Riddle fell on Reigns and Jimmy. Jey with Super Butt fell on top of Riddle and put him in the ring, where they were both lying on the canvas and tired. Riddle surprised Jey with a somewhat poorly executed Super RKO. But Reigns stunned Riddle with a Spear for the win by three.

To see the coverage, to know the fights, the results and the qualifications of the fights of the premium event WrestleMania Backlash 2022 tonight, click here To access the best coveragethat of us, that of SUPER FIGHTS.