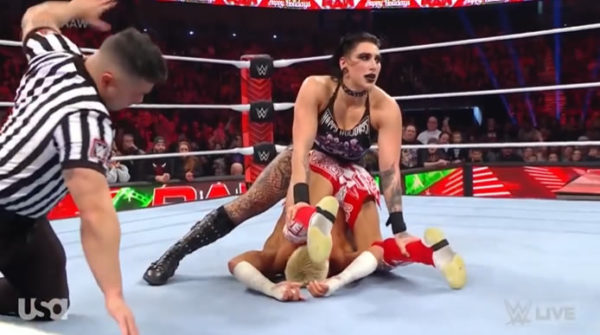 Akira Tozawa is having more exposure on television for the first time since it came to Raw, and although he had a certain role when he played the 24/7 Championship with r-truthhis participation this time has not been limited to comedy segments, but also that he has shown his qualities in the ring.

In the recent Monday Night Raw, rhea ripley got mad at Tozawa after he interfered on behalf of The Street Profits to give them victory over Judgment Day, and immediately challenged him to a match, giving him the first intergender fight in a long time. There, the former Raw Champion was much superior, except for a brief offensive by the Japanese, and eventually he managed to capitalize on a distraction caused by his teammates to finish off his rival with a Riptide.

Once the match was over, both Akira Tozawa and The Street Profits were interviewed behind the scenes, but the Japanese didn’t manage to say much, as he was still beaten after his match with The Judgment Day member. However, then he turned to his social media to lament his defeat and wish a merry christmas. Rhea Ripley also took advantage of the medium to respond to her former rival.

Despite the defeat, Akira Tozawa finished this 2022 relatively well by having a greater participation in television and will hope that the new year starts in the same way, while Rhea Ripley will seek to consolidate even more within The Judgment Day, and even Let’s not rule out that she will eventually go for the Raw Women’s Championship in the future.

Rhea Ripley and Akira Tozawa reacted after their match