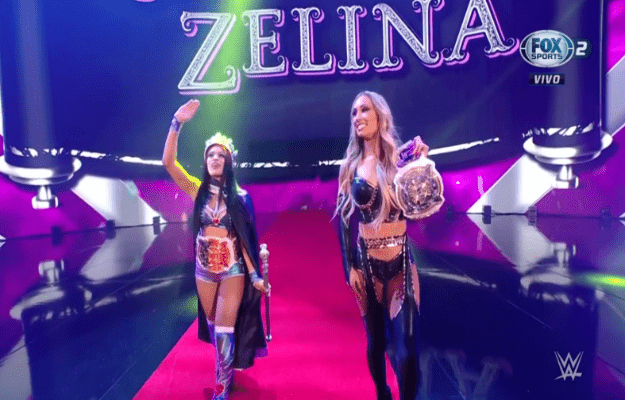 The Nikki ASH team and Rhea ripley they have had some problems but tonight they have the opportunity to return to the top, Carmella and Queen Zelina defend their titles as a couple against the former champions in WWE RAW.

One of the most controversial teams of 2021 was the one made up of Rhea Ripley and Nikki ASH, The Nightmare and the almost super heroine proved to have a good union with which they even had a reign with the women’s tag team championships, however recently they lost the titles to the team of Queen Zelina and the most beautiful woman in WWE Carmella, but tonight both teams face off in a rematch.

In Monday Night RAW Nikki and Rhea have the opportunity to reconnect and be the champions again, however Carmella and Queen Zelina would not allow them easily, at the beginning of the fight. Zelina and Rhea measure each other in the ring and the last one begins with the mastery of it.

when Nikki has her turn she starts performing well, however in an oversight Queen Zelina does a roll-up and with this, 1 2 3 Carmella and Queen Zelina retain the women’s tag team championships, andThe result ends up being the same and Nikki ASH is left with a shocked face while Rhea looks at her in disappointment, Maybe little by little Rhea Ripley’s patience will run out and we will see them parting ways but at the moment it has not been confirmed.