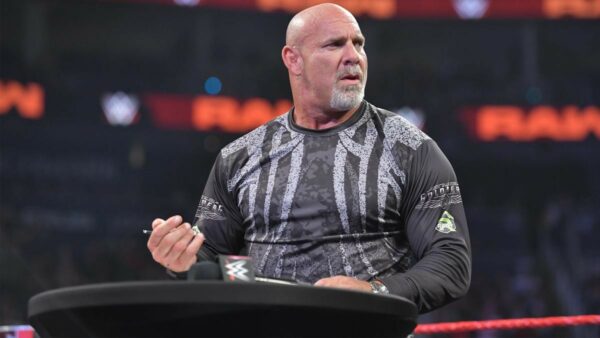 Goldberg last wrestled with WWE in Elimination Chamber 2022, where he faced Roman Reigns for the WWE Universal Championship, losing the match relatively quickly, after being subdued by a Tribal Chief guillotine. Even so, the Hall of Fame member was left “with the blood in his eye” regarding the fact that he could not defeat the Tribal Chief.

► Goldberg commented on an anecdote about Stephanie McMahon

Goldberg has had a dominant career in the 1990s, and in recent years he was only a shadow of the one who amassed a streak of 173 consecutive wins without losses; However, he is still considered an influential name in the business, and that is why WWE had chosen to sign a contract with him, so that he works sporadically. At the time, “The Myth” commented that he had no more fights left in his contract with WWE, although he also did not say that he had become a free agent.

During a recent interview with RomanAtwoodPodcastGoldberg made it clear that he believes that WWE never wanted him to be World Champion “for more than 10 minutes”, adding that He only has two months left on his current WWE contract.

“Stephanie, if you’re listening to this, my contract ends in two monthsso don’t take this, don’t blame us.”

Next, Goldberg told an amusing anecdote about his encounter with Stephanie McMahon, and his iconic head butt.

“Stephanie came up to me backstage one night and said, ‘I heard you’ve been headbanging doors.’ I said, ‘Yeah, that’s how I have to be.’ She says: ‘I want’. I don’t want you to headbutt more doors’”.

“I wanted to make sure I was following their orders: there was a knock on my door. Pam! I hit the door and broke my hand. I never told them about it. So what am I going to do? ‘Time out!’ It’s fucking live TV. So I knock on the door. They’re on the other side of the door, they don’t know what’s going on… I’m wearing these gloves, right? So luckily I grabbed my glove and stuck my hand out so I could move it. And I say, ‘Okay, let’s go to the ring.’ So I went to the ring, grabbed the rope and fell. Y It was the night Steve Austin and I first met, I think, and we had the beer party.”.

It remains to be seen whether or not Goldberg renews his contract with WWE and, since it seems that he has no plans to retire yet, the issue is now on the WWE side.

How much time does Goldberg have left on his contract with WWE?