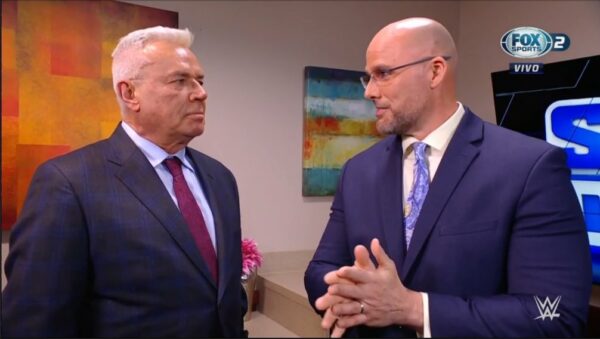 Eric Bischoff He was named Executive Director of SmackDown in 2019, his last position in the company, but his only lasted a few months, since he left the position in October. In 2021 he was inducted into the WWE Hall of Fame and appeared in some backstage segments and on RAW and SmackDown over the past year, having as the last appearance in during a backstage segment with adam pearce Y Sonya DeVille on the January 21, 2022 episode of SmackDown.

Eric Bischoff was the mastermind in WCW when he defeated WWE in a ratings battle in the 90s, although he would eventually join the company after the former’s demise, although he has also appeared in TNA and AEW.

A fan asked Bischoff on his show 83 weeks if he would consider returning to WWE under Triple H’s new regime, and the Hall of Famer was emphatic in saying no, arguing that he now enjoys life and doesn’t like to travel much these days.

Yes, that ship has sailed. I am very happy where I am. Not only happy where I am, I live in a beautiful place, I have a beautiful house, I am in a part of the country that people from all over the world travel to to enjoy every year and I am very grateful for that, but more than that, I am grateful for my tranquility and I am in a stage of my life where I hate to travel. It’s not that I don’t want to get involved in the wrestling business.”

“I’m grateful for all of that, but for me to get on a plane at this stage in my life and travel every week, or be in the rut that I know you have to be in to really be involved in this business in any meaningful way. , It’s not going to happen.»

Evidently, the Hall of Fame member is no longer expected to be regularly on WWE weekly programming or any professional wrestling company, although He did not rule out that —as has been the case in recent years— we continue to see him in sporadic appearancessince it has not completely disassociated itself from the business.

Eric Bischoff explains why he would not return to WWE