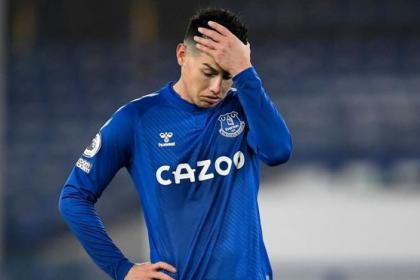 Everton is finally about to sign the coach who will replace Carlo Ancelotti. And no James, you won’t like it.

The 61-year-old DT is signing as he has already agreed on the fundamental points, according to the English press.

Benítez is without a team, just like Nuno, but while he comes from football in China, specifically from Dalian Professional, the Portuguese has just managed Wolverhampton and has fresher and clearer news about the Premier. That is why I would be asking for more guarantees than the Spanish.

It is the reason why there is talk of hours for Benítez to stamp his signature, which is not especially encouraging news for James Rodríguez, who already had him as a coach at Real Madrid and did not flow with him at all. In fact, until Zidane, it was the Colombian’s most difficult stage at the Santiago Bernabéu.

That and a phrase dating back to 2007 would have Everton scrutinizing the next pass very carefully. It is worth remembering that James is the most media player of the current squad and, if you want to get more commercial benefit, the last thing that is advised is a DT who denies him prominence.

Of course, it is not the only thing that plays against Benítez because the Liverpool Echo newspaper has reminded him of a phrase from 2007 that still resonates: he described the ‘toffee’ as a “small club”.

DT himself apologized and wanted to amend that qualifier in an interview with Carragher on Monday Night Football, in 2019: “I made a mistake when I said it was a small club. What I wanted to say is that they are a small team because in that game I remember that they had a chance. The Liverpool fans were happy and the Evertonians were upset. But it didn’t mean they were a small club, it meant they were a small team. ” And what is the difference? It is what the fans, according to the aforementioned media, does not end up closing them.

The truth is that Benítez does have a connection with Liverpool, but with Anfield not with Goodison Park. The Spaniard coached at Anfield 11 years ago and then had a tour of Inter Milan, Chelsea, Napoli, Real Madrid, Newcastle and Chinese football. Now he is the strongest candidate to direct the ‘blues’. So as the song says, ‘Be strong’ James, they are watching over you …