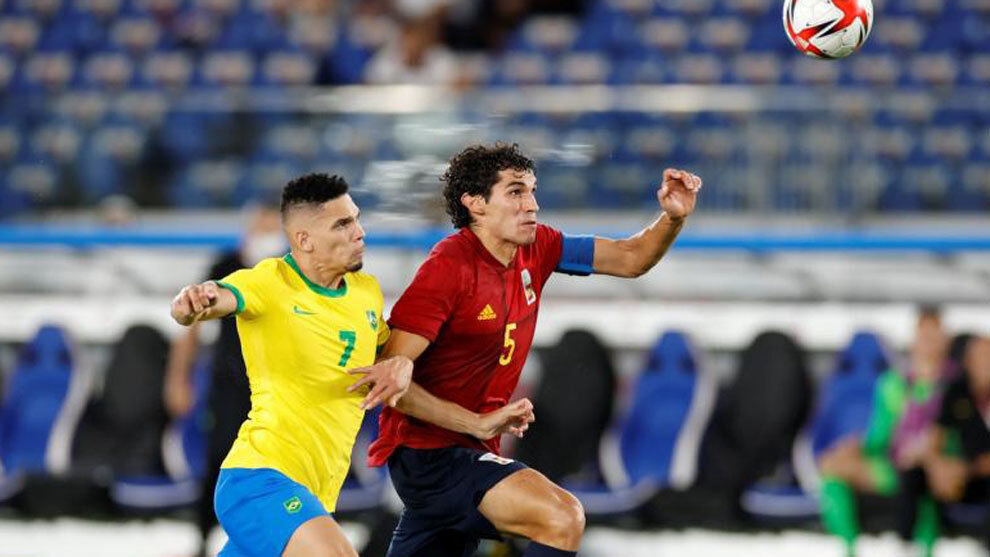 JEsús Vallejo, captain of the Olympic team, valued the silver achieved by Luis De la Fuente’s team, after losing the final to Brazil in extra time (2-1) and being the protagonist in the action of Malcom’s final goal.

“Against the Ivory Coast and Japan we were able to win but not this time, they are details, but we must assess what we have achieved, a cycle is closing that we wanted to do with a gold, but we have put a lot of energy, it will be difficult to get out of this team, of this family that comes from far away. We still have to be together this Sunday and when we return home we will realize how proud we have to feel after the efforts of many people behind us.

“A mixture of sensations, we came for the gold but it could not be and with the passage of time and days, when we return to Spain we will value that silver as it deserves. It is very difficult to get here and we have to stay with that and with the great group that we have formed from the first day until today. We closed the circle of the lower categories of the national team, it would have been better with gold, but that’s how football is. Against the Ivory Coast and Japan we were able to win that extra time, today it was the other way around and you have to value silver, which is much more than bronze. “

“It is a play in which I think we take a corner and they catch us against it, the action has won me Malcom and we have not had many more options. It was a very disputed game in which anything could have happened. The fairest thing would have been better for it to be resolved on penalties and football has not given us back what we have given. “

They catch us against it, the action Malcom has won me and we have not had many more options

“I was very sorry for the group because we have done a phenomenal job. We have had two injured players like Óscar and Dani who have tried to recover their physios and the doctor until the end, we have spent 40 days of concentration in which we have created incredible bonds and I have told you that now it will be difficult to get to our clubs and realize what we have created here, I wish we were here for more time to value them and the time we are we must enjoy it to enjoy this Olympic experience and get home with the feeling of having given everything for this country and getting this medal that costs a world. “

“It is not a new position because I have also played in Granada, prepared to help the team in whatever it touches me, it is what has to be done in the course and to be at the disposal of the coach for whatever it touches. I like what I like. it’s playing football, today we weren’t good at it, but against Japan and the Ivory Coast we did.

Right side? What I like is to play football “

“On Tuesday we are in Valdebebas and change the chip from selection mode to Real Madrid mode.”

“It has been complicated because we could hardly get together with athletes, I have met Gómez Noya who made me very excited and is something difficult to assimilate, many emotions in a short time. As time goes by, we will value everything better than now, that we are leaving with a bittersweet feeling. “