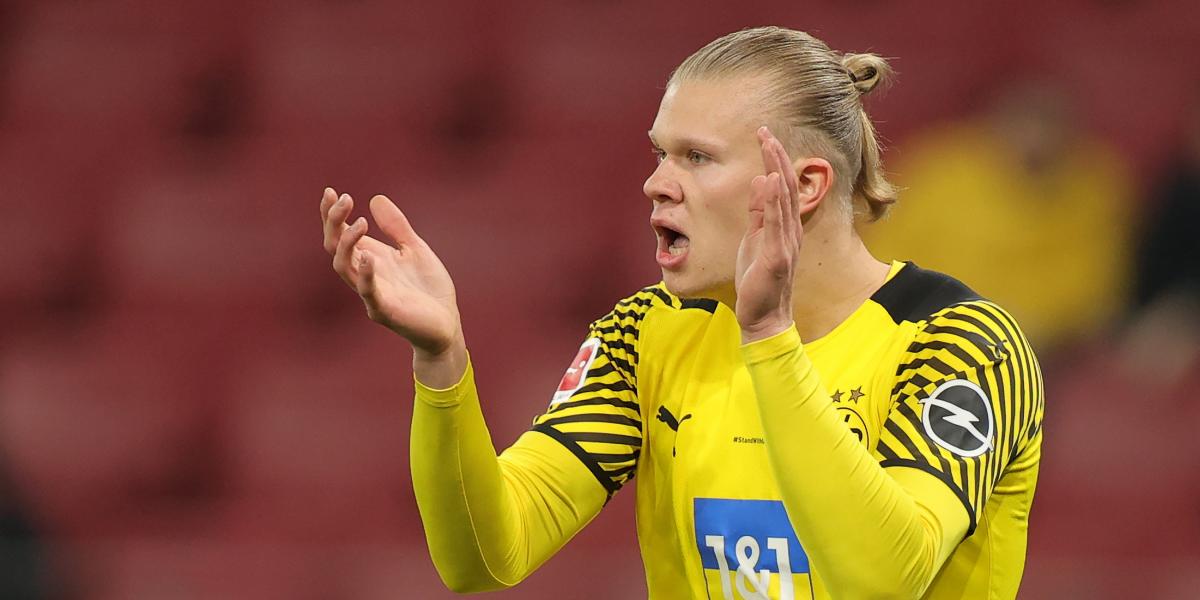 07:00MARC ROCA COULD RETURN TO LALIGA

Marc Roca could return to LaLiga Santander, but not to Espanyol, in principle… The former Blue and White midfielder is not having continuity at Bayern Munich and could end up on loan at Betis next season, according to various Andalusian media in the last hours

The ‘Monito’ Vargas is making good use of his loan to the Turkish Adana Demirspor, as several clubs in the Ottoman country are already raffling off the Argentine winger from Espanyol, according to various Turkish media. Demirspor do not have a purchase option on Vargas at the end of the loan, so clubs like Fenerbahçe or Basaksehir have already asked about the Argentine.

According to various Dutch media, the former Manchester United and Real Madrid striker will make the leap to the first team next season. Van Nistelrooy began his career on the bench in the lower categories of the Eredivise team and is currently in charge of the reserve team.

Ángel Di María ends his contract with PSG on June 30 and his future has not yet been decided. His father Miguel commented on Radio La Red about his possibilities when asked about the option of landing in Boca. “We don’t know what will happen after the middle of the year. I would like him to play one, two more years in Europe and then come back. I don’t know if Ángel would come to Boca. He wants to finish his degree in Rosario Central, he already said so. Hopefully he can make it,” he said.

Real Betis
has made official this Tuesday 29 the renewal of the Catalan center-back Edgar González
for two more seasons, until June 2025. Edgar, a native of Sant Joan Despí and who will turn 25 in April, trained in the Espanyol and Cornellá youth academies, arrived at Betis in 2018, and in the 2020/21 season he played on loan at Real Oviedo in LaLiga Smartbank, playing 38 games, scoring three goals and providing one assist. This season he is one of the most used footballers by Pellegrini, since he has already played 25 games in all competitions and played more than 2,000 minutes.
MORE INFORMATION HERE.

16:29THE ATHLETIC MAN IS CLEAR ON HIS POSITION ON JOAO FELIX

For Atlético de Madrid there is no Joao Félix case. The mattress club has received with surprise the words of Joan Laporta, president of FC Barcelona regarding one of its stars, Joao Félix. “I like Joao Félix a lot and his representative knows it. He’s a great player. We looked at making the change this past summer and it couldn’t be done. Atlético didn’t want to part with him. I hope no one gets angry at Atlético for this”, explained the president of the culé team in words to ‘Rac1’.
MORE INFORMATION HERE.

15:01THIS IS THE BAG OF THE FORWARDS IN BARÇA

The transfer market is at a boiling point at Barça with the appearance of crack names, with the option of continuity for some who are already there and the unknown of someone who plays on loan to a third club. In recent days, President Joan Laporta has made statements, in interviews in Mundo Deportivo and RAC1, clarifying the panorama of some of the future ones. This is the situation of all of them at the moment.
MORE INFORMATION HERE.

According to the Daily Express, Chelsea could bring 21-year-old Ivorian Marc Guehi back to Stamford Bridge next summer as they have a hidden clause to re-sign the Crystal Palace defender.

If this scenario occurs, Real Madrid will put him up for sale to make money, they have no intention of starting the season with a player of his caliber about to expire. There is no shortage of clubs interested in the Mallorcan, from Arsenal to Liverpool,
going through Milan, which has been on the wish list for a long time. At the moment there is no negotiation, but nothing can be ruled out, according to Calciomercato

13:15THE ATHLETIC ALREADY KNOWS WHEN HE WILL BUY GRIEZMANN

According to Deportes Cuatro and Goal, there would be no obligation to sign the Frenchman in the next summer market by Atlético de Madrid. 50% of the minutes that would make the purchase clause mandatory would be computed over the two loan seasons, not just one

13:00SERGIO ASENJO, IN THE ORBIT OF ESPANYOL

Espanyol would be working to get the services of Sergio Asenjo, Villarreal goalkeeper. According to ‘Tiempo de Espanyol’, the Blue and White team would take over the goalkeeper from Palencia, who would arrive in Cornellà-El Prat with a release letter after finishing his contract with his team, along with Joselu and Brian Oliván

12:37THE LAZIO THINKS IN SERGIO RICO

Lazio is thinking of signing a guaranteed goalkeeper this summer because Strakosha has signs of leaving. And in Italy, Il Corriere dello Sport points out that the Roman club has two names on the table: Marco Carnesecchi (21) and Sergio Rico (28). The first, on loan to Cremonese from Atalanta, seems to be Maurizio Sarri’s favourite, ahead of Sergio Rico on loan to Mallorca from PSG

After signing the Colombian Luis Díaz in the winter market, Jürgen Klopp’s team is now going for Otávio (27), the Portuguese midfielder who has a cancellation clause of 60 million euros, according to the Portuguese newspaper ‘A Bola ‘

11:40THE JUVENTUS, OBSESSED WITH THE ATHLETIC

Atlético de Madrid will have to be careful next summer: Juventus wants to take several players. First there was already talk of Renan Lodi and now it is also said from Italy that they want Rodrigo De Paul. But the Argentine midfielder, who joined Atlético from Udinese last year for 35 million euros, is determined to succeed in the mattress box.

11:31ROME WILL NEGOTIATE FOR GUEDES IN APRIL

In the last few hours, the journalist Nicolò Schira assures that Roma, who were already known to want Gonçalo Guedes, have set a date for their offensive for Valencia’s Portuguese midfielder. He says that it will be during the next month of April when talks begin with his agent, Jorge Mendes, knowing that the Ché club will put him on the market for a price of no less than 40 million euros.

Ángel Di María’s father, Miguel Di María, has confirmed to Radio La Red that his son will one day return to Rosario Central before retiring. There is no proposal to extend his contract from Paris Saint-Germain. Remember that the current agreement expires in June

11:31MEETING BETWEEN MILAN AND REAL MADRID

In the coming weeks, according to Calciomercato, there will be a meeting between Milan’s sports director, Paolo Maldini, and Real Madrid in which the possible sale of Brahim and the possible signing of Luka Jovic by the San Siro team will be discussed

Atlético de Madrid plans to reinforce the defense for next season. Felipe ends his contract and his renewal has been stopped for weeks. The usual names (David García or Milenkovic) have been joined in recent hours by Edmond Tapsoba (Leverkusen). This is stated by the newspaper A Bola, which highlights that the former Vitoria Guimaraes is very much to the liking of the mattress sports management

11:31ISMALA SARR AND HER SUITS

It is almost a fact that the Senegalese Ismaila Sarr is going to leave Watford this summer. For him is a Newcastle United that will have to pay about 40 million euros if they want the footballer, as well as a Liverpool that also seems interested. Sarr, 24, with two years remaining on his contract, joined the Hornets in 2019 from Rennes.

Cody Gakpo will have the opportunity to move to Arsenal, reports ‘Eindhovens Dagblad’. The London club have a very specific interest in acquiring the 22-year-old left-back from PSV. Flattered by the interest, Gakpo knows that there are more suitors. Bayern Munich, one of his ‘dream clubs’, is also interested. PSV, in any case, will not ask for less than 40 million euros

FC Barcelona will go for the Chelsea captain, who activated the clause to have him for one more year just before the British government sanctioned Roman Abramovich. The Barça club will negotiate if necessary with the ‘blues’ although ‘Azpi’ will try to manage his free exit. At the Camp Nou he likes him a lot because of his experience, knowing how to be and his versatility and a profile similar to that of Puyol is seen in him: leader, sense of group, nobility and discretion

11:30THIS IS HOW LEEDS RATES RAPHINHA

If the English club manages to stay in the Premier League, they will not sell the Brazilian winger for less than 50 ‘kilos’. Leeds has the transfer of Ferran Torres to Barça as a reference to value its footballer. Despite the fact that the Valencian is three years younger, the English club sees in Raphinha a profile very similar to that of Ferran. Therefore, if City valued Ferran at 55 million, plus another 10 in variables, Leeds will not ask Barça for less than that amount for Raphinha

11:30SUPER OFFER FROM BAYERN TO MAZRAOUI

Bayern Munich is making a big effort to bring in Noussair Mazraoui. The German branch of Sky Sports reports that a meeting took place in Amsterdam last month between the 24-year-old winger and a delegation from the German champion. The TV channel claims that the Bavarian club have made a ‘very good offer’ for Mazraoui, who is also on Barca’s radar, to move to Munich.

11:30A DEFENSE FOR COLORADO RAPIDS

MLS’s Colorado Rapids acquired 22-year-old Ecuadorian defender Gustavo Vallecilla on Monday from FC Cincinnati. He is already an international with the Ecuadorian national team, with which he debuted last December

11:30JOSELU WAS VERY CLOSE TO SEVILLA

Alavés striker Joselu Mato has acknowledged that he was close to signing for Sevilla last summer, but in the end the option was not given as the negotiations between the two clubs did not materialize. The scorer born in Germany but of Spanish origin will be released on June 30, when a new possibility opens for the Nervión team

Transfer market, live | All the rumors, transfers and transfers of football today, live