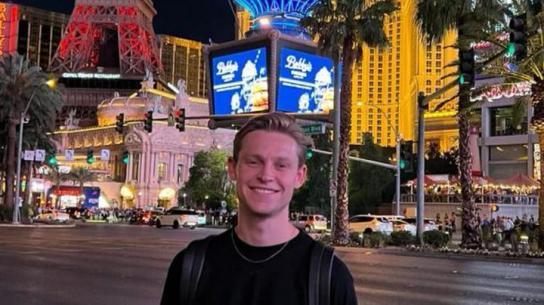 The Man Utd keep pressing for Frankie de Jongmidfielder of FC Barcelona which is on the market. The Catalan club is open to studying proposals that are between 80 and 100 million euros, while the English team has the ‘oranje’ international as its main objective for this summer. In fact, in a stolen video that went viral on the networks, the CEO of the Manchester UnitedRichard Arnoldassured some fans that he had executives working in Barcelona to close the signing of Frankie: “We are doing everything we can to bring DeJong and I tell you that the money is there for him”. And he added in said talk: “As a club we are doing everything possible to close the deal, the money is there but there are obstacles in our way that I cannot explain.”

The footballer, for his part, is calm and on vacation in Las Vegas. In fact, he didn’t seem to have much intention of leaving the Barcelona, despite the fact that during the concentration with the Netherlands in the Nations League he left the door open on a couple of occasions to change the scene. Of course, before finishing the season with his national team, in his last statement he once again recalled that he was “in the best club in the world”. Secondly, DeJong and from their environment, they have always said that if they have to go out they want to do it to a team that next season plays the Champions League. And this is not the case of United, who cannot guarantee that they will be able to win titles in a league as competitive as the Premier in one year or qualify among the top four to be in the Champions League.

From the ‘red devils’, with Erik youin Hag up front, they keep pressing to convince the Dutch midfielder. They want him to be their franchise player and he is a priority for the coach. The trust they place in him contrasts with the one inside FC Barcelona. It should be remembered that Xavi Hernandez He will be delighted that he continues, but even the Egarense coach publicly assumed that Frenkie could be transferred due to the economic situation that the culé entity is experiencing. Moreover, in recent days, sources from the Barça club no longer hide the club’s will to cash in with the Dutchman and assume that they are already studying offers for him.

Edward Romeu, economic vice president, insisted that they have not budgeted any income from transfers for this year, but no one is unaware that entering a minimum of 80 million for Frenkie de Jong, 25, would considerably help the club’s financial ‘fair play’ . In addition, it would also release wage bill since it is estimated that the Dutch midfielder should earn around 19 million gross next season.

Ultimately, an output DeJong, whose contract with Barça ends in 2026, would be a breath of fresh air for the economy and to be able to face other signings. What Lewandowski, Koundé or Bernardo Silvathe player that Xavi has asked if there is no other choice but to sell Frenkie.

Frenkie de Jong is not having the leading role that he has had in his other seasons as a FC Barcelona player. We leave you all the updated statistics of the Dutch midfielder

The transfer of Frenkie de Jong, in his hands