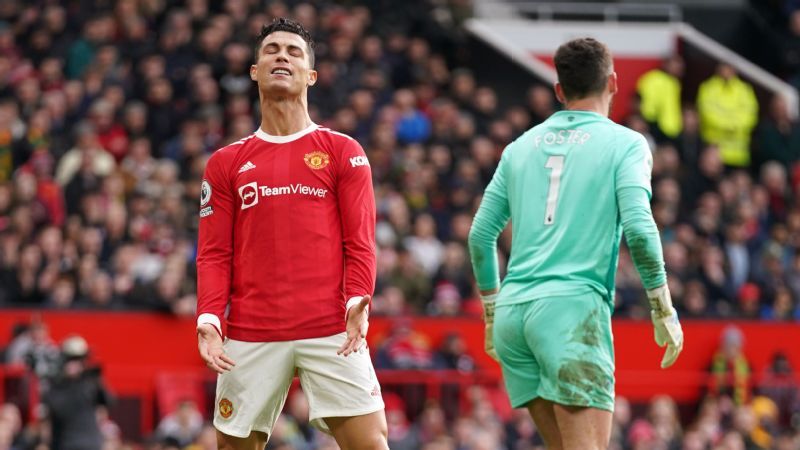 Leo Messi he was booed by Paris Saint-Germain supporters on Sunday. One day before, Cristiano Ronaldo scored a hat-trick for Manchester United and chatted with NFL icon Tom Brady in a post-game celebrity gathering at Old Trafford, conveniently in full view of the cameras, on the field of play, for the whole world to see .

These two moments could not have been more contrasting for two players who have dominated world football for almost 15 years. But appearances are deceiving, and Cristiano’s virtuoso performance against Brady masks the reality of his time at Old Trafford since he returned to the club 12 years after joining Real Madrid from Juventus last August.

Prior to his hat-trick against Tottenham, the 59th of his extraordinary career, Ronaldo had only scored one goal in 2022. One goal in 10 appearances, to be precise, and had been relegated to the bench by caretaker manager Ralf Rangnick for a game at Burnley. during said period. His absence from the team in the 4-1 loss to Manchester City on 6 March, officially attributed to a hip injury, saw the player return to Portugal accompanied by headlines suggesting that he was unhappy at United and ready to leave for summer.

Doubts about Ronaldo’s presence in the United team have grown in recent weeks: is he capable of playing as a centre-forward? Is his age already showing (37 years)? Has United foolishly sacrificed team ethics to accommodate him? These are all questions that continue to be raised every time Cristiano doesn’t do what he did on Saturday, when he played like a man 10 years younger.

Messi’s story at PSG is similar. The Argentine, three years younger than Ronaldo, was signed by the Ligue 1 leaders to become the final piece of the Champions League team’s puzzle. The idea, which makes sense from a fantasy football point of view, was that a forward made up of Messi, Neymar and Kylian Mbappé would be unstoppable in Europe’s top competition. However, reality always trumps fantasy and Messi was booed during Sunday’s win against Bordeaux (Neymar was also the target of the booing), as PSG bowed out of the Champions League in the round of 16 after squandering an aggregate lead. 2-0 against Real Madrid in the last half hour of the second leg.

Messi, a player who once dominated the competition and won it four times, contributed nothing more than a missed penalty kick in the first leg. He scored five goals in seven Champions League games, including two against RB Leipzig that secured a 3-2 win, while a surprise goal against Manchester City last September led to a 2-0 victory in Paris. But PSG signed Messi to deliver better results than that, or the two goals he has scored in 18 league games so far. He was signed to win the Champions League, but PSG has already been left out and Messi has not been able to make a difference.

Still, PSG should be back to make another run at the Champions League next season. A 15-point lead at the top of Ligue 1 ensures they will win the French title and will give Messi something to celebrate. It will also give him something of an advantage over Cristiano, who will end the season empty-handed unless he can inspire United to a highly unlikely Champions League win in Paris in May. (They will host Atlético Madrid on Tuesday with a 1-1 draw after the first leg.)

Although the reinstatement of Cristiano Ronaldo was a nostalgic trip with a huge commercial boost for United, he was signed mainly to make Ole Gunnar Solskjaer’s side serious contenders for the Premier League title. However, Solskjaer was sacked in November and United are hopeless in the title race, they will even struggle to finish inside the top four, with Arsenal a point ahead and enjoying the luxury of three games under control.

Cristiano joined the team with the aim of ending his United career with a trophy, but his first season will be blurred into nothing more than a run to avoid playing in the Europa Conference League next season. His 18 goals in 32 games may not count for anything.

It’s okay, there were brilliant moments for Messi and Cristiano. Messi’s goal against City was probably the best thing for the PSG star, while Cristiano has his hat trick for Spurs and a few game-winning goals in the Premier League and Champions League. But has any of that really been valuable to United or PSG? Have Messi or Cristiano really made their teams better? Neither has helped their respective clubs achieve their goals and, at times, both have been a distraction from the necessary but demanding job of team building.

It hasn’t exactly been like Last Dance, the ESPN+ series about Michael Jordan and his final season with the Chicago Bulls, for either of them. Messi’s time in Paris has been a tale of missteps and dissatisfaction, while Cristiano has been like a lonely artist missing his dance partner.

And the truth is that things may not get better. With another year and more pressure to achieve the expected results, no one can say that everything will improve for them next season.