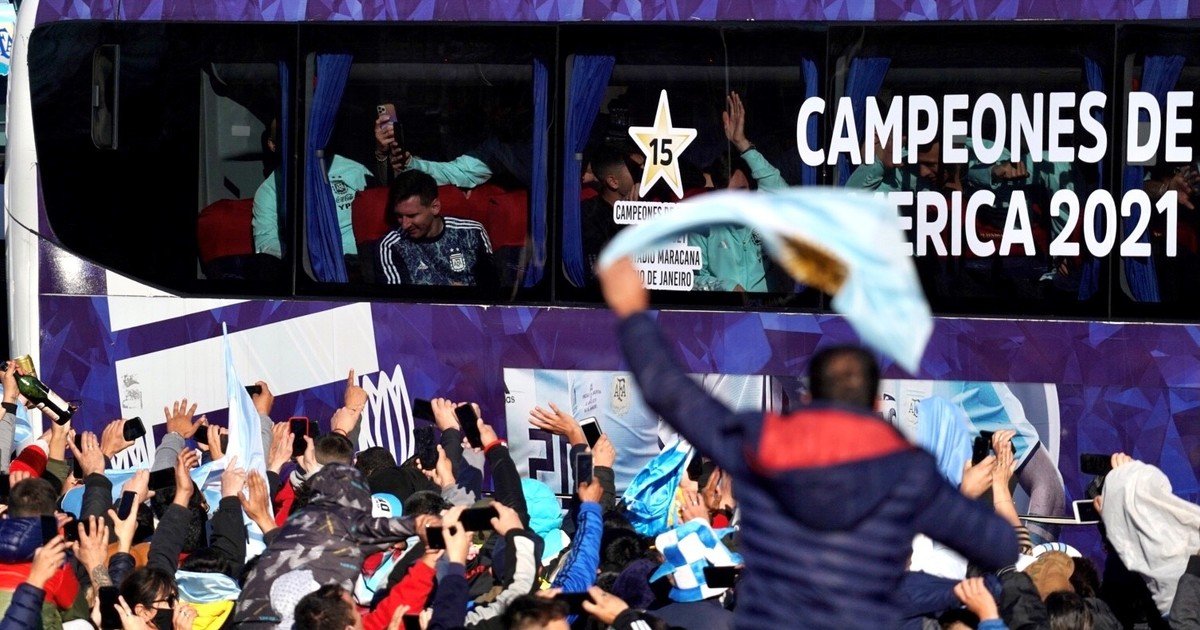 The wait is over: The champions are finally in the country! After the historic consecration in the Copa América against Brazil and the Maracana, and after a delayed return, the National Team got on the plane and, after almost three hours of travel, landed in Argentina at 8.43 in the morning.

With a crowd waiting early outside the airport and at the gate of the Ezeiza property, The campus was divided into two buses plotted exclusively for the occasion and they left directly for the property. The trip, which in a normal situation does not usually last more than five minutes, lasted for more than half an hour for the large number of people who came to receive Leo Messi and company.

Although initially the champions were scheduled to parade in a bus on July 9, finally the authorities decided not to do it for avoid more massive concentrations of the public in this health context to respect the group health bubble.

For this same reason, the President’s visit was also questioned Alberto Fernandez, who had planned to visit the soccer players on the AFA grounds. However, with the passing of the hours, this possibility began to lose force.

There is also uncertainty about the possibility that the players they meet again this Sunday with their relatives, after more than 50 days without being able to see them. The intention was that the footballers rest 24 hours more in the bubble of the property and then give them the freedom to reconnect with their families. However, it is not ruled out that they can finally meet this Sunday.

Within the AFA premises, also everything was ready to receive the champions, with fireworks, papers, a huge America’s Cup and other billboards from the entire campus.

The party before leaving for Buenos Aires

Alegria não tem fim. And if not, ask the National Team that not even the delay of the plane that was going to bring them to Argentina could stop the festivities. And the proof was shared by himself Rodrigo De Paul, that after what ran in the final against Brazil, of delivery and sacrifice in the 90 minutes, on top of that he gave us a few seconds of the privacy of the campus above the plane, just before take off.

With LA well-guarded glass, some glasses in hand and pure cumbia, the players put a wave to waiting until 5.56, when the plane finally began taxiing to bring them to the country.

In the video that De Paul shared from the plane -the star cameraman- you can see a good part of the squad, including Angel Di Maria, Angel Correa, Nicolás Otamendi, Nicolás González, Joaquín Correa, Nahuel Molina and Julián Alvarez, among others, enjoying the celebration. Although at the time of takeoff, the cameras were turned off, surely the party continued already in flight.