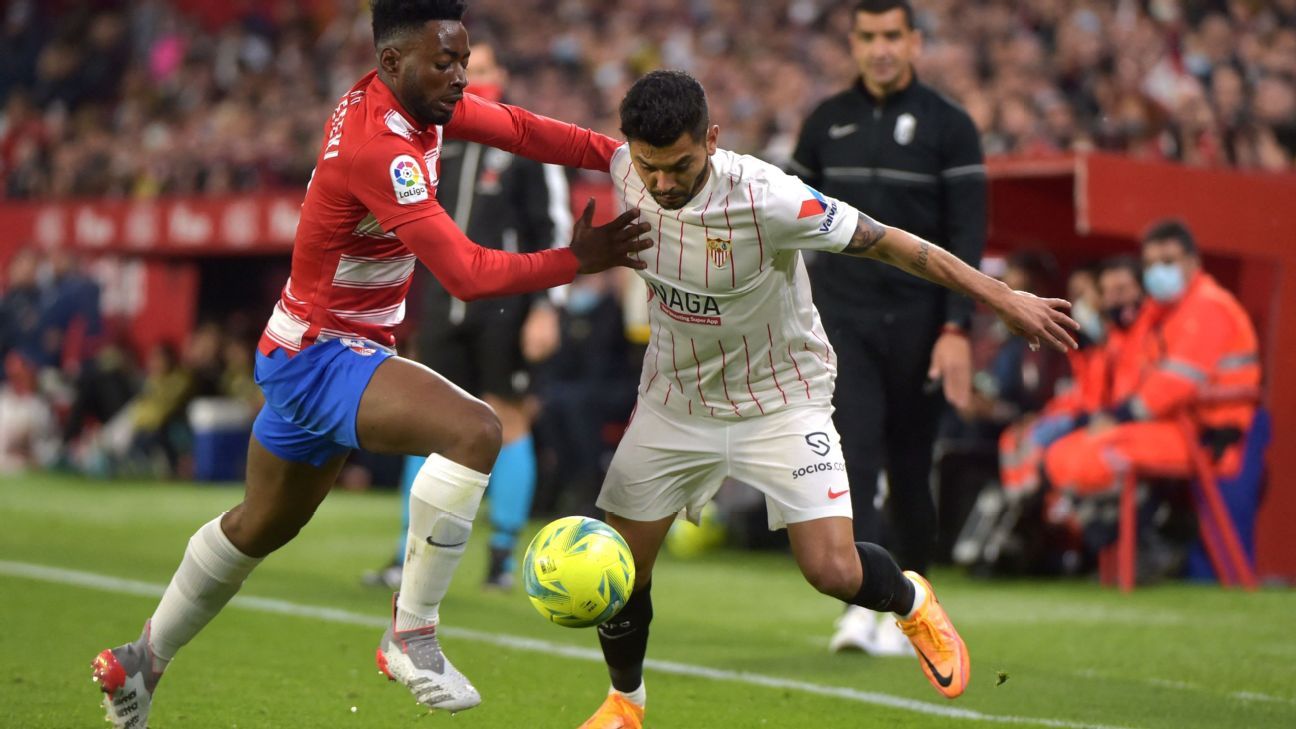 SEVILLA — Sevilla won 4-2 against a Granada that never gave up and is entrenched in the Champions League positions after a hard-fought comeback driven by Diego Carlos when he drew 1-1 in the first half, then Lucas Ocampos continued with the 2-1 and, although Víctor Díaz equalized, Rafa Mir and Papu Gómez certified in added time.

After not being a starter in the 1-0 defeat against Barcelona, ​​’Tecatito’ returned to Julen Lopetegui’s eleven and started as a left winger, but would end the first half playing on the right wing, exchanging his place with the Argentine Lucas Ocampos .

In the first 45 minutes, Corona was one of the Andalusian team’s players who showed the most participation, although he failed to generate a clear chance of danger. However, in the area of ​​passes, the former Porto player registered a high effectiveness in the first half with 91% (30 successful passes out of 33 attempted). The Aztec delivered two key passes, stood out with six recoveries, although in individual duels he registered negative numbers with only 3 of 8 duels won.

After a first half of clear Sevilla dominance, the Venezuelan Darwin Machís, in an isolated attack in the middle of this period, put Granada ahead, although the Brazilian Diego Carlos neutralized his goal shortly after and, already in the second, the Argentine Ocampos came back with suspense, after the VAR validated his goal, and although Granada equaled two, Mir and the Argentine Papu Gómez tied the victory in minutes 93 and 99.

Two needy teams were measured, although for very different objectives: Sevilla, after four games without winning (3 draws and a defeat last day at the Camp Nou) to strengthen their position as ‘Champions’; and Granada, with a single win in the last 12 games, to gain peace of mind by moving away from the relegation zone.

The Sevilla coach, Julen Lopetegui, made three changes compared to the eleven of the last defeat against Barcelona (1-0), with the Mexican midfielder Jesús ‘Tecatito’ Corona, the Moroccan striker Youssef En-Nesyri and the Swedish left-back Ludwig Augustinsson , by the Serbian Gudelj, the Argentine Erik Lamela and the Dutch Rekik, the latter injured.

In Granada, the coach Rubén Torrecilla presented five novelties regarding the last draw at home against Rayo (2-2), with the Albanian full-back Uzuni, the central defenders Víctor Díaz and Raúl Torrente -who was injured and was substituted in the fourth hour by Germán Sánchez-, the Cameroonian midfielder Yan Eteki and the Venezuelan attacker Darwin Machís as the main squire of the Colombian Luis Suárez in the lead.

Sevilla began this transcendental Andalusian duel with intensity, for different reasons, for both of them, but they always lacked clarity, finishing touches and perhaps more ambition, since given the good disposition of Granada, very disciplined but not very incisive, they controlled the game, touching and touching, although without any danger.

The first half was clearly dominated by the people from Seville, although they lacked a step forward in attack to really put a spartan rojiblanco team in trouble, sober and firm, without giving anything to their rival in defense and who, moreover, was very effective in his first clear scoring chance.

Thus, the Venezuelan Darwin Machís, in an isolated attack in the middle of this period, put Granada ahead by scoring, after stealing the ball on dangerous terrain, a good goal with the inside of his right foot in the 23rd minute.

However, Sevilla, despite their traffic jam and lack of ideas in attack, found the reward for their insistence and their harassment against the Granada area shortly after half an hour and achieved 1-1 through Brazilian defender Diego Carlos Santos , who headed a magnificent cross from the right by Jesús Navas.

The Sevilla captain was the most incisive with his incursions down the right of his team, lacking ideas and, although he controlled, he was unable to transfer his supremacy to the scoreboard despite a lob shot by Navas that the Portuguese Maximiano cleared for a corner, after Suárez headed it was a cross from MIla.

After the restart, the rhythm of the clash changed, it was more lively. Sevilla accelerated and, although Granada never gave up and Suárez looked for the goal in the 62nd minute in a shot that the Moroccan Bono, always very successful, sent to a corner, Lopetegui’s men pressed and found a prize in the 67th minute with a goal from Argentine Lucas Ocampos.

For the second half, ‘Tecatito’ returned to the left side of the field and the Mexican ended up being a carnation in this area by “accidentally” getting the assist for Sevilla’s second goal.

This 2-1 came with suspense, in an action by Tecatito Corona who gave Ocampos from the left to dribble Maximiano on his way out and manage to beat him, although in the first instance the goal was not conceded due to a possible offside by the Mexican. although, after intervening the VAR, he gave it validity.

Jesús Corona left the match at minute 83 and his place was taken by Óliver Torres. The Aztec finished with a pass effectiveness of 91%, six duels won out of 12 played, eight recoveries and one assist, his third with Sevilla in LaLiga.

Sevilla continued at his pace and, with the changes, especially with the entry of an active Rafa Mir, he was more vertical. The Murcian had a goal disallowed in the 76th minute due to a previous foul on Germán against an increasingly ambitious Granada, which had already warned with a shot by Albanian Myrto Uzuni that crashed into Bono’s left post.

The Uruguayan Arezo also tried in minute 88, but he ran into the Moroccan goalkeeper, until in that same minute the former Sevilla player Víctor Díaz made it 2-2 two minutes into the regulation 90 by heading in a corner taken by a talented Luis Milla .

However, Lopetegui’s men threw themselves into it, went for it all and found the prize for their best game and greatest ambition. They made it clear that they needed to win and they achieved it with the goals in the 9 minutes of extension decreed by the Mir referee, by clinching a header by Rakitic, and by Papu Gómez, by taking advantage of a good cross from Óliver Torres.