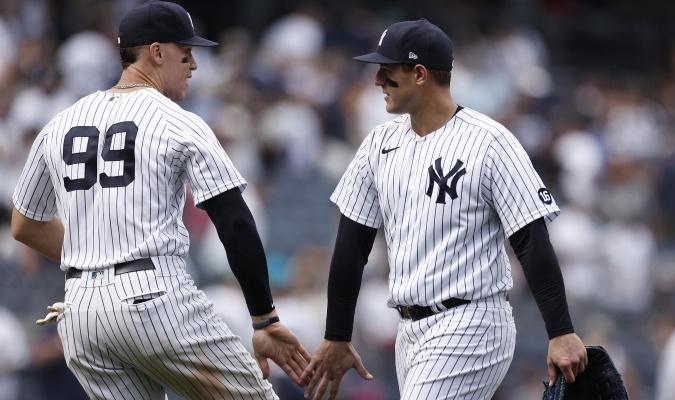 Anthony Rizzo and Giancarlo Stanton moved the MLB record lists in the clash between the Yankees and the Boston Red Sox. On the Opening Day between the two ninths, the two sluggers of the Bronx Mulos implanted marks involving Andrés Galarraga and José Altuve.

First baseman Anthony Rizzo was hit by a pitch from right-hander Nathan Eovaldi for the 179th time in his Major League career. This ball in his hand, in the upper part of the fifth inning, allowed him to surpass Andrés Galarraga (178) and reach the ninth place with the most balls received by a slugger in the Modern Era (Since 1900).

Read also: Miguel Cabrera equals another record in the MLB

Anthony Rizzo just reached base via hit by pitch for the 179th time in his career.

That passes Andres Galarraga and moves him into 9th place for most HBP by a player in the Modern Era (Since 1900).

The Yankees first baseman is one of the few players to top 30 home runs in a season and also get hit 30 times.

Also, Giancarlo Stanton hit his first home run of the season, against Eovaldi. With his home run line to right field, he equaled the Creole waiter José Altuve in the section of connected homers against the stellar Red Sox pitcher.

Giancarlo Stanton now has 3 HR against Nathan Eovaldi, tying Jose Altuve for the most off of Eovaldi

His connection made him rack up three career home runs against the red-footed pitcher. This same figure is the one that Altuve monopolizes in his record against Eovaldi, throughout his career in the Majors.

Read also: How many hits has Miguel Cabrera connected in the month of April?

The New York Yankees ended up winning the Opening Game in extra innings, by a final score of 6-5 in eleven innings. Nathan Eovaldi went no decision in five innings, allowing three earned runs, two home runs and fanning seven opponents. Rizzo was 1-for-3 and Stanton was 1-for-5 throughout the opening game.

Two Yankees players between brands of Venezuelans on Opening Day