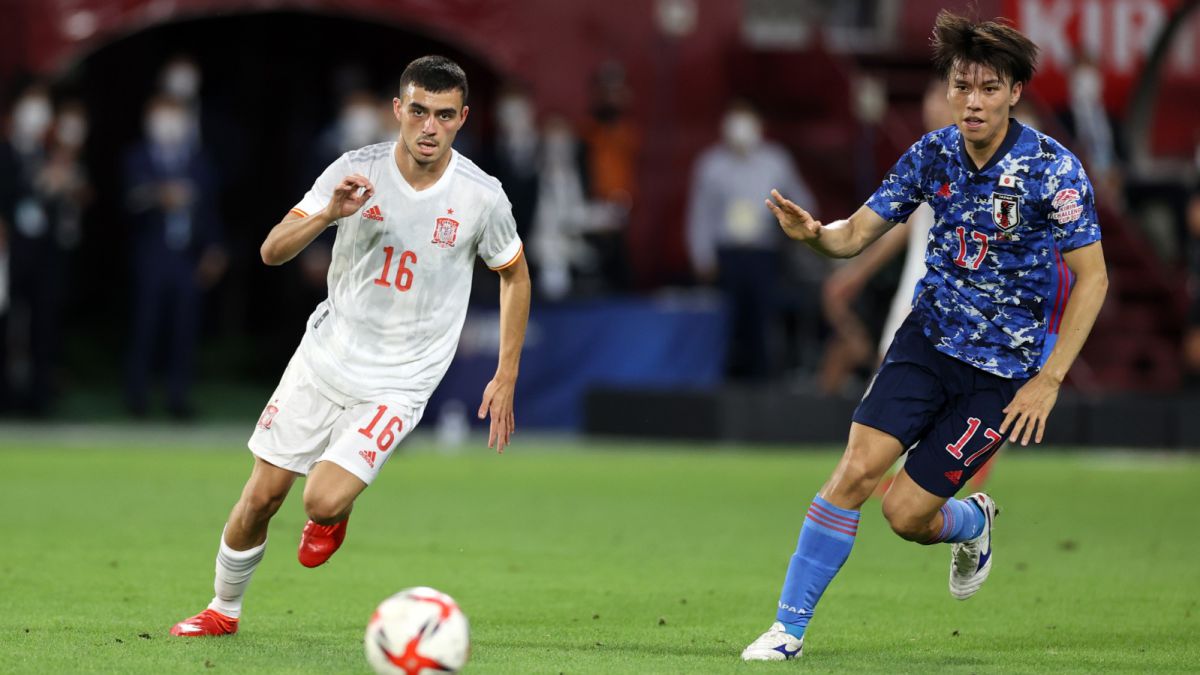 There were many voices asking for rest to Pedri after a strenuous season for him physically and, above all, mentally. That is the key factor for which the canary is in these Olympic Games: the fundamental thing was to know the state of his head, because his 18-year-old legs and his privileged physical capacity can withstand whatever is thrown at him. In just over half an hour the midfielder cleared up any doubts there might be about his presence in Japan, because his head is as fresh as in the first game of the season. He entered in 56 ‘and changed the face of an Olympic team that until then had been stuck to hurt Japan.

The draw against the hosts may seem like a stumbling block on paper, although that conclusion would be completely wrong. You need to put the game in context. Spain has been in Japan for just over two days, it is not adapted to the schedule (seven hours more) or to the extreme humidity conditions. For 16 of those summoned it was their first game of the season and another six (those of the Eurocup) came after a mini vacation after a demanding tournament. The rival, Japan, was not chosen at random: physically strong and adapted to the environment, because they are hosts. The objective was to suffer, because it is better to do it in preparation than in the first official match.

De la Fuente’s lineup leaves a first conclusion: the coach is willing to change his classic 4-2-3-1 and bet on a 4-3-3 to follow the model of the Absolute and be able to adapt to all the players he has in the midfield. Especially two: Ceballos and Pedri. In this first meeting they could not be seen together, because the canary replaced Utrera’s, but it is a promising society.

The Spaniards entered the game well, leaving samples of what the coach wants: intense pace, high pressure and ball control. The problem is that at this point in the season (or, rather, preseason) it is difficult to endure that for more than 15 or 20 minutes. It was that time that the initial gasoline lasted for Spain, long enough for Rafa Mir to test the Japanese goalkeeper and Ceballos to touch the goal after a good association with Dani Olmo.

After half an hour of play, the forces began to fail Spain. Something logical and, to a certain extent, expected by the coaching staff. There the Japanese began to stretch, playing their second preparation match. They found Kubo, who was the best of the game until he was replaced, and the first goal of the game was born from a good move by the madridista: overcame Zubimendi on the left wing and put a good back pass that Doan culminated with a left-footed shot to the squad. So, yes, you have to put an asterisk: there was a hand in the control of the Japanese. In the tournament there will be VAR, so most likely it would not have risen to the scoreboard. In any case, it is a minor detail in this game, in which the sensations were more important than the result.

In the second half the substitution dance began (up to eleven were allowed) and Spain improved thanks to fresh legs. Luis de la Fuente’s intentions were also clear: on Dani Ceballos and Marco Asensio wants to build the backbone of this Olympic. He endured both of them until minute 68 despite the fact that they finished the first half very tired, because he wants them to pick up the pace. He also showed that he is more convinced by the option of the false nine (Oyarzabal) than that of the natural striker (Rafa Mir), because at half-time the Real player entered the game and the associative game of Spain improved.

In 68 ‘, the game changed completely. Luis de la Fuente gave entrance to Pedri, who was a substitute so as not to burden him with unnecessary minutes. The canary became the owner of the game, he gave several fantasy passes and from his boots the play of the Spanish goal was born: he put a good ball to Miranda on the left wing and the Betis side assisted Soler so that, in semifallo, he could put the final tie. Pedri left half an hour as a different footballer, playing as the oldest of the team despite being the youngest. The only regret was not being able to see him with Ceballos and Olmo, who made several plays in the first half that invite optimism. That letter, that of bringing the three of them together, is saved by De la Fuente for next Thursday’s debut against Egypt.

In general, the only previous friendly leaves quite a few positive conclusions: those of the Eurocup arrive fresh, Pedri keeps his magic intact, Ceballos is in a great moment and Merino’s back is no longer a problem. As soon as they adapt to Japanese conditions, this Selection promises joys.