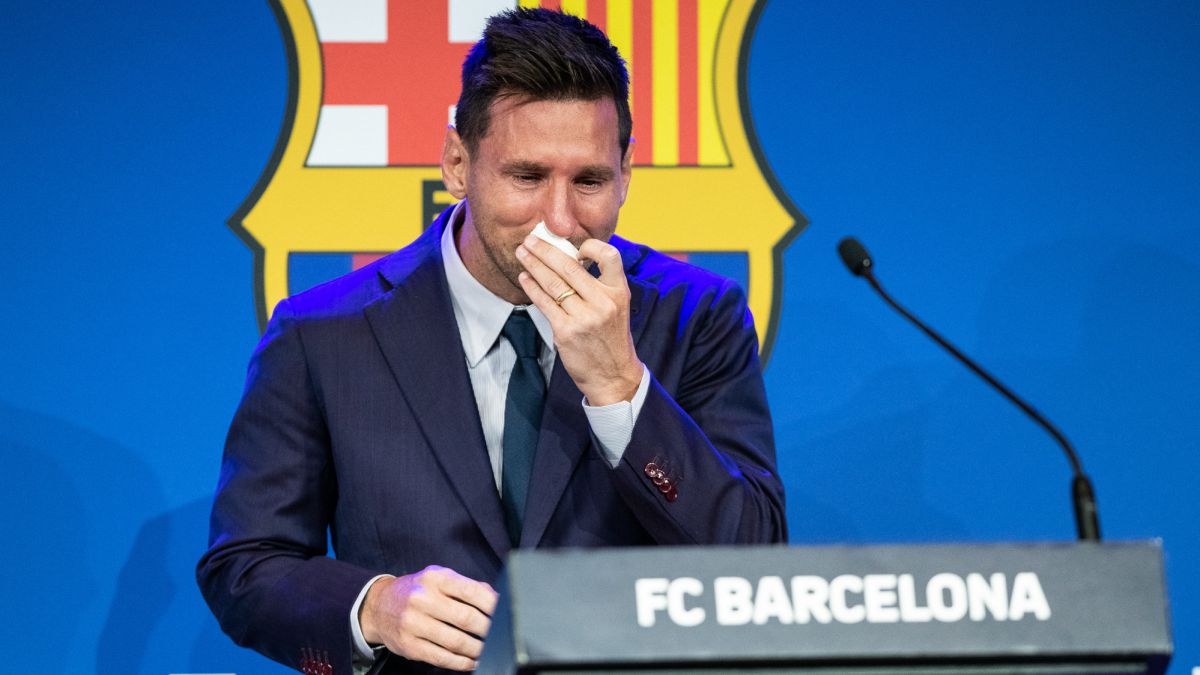 Leo Messi is already the history of Barcelona. The Argentine’s departure was at the level of what he has always done in the field dressed in short. Accustomed to solving the most complicated situations, Messi returned to arrange an exit that nobody just understood very well. Doubts remain about who bears the ultimate responsibility for his departure, but what is clear is that his departure was, as far as he is personally concerned, impeccable, exciting and worthy of being remembered.

After listening to Messi there is no doubt that he did not want to go; his scene breaking into tears as soon as he came on stage, the clarity with which he said that he had done “everything possible and impossible” to continue at Barça, that it was the club that saw the impossibility of giving continuity to the rules imposed by LaLiga, they do not leave room to certify that if someone leaves here with all the honors it is him. Others may not be able to say the same.

At 10.30 a.m., an hour and a half before Messi’s announced appearance, about fifty Barça fans crowded the fence that separated the esplanade from the stadium with the Auditori 1899. They wanted to say goodbye to Messi or, at least see him live, but the club’s security employees made them withdraw from that area. They wanted to avoid acts of maximum emotion or anger against someone. They gathered at the entrance to the Camp Nou. The crowd grew exponentially, forcing billboards to be put up on Arístides Maillol street.

Fifteen minutes late over the scheduled time, the doors of the Auditorium were opened for the huge press that was waiting to cover the event to enter. Slow entry because it was necessary to confirm that the vaccination dose was complete and show the relevant certificate. In the room, the brutality of trophies that the Argentine has won with Barça (with the notable absence of the Golden Balls) presided over the scene in front of the area destined for the squad. Ronald Koeman and delegate Carles Naval, another myth who will leave the entity at the end of the course, were the first to arrive while an army of protocol, press, external relations and presidential personnel tried to organize chaos.

The already ex-companions of Messi awaited the start of the act speaking in a group outside the Auditorium. An image that was painfully reminiscent of the one produced in mortuaries before the funeral begins. Faces of circumstances, someone who drops a joke to release tension, warm greetings … while, in the room, ten minutes before Angelus time, Carlos Naval, absolutely alone, admired the collection of glasses. It was a good time. It seemed that he was mentally reviewing those moments of glory that were about to pass into the history books and comics that in many years, the grandparents will explain to their grandchildren.

Just before the star appeared, his wife and children entered. When he sat down, the first thing he did was ask for some tissues, he used them to give them to a heartbroken Leo who came out on stage and couldn’t even speak. And when he did, it was devastating and exciting:

“I don’t know if I’m going to be able to talk. I thought what I could say and nothing came out, I’m pissed off as I am. This is very difficult for me, after all my life here. When the burofax mess started I was convinced, but this year do not. This year I was sure that I was going to continue here. It’s what I wanted the most. I surpassed our well-being, being at our home in this wonderful city, but I have to say goodbye to this. All my life here, I arrived when I was 13 years old and now I’m leaving with my wife and three Argentine Catalans. I cannot be more proud. I’ll be away for a few years, but I’ll be back. I promised my children. Thank the teammates, the club and its values, which are humility and respect. I had a lot of beautiful things here. I gave my all for this shirt from day one. Be grateful for the affection of the people, I never imagined my farewell. Perhaps with people in the field, with a last ovation, I missed them a lot when we could not play with the public, celebrate a goal. If I imagined it, it was with the stadium full, chanting my name. I always felt their affection, recognition and love and I hope I can return at some point to be part of this club. “

There the ovation was unleashed that until that moment had not had in the field. With the audience on their feet, two minutes that caused a new sea of ​​tears.

In question time, Leo, already calmer, contributed some clues to his departure.

He confirmed that “Laporta told me that everything was fixed and then because of the LaLiga issue it was broken. It couldn’t be done. I do not know if they did everything possible, I do have it clear. I did my best and the impossible to stay. Many things were said that are not true, I heard many things. I did the impossible, last year I didn’t want to and I said it, now I wanted to and it couldn’t. My salary had been lowered by 50 percent, the rest is a lie. “

Messi acknowledged that he does not feel “cheated by anyone, only disappointed. The contract could not be closed by the League. But I have nothing to say to Tebas, I never said anything to him, the times that I crossed it, we greeted each other normally, period. I have no problem with him. “

That he has thrown in the towel when there are still more than 20 days left for the market to close, which was another of the great unknowns in this case, also found an answer from Messi: “The deadline was set by the president, the club had a very big debt and why throw it away more if it seems impossible and I also have to think about my career “.

A career that will surely continue at PSG, “a team with which there are conversations, but nothing is closed because there were many calls when the statement came out.”

So it ends, for now, because Leo assured that he will return for a tribute and to help in the future, the history of Messi at Barça. Leo himself recognized that this is the hardest moment of his career, more than any defeat, because “They had the option of revenge, now this one does not return.” The grief was total.