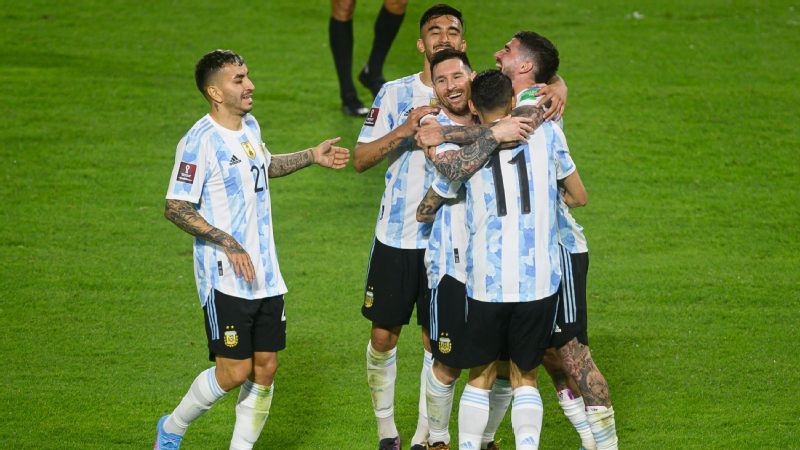 Choose the disappointment you want from the race of Leo Messi with Argentina. After all, there is a lot to choose from.

How about 2010, when, at the peak of his career, Messi was managed by Diego Maradona at the World Cup and Argentina was crushed in the quarter-finals by a group of German upstarts? 2014 may throw you more, when Argentina did not give up a single shot on goal in regulation time in the World Cup final against Germany, but Gonzalo Higuaín missed a counterattack shot and Mario Gotze converted the goal of the century in the last breath.

A year later, in the Copa América final, Higuaín misses another escape, the game goes to penalties, Messi converts the first, all the others from Argentina fail, and Chile becomes champion of South America. A year later, in another Copa América — this time in the United States — Argentina beat Chile 18-4 in shots in the final, Higuain missed another breakaway, they went to penalties, Messi missed the first and Chile won again. Shortly after the match, the winner of the last Ballon d’Or announces that he is retiring from the Argentine national team at the age of 29.

If you can, remember that moment for a second and soak in it: the king of football at club level gives up after a decade of frustrations in international football. Back then, it would have been impossible to understand where we are today: Messi’s career in club football has become totally secondary, and he enjoys life with Albiceleste.

The shortened version of Messi’s career to 2020 goes something like this.

A little boy from Rosario, Argentina, is considered too small by all the coaches, until he makes his way onto the pitch and leaves everyone in awe by dribbling past bigger kids like lightning. However, the little boy was still tiny: at 12 years old he was less than five feet tall. His father decides that he needs treatment with growth hormones, the treatment is expensive. Barcelona finds out about this mini-phenomenon, and the father tells Barça that he can have his son if he pays for their transfer and continues the hormonal treatment. A contract is signed on a napkin, they move to another continent, and the boy becomes the greatest footballer of all time (by many), as his individual genius was molded within the collectivist football factory known as La Masía. .

As a former Barcelona youth coach said: “[Messi es] a fusion of the individualism of Argentine street football and the more team-oriented game taken from the Barcelona philosophy”.

However, the success he had in Barcelona never carried over to his senior team, until he finally won the Copa América in 2021. The biggest reason: chance. Argentina reached so many tournament finals and so many extra time and penalty shootouts that they should have at least been lucky enough to win a trophy with a lucky rebound.

Of course, it is not the only reason. The fluid and at the same time strict positional system that Pep Guardiola instilled in Barcelona did not exist when Messi changed the blaugrana stripes for the albicelestes. Most coaches — and in particular Maradona, who opted for a “central four” system that has never been used again — had an unimaginative, defensively stable approach that depended on Argentina’s stars (read: Messi ) did something magical a couple of times a game.

“The problem is that Messi has not been able to play his natural game with Argentina, a team that on too many occasions has relied on that moment of genius to save itself,” said Andreas Campomar, author of “Golazo! From the Aztecs to the Cup del Mundo: The complete history of football in Latin America”, before Russia 2018. “The system that you find in Barcelona has not existed at an international level”.

And with the problems, came the question of identity. In 2004, Spain tried to recruit Messi to switch his allegiance to the country where he had spent his entire professional career and his adult life. Can you imagine it? But he wanted to go home.

While Messi was admired and appreciated by the Argentine fans in the same way that one can admire and appreciate a celestial body that cannot really be understood, Maradona was adored and fiercely loved. The same thing happened with Carlos Tevez, a player who was nowhere near Messi’s level, but was clearly more human and had started his career in Argentina with Boca Juniors.

“While there is some truth to this opinion, I fear that Messi’s strained relationship with Argentina has been somewhat exaggerated,” Campomar said. “Part of the reason, however, may be the fact that he left Argentina and went to Barcelona at the age of 13 and never played with a senior domestic team; another part of the reason may be his natural reticence.”

“Messi speaks like an Argentine; he has an Argentine diet: he is culturally Argentine. However, he does not have the same strong personality, like, for example, Maradona. Perhaps he is too humble for an Argentina that demands superhuman strength from its heroes.” .

Which brings us to Friday’s 3-0 win against Venezuela in Buenos Aires, at La Bombonera de la Boca. Argentina, reigning Copa America champion nation, had already qualified for the World Cup. The game wasn’t important, so they just went to have fun. It was one of the first times that Messi put on the Argentina shirt and everything seemed easy, carefree and under control. Messi scored the third, kicking the ball before letting it bounce and – this must be emphasized – he began to laugh as the ball went in and touched the net. It was Argentina’s last competitive home game before the World Cup, and the whole load seemed to have disappeared.

Argentina closed the qualifiers on Tuesday with a 1-1 away draw against Ecuador, although it still has a pending match against Brazil (suspended due to a security incident) that will be played in the run-up to the World Cup and will not influence the table. Messi participated in the play of the Argentine goal in Guayaquil, where Ecuador tied on the hour.

Messi has already been booed by Argentine fans — in a World Cup match, in a tournament where he ended up winning nothing more and nothing less than the Ballon d’Or — but that is no longer the case. La Bombonera loved him last week. But now, he is being booed by fans of his club: Paris Saint-Germain.

This European season has felt like a half-awake dream, with Messi existing elsewhere, rarely appearing in the collective consciousness rather than constantly center stage.

The greatest finisher alive is in the midst of the worst streak of his career. He has been a supporting actor for PSG in the Champions League, firmly in the shadow of Kylian Mbappe. In previous seasons, his missed penalty against Real Madrid – in a match they lost 3-2 – would have been a central topic of debate after the collapse. Are we sure that Messi is a decisive player? Instead, this time the issue dissipated.

We are still in March and the rest of their 2021-22 campaign will play out following the flow of a team that will easily win a league title that PSG almost always win easily. These matches mark the twilight of the greatest player of all time. And yet, who cares?

I don’t know what Messi is thinking; we’ve never really known. With Cristiano Ronaldo, there is very little subtext; everything is on the surface. With Messi, on the other hand, almost everything is subtext. The most important thing that we have been able to learn regarding his psyche has been the fact that he used to vomit before games. As the great Uruguayan writer, Eduardo Galeano, once said: “I like Messi because he doesn’t think he’s Messi”.

But anyway, it seems that Messi is finally enjoying playing with Argentina, while his work with PSG feels like a burden, almost like a nuisance. With Argentina, he has a team built around his increasingly limited movements; he is the experienced mind, the one with the clever passes, the one who is leading a generation of young stars while his contemporaries are now moving onto the coaching staff. With PSG, he’s just another star in a squad built like a basketball team. It would seem that he is playing full-time with Argentina and part-time with PSG.

The numbers also make this situation clear. Since the start of June, Messi has played 84% of the minutes available in competitive matches for Argentina – the most minutes of any player, including starting goalkeeper Emiliano Martínez. With PSG, he has only played 55% of the minutes in Ligue 1.

After the Venezuela game, Messi said, “I don’t know what I’m going to do after the World Cup. I’m thinking about what’s to come. After Qatar I’m going to have to evaluate a lot of things.” Argentina may not end up winning the World Cup, just like any other team may not win either. But the team is in its best form since 2006, and the jersey is no longer a heavy burden for him.

What is more likely for Messi? A first World Cup title or a fifth Champions League trophy before he decides to retire? At least for this year – and perhaps for the first time – we should stick with the first option.

Lionel Messi takes a 180-degree turn in the Argentina/PSG relationship: he triumphs with his country and does not perform with his club