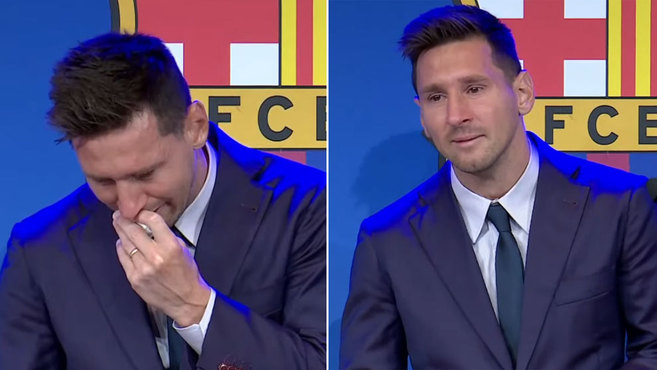 Dear Àlex, the truth is that I don’t know how to start these lines. Leo leaves and there is no solution. At last it seems that some have tried hard enough tenacity and stupidity to get Messi to leave Barça And, worst of all, do it wrong, sad, disappointed and of course angry with some people who gave you false hope. I listen to opinions, information, cabals of all kinds, for all

the channels, some made more from the heart than from the reason.

A lot has been lied knowingly, but today anything goes

. Since Leo arrived in Barcelona and Barça, he has run into a lot of people. Some, perhaps more than necessary,

they used it for their own benefit

Abusing his situation in the beginning, of his good faith and they hurt him, but he believed in Barça, and as a well-born person, he has always been a person grateful to the club that welcomed him in very difficult moments. In these years, some have tried to take advantage of him and in a shameful way they have succeeded.

They hurt him but he got over it

. Since we signed him in 2000, I have been following him closely and consider myself lucky.

I have also felt loved and respected by the family

and I have tried to reciprocate and that is how it will always be, especially when he ceases to be the best ever.

I know now some

and yes it’s true but

if he had wanted, if he had been a mercenary like many others

I would be much more so, although I am sure I would not have been so happy. This shows your intelligence. Also, son,

Leo has made Barça much bigger and yes, Barça has also made him the best player in history

, Without any type of doubts.

Whatever they say, the numbers don’t lie

. This is how things should work, they call that win-win. Thanks to him, many teammates shone much more and the club became the best in the world, the most admired and also loved. And when I say dear, I mean it knowingly because Leo despite being a genius, being the best, has always shown a humility and respect for others that few have imitated. Children from all over the world admire him not only for his football, but also for his sportsmanship and camaraderie with his colleagues and with rivals. And for their solidarity with the underprivileged, but always with discretion.

Leo is a normal guy

. He decided to believe

he insisted on playing for Barça and being the best

and also with Argentina, where they did not treat him as he deserved. But he believed and now, winning the Copa América against Neymar’s Brazil and in Maracana, they already love him a little more. I am happy for him and for his family, who have suffered it in their flesh. But

Leo and his people are still normal people, trusting and in good faith

, in a current world that is full of opportunists, interested people who flatter you when you are up to take advantage and if one day you fall, they forget and go after others. And Leo has sometimes believed in the wrong people who have lied to him.

But from these lines, Leo, starting with Álex and the entire Masfurroll family, we want to express our love and friendship to you. And we only ask one thing:

. This makes you different and better, not only as a player, but also as a person.

Here in Barcelona you have and will have “friends forever”

especially in difficult times, which is when they are needed. We say around here that institutions are more important than people. I am not so clear about it, because institutions, good institutions, are made by good people and when they fall into the wrong hands, they also disappear. Now a cycle does not end,

, but it doesn’t end the way it should. We are like this … and it makes me very sad. There are many of us who are still in a state of shock but not because you are retiring, but because you are leaving and in the terrible way everything has ended. Someday things will change and this nineteenth-century governance system that governs Barça will disappear and will be managed professionally, not in a political and populist style.

Does anyone really believe that the member is the owner of the club?

We are associates and not shareholders, let it be clear. And that a meeting of 700/800 delegates chosen at random can endorse the management of a Board? Renewed or die! It is time to be bold, courageous and innovative and adapt the outdated bylaws of a club that if you do not want to return to the desert crossing, you should do so now. But I’m afraid that as in politics,

the chairs of the board are very seductive

. “Fill, estic sad, com tants culers but also with tants soccer players and” messistes “. I know that there a on vagi Leo, nosaltres hi serem de cor. Ens has donated 21 years of felicitat, art, genialitats and ens has taught to play to futbol amb respecte, sense to renounce to l’ambició de guanyar “. Thank you from the heart Leo and family for the happy moments you have given us.