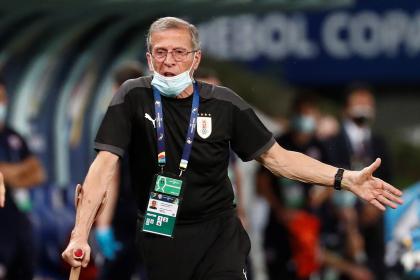 A new compromise between Uruguay vs Colombia is approaching, corresponding to the date of Playoffs road to Qatar 2022. The challenge for both teams will be to find points that bring them closer and closer to the dream of being in the World Cup. The celestial is known for her good game, despite having reluctant players with strong input. Oscar Washington Tabárez It endowed a winning generation with an identity, including the new ones who are joining, as a result of the generational change.

Since assuming the role as Uruguayan coach in 2006, he has achieved great performances, a Copa América and a third place in the 2010 World Cup are the record of a coach who has taken the reins and established his touch in recent years.

In the 15 years that he has been in command, he has faced Colombia six times, counting Montevideo, Bogotá and Barranquilla as the venues for the commitments. Balance in favor of the celeste, under the command of Tabárez, since he has achieved four triumphs, two on the road, two at home. A draw and a victory in favor of the tricolor.

The first corresponds to September 2008, when both teams met at the El Campín stadium. A goal from Sebastián Eguren allowed the Charrúas to take the triumph of Bogotá. A year later, the tricolor visited Montevideo and took three goals, repeating Eguren, the others were from Scotti and Luis Suárez, the discount was from Jackson Martínez.

The Qualifiers to Brazil were revenge for Colombia, as they beat Uruguay 4 to 0, with annotations by Falcao, Gutiérrez with a double and Zuñiga, in September 2012. Same month but in 2013, those of Tabárez won 2 to 0, with so many of Stuani and Cavani, on the final minutes of the match.

On the road to Rusisa 2018, tofo began in Montevideo, where the Charrúa beat the tricolor, Godín, Rolán and Hernández, 3-0, the authors of the celestial victory. In October 2016 both teams equaled two goals, with that remembered goal by Yerry Mina, at the end of the game.

The most recent duel was the remembered 0 to 3 in the Metropolitano, with goals from Cavani, Suárez, and Núñez. Balance in favor of Tabárez against Colombia, on the way to Qatar, which they must revalidate against a Colombia that is on the rise, learning and having the concepts of Reinaldo Rueda.