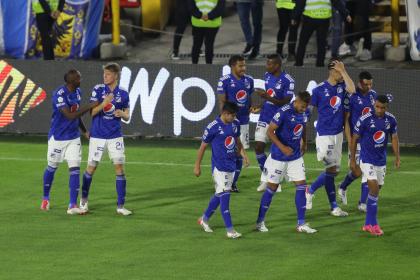 Emelec from Ecuador and Millonarios from Colombia face each other again, after several years of absence, this time it will be in a friendly game where the Ecuadorian team presented the squad in front of their fans on the night called ‘Blue Explosion’. Follow all the incidents of the game here, LIVE, do not miss this great game.

90′ The game ends with victory for Emelec

59 & # 39; Shot by Jader Valencia that passed very close to the Emelec goal

57 & # 39; Quiñones shot that comes out very soft and the Emelec goalkeeper saves

45′ Start the second half

45′ The first half between Emelec and Millonarios ends, with a partial victory for the Ecuadorian team

0′ Start the match between Emelec vs Millonarios

The game in Guayaquil has been moved 30 minutes and will now be played at 8:30 pm, it will be broadcast by Star +.

This is how our team will form in the Blue Explosion against Emelec. Ⓜ️⚽️🔝 LET’S GO MILLIONAIRES! pic.twitter.com/2niradcp4r