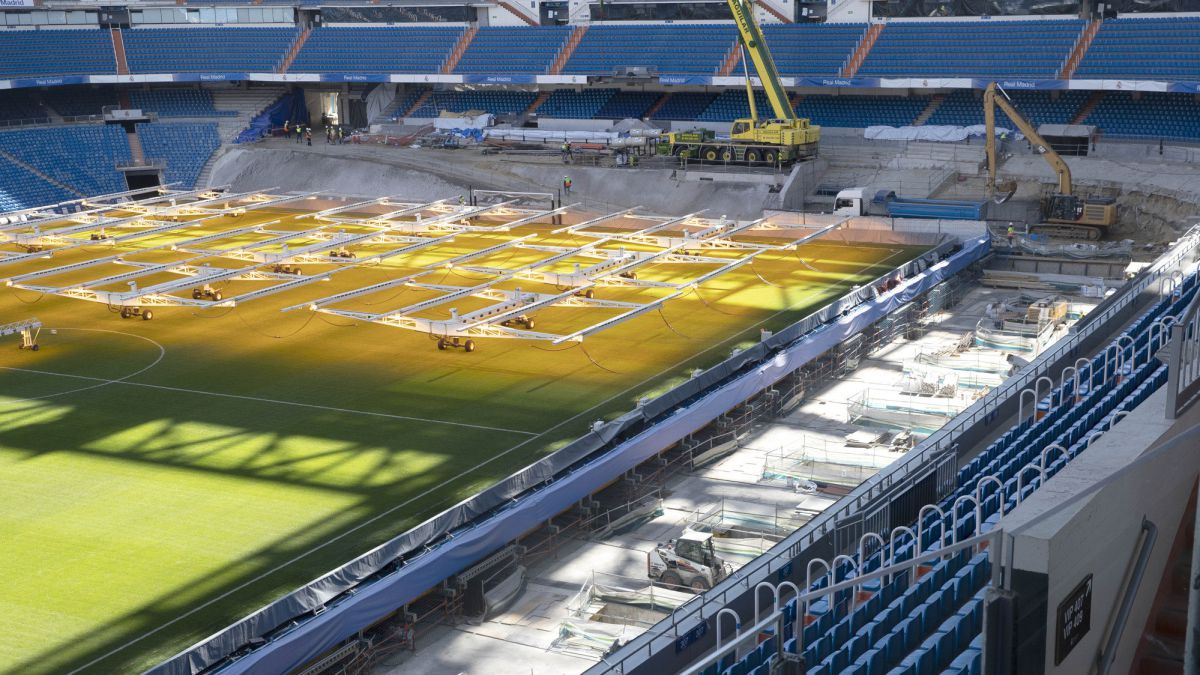 Madrid is moving all its logistics machinery to ensure that on March 9 the outstanding leader of LaLiga has all the elements, football and external, that will help him add more inputs in his attempt to come back before PSG the dangerous 1-0 harvested in the first leg of Paris last Tuesday.

Ancelotti takes care of the first. But the second is very above the club, which has studied with the architects, engineers and the Bernabéu construction managers the availability to expand the capacity of the La Castellana stadium in a more than considerable number. As AS learned, the objective of the entity is to be able to reach a capacity between 62,000 and 65,000 spectators on the night of 9-Mwhich would increase the one it has right now by a minimum of 10,000 seats.

As is known, the part most conditioned by the works is that of the lower standsboth the South Fund and the sides, especially the side that overlooks Paseo de La Castellana, the so-called Grada de Preferencia. Said side has been smoothed in recent days, while all the heavy machinery has been removed. This allows us to think that all those stands will be ready for 9-M, which will help Ancelotti’s men a lot in their goal of achieving the comeback they dreamed of against PSG given that those locations are the closest to the pitch and the players complained that until now the breath reached them from the First Amphitheater upwards, so the intimidating effect of the fans is lost a lot.

The problem of this studied expansion of capacity is not the relocation of Eurosubscribers who at the time were displaced from that part of the stadium due to force majeure (they are already relocated to other areas until the end of the season), but ensure a correct and safe evacuation of fans. Do not forget that in all that part is where it has deepened underground up to 30 meterswithin this avant-garde and unprecedented architectural work that will allow Real Madrid to have a retractable lawn that will be cared for in the stadium’s catacombs as if it were outdoors.

So, if everything goes according to plan, Madrid will begin to feed the spirit of the comeback against the powerful PSG with a significant increase in fanswhich will ensure a more noisy and unconditional encouragement from the Madridistas on a date in which Ancelotti’s men will need a climate like that of the great European nights to engulf the goal scored by the coveted Mbappé in the discount of the Parque de los princes.

What’s more, Those 10,000 more fans that the Bernabéu will win for that match will mean a significant increase in income for the entity. 9-M is approaching and the optimism of Real Madrid too. And if it is with more people supporting the stands of the Coliseum of La Castellana, all the better. It will be a boiler.

The Clásico on March 20 is also being considered

Although the increase in capacity is taken for granted with an eye on the transcendental match against PSG at the Bernabéu, It should not be forgotten that eleven days later (March 20) the long-awaited League Classic will be played at the White Coliseum.

It is true that the azulgrana are already out of the fight for the title, but the Madrid fans always record the day of the azulgrana’s visit in red, since it is still, despite the 15-point disadvantage of Xavi’s team, the rival to which the meringues have more desire.

On 20-M the first Clasico will be played against Barça at the Bernabéu since the two met on March 1, 2020 at the Bernabéu, with a full house and only two weeks after the confinement of all of Spain. Madrid won easily (2-0).