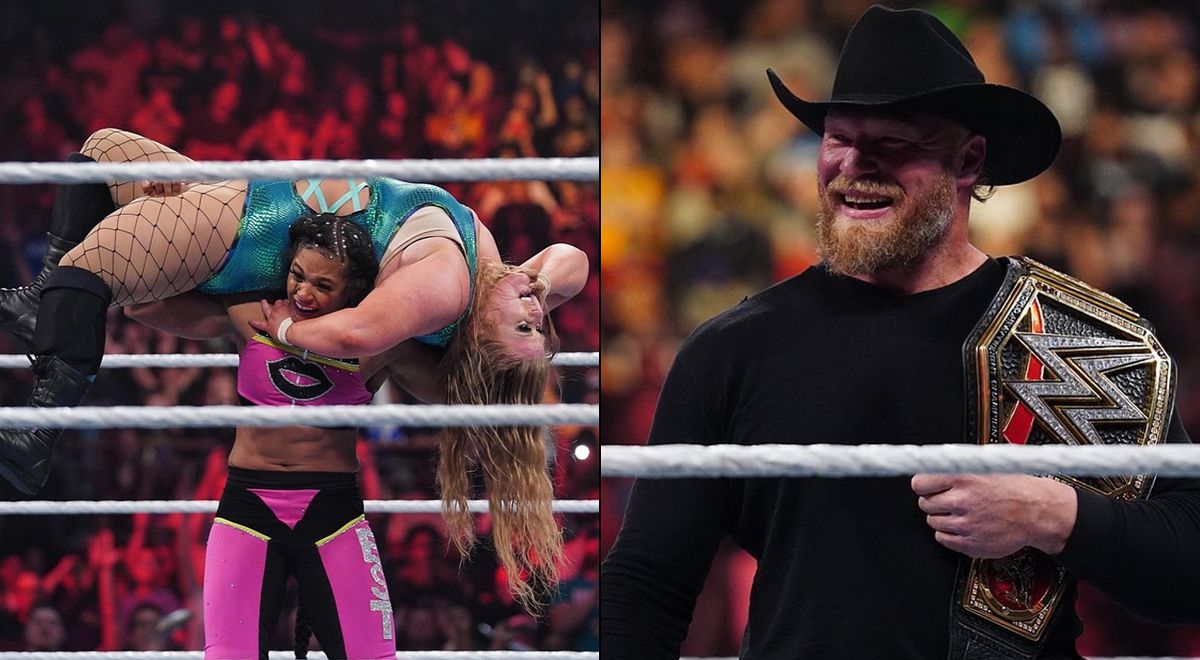 WWE carried out a new chapter of Monday Night Rawthe first after last Saturday’s event, Elimination Chamber 2022. Brock Lesnar opened the show with the world championship on his shoulder and celebrated with the public that surrendered to him.

However, he was interrupted by Paul Heyman, who revealed that He could not reach his duel with Roman Reigns as champion at WrestleMania 38because on March 5 he will face Bobby Lashley at Madison Square Garden and the world belt will be at stake.

Becky Lynch and Bianca Belair had a spicy confrontation in the ring because of their next meeting in the Showcase of the Immortals for the women’s title of the red mark. However, Doudrop interrupted them and faced The EST, who showed off her privileged strength and came out the winner.

YOU CAN SEE: Lita returns to the top with a dream match against Becky Lynch

Edge He made a recount of his participation in the Wrestlemania in which he was and stressed that this is his ‘Super Bowl’, and that he wants to be in this year’s edition. So, he sent an open challenge to any of the fighters in the locker room. This call could be taken by AJ Styles.

Finally, WWE RAW closed with the brutal confrontation between RK-Bro against Seth Rollins and Kevin Owens. This last duo took the victory and earned the opportunity to challenge the defending champions in pairs. So these two teams along with Alpha Academy will face each other in two weeks.

KO sent Orton out of the ring and Rollins applies his Stomp to the Viper.

Riddle escapes attacks from KO and Seth, and switches with Orton, who comes in and knocks them both out.

Riddle has an energy discharge and attacks Rollins with five moves in a row, but the count reaches two.

Orton attacks KO at the announce table and Rollins appears and lunges at him.

Rollins damages Riddle with his agility, but the latter responds with his strength and switches with Orton.

Bianca attacks Doudrop with a Spine Break followed by a Moonsault.

Belair sends Doudropa out of the ring with some kicks and then crossbody him.

Belair controls the fight against a Doudrop who manages to respond with her physical bulk.

Bianca Belair is measured with Doudrop.

Bianca Belair is very happy with her victory in the Elimination Chamber and because she will have a chance against Becky Lynch for the Raw women’s title.

Let’s hear it for the five other competitors in the Women’s Elimination Chamber Match at #WWEChamber!@BiancaBelairWWE claps for her tough opponents and shows appreciation.#WWERaw pic.twitter.com/CFRJSEFzi2

He held back the archer of infamy!

Priest finishes off Benjamin with his Reckoning.

Benjamin dominates Priest in the ring, but Damian doesn’t give up and manages to respond with a super kick.

Fight for the United States title

Video tribute to The Undertaker

The Miz comes out on stage and talks about his defeat in WWE Elimination Chamber 2022.

Ciampa deals a Knee Strike to Ziggler, but Roode intervenes on Dolph’s behalf and Balor appears to attack Bobby.

Ciampa starts the fight, but is cornered by Ziggler, who manages to make a Lasso.

Ford attacks Otis, but he falls on the Profits.

The Street Profits meet Alpha Academy in an unofficial duel for the tag team titles.

WWE begins the new chapter of Monday Night Raw with images of the Elimination Chamber 2022, held this last Saturday in Saudi Arabia.

Lesnar is scheduled for tonight and will surely celebrate his new reign and taunt the Dominator. But, he will also rule on the Tribal Chief. However, Lashley’s presence is also confirmed, so there could be a confrontation or cross between the two colossi.

YOU CAN SEE: Lita returns to the top with a dream match against Becky Lynch

Becky Lynch will also be present this Monday and will have a one-on-one with Bianca Belairyour next opponent. Both will face each other at WrestleMania 38 for the RAW women’s championship. The EST seized this opportunity by winning the match in the Elimination Chamber; while The Man beat the mythical Lita.

Another who will appear today will be Damian Priest, who retained the United States title against AJ Styles, but perhaps another opponent will come out. Seth Rollins is also scheduled for this new episode of the red mark and it is not known what his next step is, or face Lesnar or go for Priest.

The place where the WWE Monday Night RAW It is at the Colonial Life Arena in Columbia, South Carolina, United States.