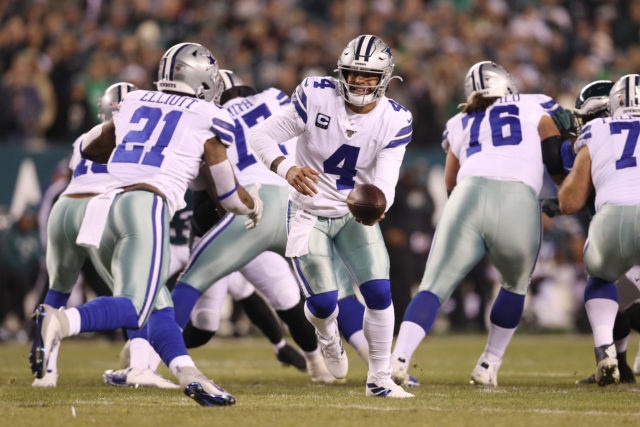 It’s just under a week before the start of the new league year in the NFL, and with it, free agency. Because of this, all 32 teams are beginning to make moves ahead of the upcoming campaign. In the case of the Cowboys, there are many open fronts between the salary cap and the continuity of those who expire next week. However, Dallas already made its first moves on Tuesday.

One of the first served to lighten their financial situation for this year. The team announced the restructuring of the contracts of quarterback Dak Prescott and guard Zack Martin, turning both players’ salaries for this year into signing bonuses. With these transactions, Dallas freed up about 15 and 7 million dollars, respectively.

With this $22 million, the Cowboys’ salary-cap situation improved considerably. According to data from Over The Cap as of Wednesday morning, Dallas is $769,684 over the salary cap. And this was expected, since the Prescott and Martin restructurings were the easiest on paper.

Cowboys confirmed these restructurings are complete. Contracts for QB Dak Prescott (about $15 million) and RG Zack Martin (about $7 million) created more than $22M in cap space for 2022 league year. Money pushed into a future when NFL’s salary cap is expected to continue rise. https://t.co/B3EGXwEOKy

Another expected move Dallas executed Tuesday involves Dalton Schultz. On Tuesday, the team designated the tight end with the franchise tag for 2022 worth $10.9 million. With this, Schultz’s continuity for this year is assured.

It is worth mentioning that this franchise tag gives both parties more time to agree on a long-term contract, with July 15 as the deadline. If Dallas decides to extend Schultz, it would allow for “more friendly” figures regarding the salary cap for this year. However, we will have to wait a while to know the final decision of the team in this regard.

The Cowboys will place the franchise tag on TE Dalton Schultz Tuesday afternoon. Both sides have until July 15 to work out a long-term deal or Schultz will play the 2022 season on the tag ($10.9 million). https://t.co/kqgzZxdgqK

Finally, the Cowboys secured the continuity of one of their receivers. This is Noah Brown, who received a one-year contract extension on Tuesday. Recall that Brown was one of 21 Dallas players set to become an unrestricted free agent next Wednesday.

With this extension, the Cowboys will keep a depth piece in their receiving corps. This, at least, while they continue to negotiate the extensions of Michael Gallup and Cedrick Wilson. And, of course, without forgetting that the future of Amari Cooper is still in doubt, this due to the savings that his departure would mean regarding this year’s salary cap.

the #DallasCowboys sign Noah Brown to a one-year extension through the 2022 season.

More movements are expected in the coming days

With March 15 drawing ever closer, more moves from the Cowboys’ front office are expected. Of course, the biggest priority right now is freeing up cap space. And this is something they can achieve by making adjustments to the contracts of their highest-paid players. However, this will not be easy.

Such is the case of Amari Cooper, whose departure would free up $16 million over the salary cap, although restructuring his contract would not be ruled out. In addition, the Cowboys could also modify the contracts of Ezekiel Elliott, Tyron Smith and La’el Collins. However, this would take away from the team the option of cutting them anytime soon, which is feasible given the physical and performance issues they’ve had.

Special mention deserves the situation of DeMarcus Lawrence. The defensive end’s departure would free up about $19 million under the salary cap, but that’s only if it’s executed after June 1. However, Dallas could also restructure Lawrence’s contract as an alternative to improve his financial situation. A salary reduction was among the possible options, but reports indicate that “Tank” refused this proposal.

But that is not all. The Cowboys still have 19 players whose contracts expire next week, which means they have to work through multiple contract extensions. The main candidates for extensions are wide receivers Michael Gallup and Cedrick Wilson, as well as defensive end Randy Gregory. Others, however, may end up discarded due to the cost they may have this year.

Such is the case with punter Bryan Anger. According to reports this Tuesday, it is very likely that the Cowboys will decide not to extend his contract. Anger, who signed with Dallas in 2021 for just over $1 million, put in a performance that earned him a Pro Bowl selection. Therefore, it is very likely that the market value of the pointer rise up. And that’s something the Cowboys couldn’t afford right now.

Cowboys punter Bryan Anger is considered unlikely to return to Dallas after his franchise-record 44.6 net average in 2021, sources said. I have signed a minimum $1,075M contract last year and made first career Pro Bowl. With his market on rise, team likely going value shopping again.

As reported by Michael Gehlken of the Dallas Morning News on Wednesday, the Cowboys will not execute the unrestricted free agent offer on Gifford. If applied, it would mean a $2.4 million impact against the salary cap. However, the cowboy team is interested in re-signing Gifford. This, of course, through a “friendlier” agreement in financial terms.

Cowboys have notified LB Luke Gifford’s agent, Brett Tessler, they won’t be tendering Gifford as a restricted free agent. But they are interested in re-signing him to a more cap-friendly deal. “So we’ll see what happens.” https://t.co/C53uQ1q7Wu

For now, we will be waiting for the next moves and transactions made by the Cowboys before the start of the new league year and free agency. Special attention deserves the situation of Amari Cooper, whose departure would have to occur before March 20, the day on which her 2022 salary would be guaranteed. Either way, the next few days promise to be hectic in the offices of the cowboy team.

The Cowboys have already made their first moves for the season