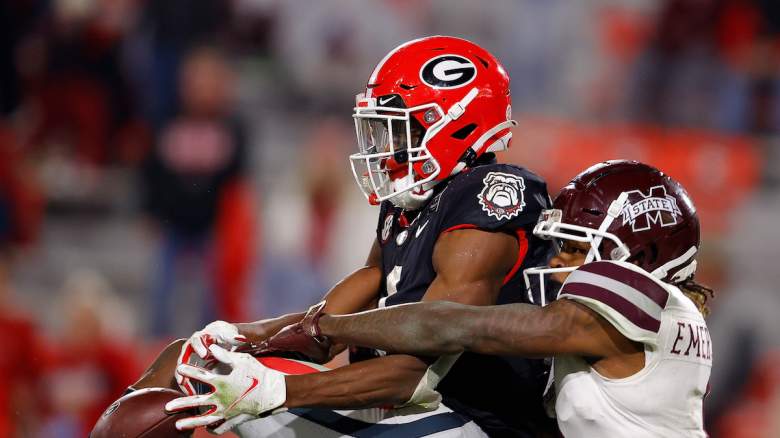 Unless something drastically changes in free agency over the next two weeks, the Indianapolis Colts will enter the 2022 NFL Draft without much depth at wide receiver. But the beautiful thing about the draft is that everything can change in a single day or even a selection.

Colts insider Andrew Moore of Sports Illustrated predicts that could be the case in the Indianapolis wide receiver room. Moore projects the Colts will select two wide receivers, George Pickens from Georgia and Danny Gray from SMU, with two of their first three picks in the 2022 NFL Draft.

“George Pickens would be a perfect fit on a Colts team in desperate need of weapons,” Moore wrote in his Colts-focused mock draft. “At 6’3” and 195 pounds with a 77-inch wingspan, Pickens is a big-bodied wide receiver with an incredible catch radius and can run up and catch any ball. While his 4.47 40-yard dash doesn’t show great speed, he plays much faster and ran away from the SEC competition.

Moore was similarly high on the Colts’ potential by drafting Gray at No. 122 overall.

“The Colts decide to do a double dip at wide receiver when they nab speedster Danny Gray in the fourth round,” Moore wrote.

Does George pick up a steal in the second round?

NFL Draft analyst Todd McShay of ESPN hinted that Pickens might have been a first-round prospect had he not torn his ACL in spring practice last year. He missed most of the season, returning in late November to catch five passes for 107 yards.

But Pickens remains a possible second-round option because of his college career before his surgery. In his first two seasons he recorded 85 receptions for 1,240 yards and 14 touchdowns.

Pickens also performed well at the NFL Combine and Georgia pro day to confirm that he has recovered from his injury.

Moore argued that the Colts shouldn’t have any debate over whether or not to draft Pickens if he’s available at No. 42 when Indianapolis makes its first pick.

Pickens would be a great compliment to [Michael] Pittman on the opposite end, giving the Colts two legitimate threats at wide receiver,” Moore wrote. “If Pickens is available at 42, the Colts should hand over the card right away.”

Pittman broke out, posting his first 1,000-yard campaign last season. But Indianapolis’s next two top receivers as of 2021, Zach Pascal and TY Hilton, are no longer on the list. Pascal signed with the Philadelphia Eagles in free agency and Hilton remains unsigned.

If the Colts select two wide receivers with their first picks in the 2022 NFL Draft, they will have to be wide receivers with different skill sets. Moore argued that this is why Gray is such an intriguing prospect for Indianapolis in the fourth round.

“Gray is a threat to take the top off the defense on every play,” Moore wrote. “His speed and explosion of him would threaten NFL defenses and allow him to work the job as a rookie. While he is still a raw prospect, he could work to expand his game while also having a role in the offense.”

Gray ran a 4.33-second 40-yard dash at the NFL Combine, which was the fourth-fastest time among wide receivers.

Pickens finished the 40-yard rush at the combine in 4.47 seconds, but McShay wrote that his strong point is getting away from media coverage and tracking the ball deep.

With Pickens and Gray, the Colts could turn the wide receiver into an offensive force.

At a minimum, drafting Pickens and Gray would give Indianapolis plenty of young talent at wide receiver. Both receivers are under 24, and Pittman won’t turn 25 until October.