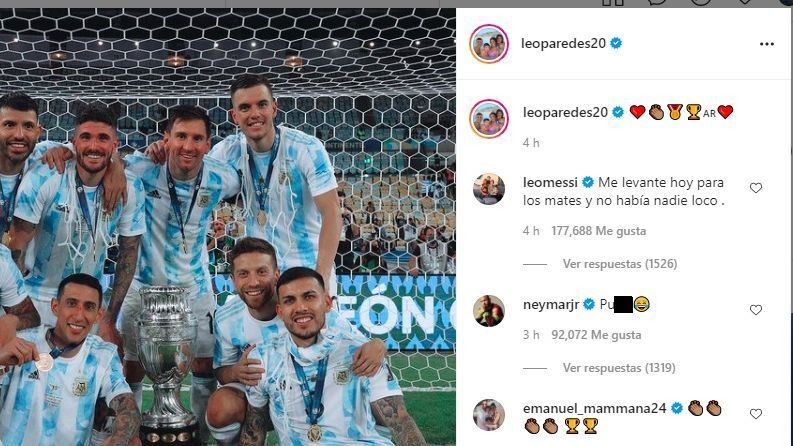 Leandro Paredes uploaded to your account Instagram a photo with some of his teammates from the Argentine National Team and the Copa América. This publication triggered a series of comments from members of the albiceleste, such as Lionel messi, but surprised the response of Neymar, his partner at Paris Saint-Germain, who wrote “Pu …” with some laughing emojis.

Paredes published a photo in one of the Maracana’s goals together with Lionel Messi, Angel Di Maria, Sergio Aguero, ‘Papu’ Gomez, Nicolas Otamendi, Rodrigo de Paul Y Giovani lo celso. One of the comments to the image, in which the Copa América was located in the center, was from Neymar, who put the word “Pu …”.

Another of the outstanding answers was that of Messi. “I got up today for the dunks and there was no one crazy,” wrote the captain of the Argentine team. Paredes replied to ’10’: “Send the room number and let’s go.”

De Paul, Atlético de Madrid’s new player, limited himself to saying “I miss you”. While ‘Papu’ Gómez and former player Ezequiel Lavezzi joined the publication with emojis to celebrate the albiceleste championship in the Copa América.

It should be remembered that Neymar came over to congratulate Messi while the Argentines celebrated the championship and even a photo of both footballers sitting in the Maracana tunnel was leaked, a property that once again brought together the players who triumphed at Barcelona.

Neymar’s congratulations to Messi reached social networks, where the Brazilian expressed that he hated losing, but that he was happy for the championship that his friend had achieved.

“My friend and brother MESSI. This guy is amazing. I have great respect for what he has done for football and especially for me. I HATE TO LOSE! But enjoy your title. Soccer was waiting for you for this moment! ”.

The Mexican National Team has currently received sanctions from FIFA because it is considered a homophobic term and they have even received multiple sanctions for the behavior of their fans in the stadium.