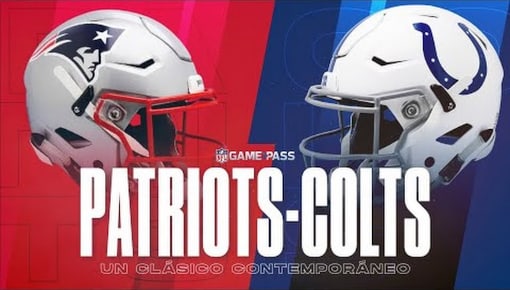 On Saturday night, the New england patriots will take their seven-game winning streak to Circle City to face off against the Indianapolis Colts looking for the playoffs at Lucas Oil Stadium.

The Patriots (9-4) have become the best team in the AFC after starting the season at just 2-4. When it comes to size and physique, New england It could be the best team in the country. Two weeks ago, they absolutely imposed their will on the road against Buffalo, running the ball 46 times and throwing the fewest passes in a league game. NFL since 1974 with three, beating the Bills 14-10 in wildly stormy conditions. Now, fresh from their week off, the Patriots They are looking to keep their train running toward an eighth straight win and another impressive road win.

The Colts (7-6) are also coming off a bye week and now find themselves with a playoff spot (sixth seed). Two weeks ago, they did exactly what they needed against the Texans, dismantling Houston on the road, 31-0. Indy he has won four of his last five ball games and six of his last eight to help him overcome that terrible 0-3 start to the year. A victory against New England Saturday night would further cement his position in the playoffs, but it would also wreak havoc on the rest of the postseason image.

Time and Channel Colts vs Patriots

1.- Pats D vs JT28 race
The defensive of New england has the largest front seven and possibly the most physically imposing of all the NFL. But his biggest advantage is his ability to adapt to each opponent, as the head coach Bill belichick he changes his defensive schemes from week to week. So far this season, this defensive unit of the Patriots has been as dynamic as any defense of New england from his first Super Bowl races to Belichick with guys like Willie McGinest, Mike Vrabel, Ty Law and Tedy Bruschi.

This version of the Patriots D it is the tightest unit in the league with 15.4 points allowed per game. In their last five victories, they have been a pure force, limiting teams to just 7.2 points per game, never allowing more than 20 points. They have been exceptional against the run, keeping opposing offenses to less than 100 yards on the ground in five of their last seven games.

But the Patriots they have yet to face a running game as dangerous and tenacious as the Colts’ running game. Indy is the best in the league at hitting the stone, ranking first in yards per carry (5.1) and second in rushing yards per game (151).

Jonathan Taylor he is the best runner in the NFL right now, without exception, leading the league with 1,348 yards and 16 rushing touchdowns. Like the defense of the Pats, Taylor does not have a distinct style of play. He can wear down a defense over the course of a game with power runs between tackles, with enough dexterity to dodge linebackers in tight spaces, and breakaway speed to bring one home from over 40 yards. He leads the league in evaded tackles, yards created, speed of juke, rushing yards above expectations, rushing yards before and after contact, and explosive runs.

It is amazing that the head coach Frank Reich It took him 10 games before giving Taylor more than 20 carries in a game. Since then, the only 20th carry game Taylor had had was against Tampa Bay, a loss for the Colts. Taylor was still able to score the Bucs for 5.1 yards per carry and a touchdown despite having only 16 carries. No wonder the Colts are 7-0 when Taylor reaches the 100-yard mark this season. The man is a monster.

I would expect a strong dose of Taylor this week against the Pats. Even though their ground defense has been so tough of late, New england had a setback recently against an offensive line similar to that of the Colts when they allowed the Titans to push 270 yards rushing down their throat with D’Onta Foreman and Dontrell. Hilliard (who?) Running the ball.

Watching these two huge front lines push and shove each other could be the biggest factor in this game. With the center Ryan kelly back in the lineup this week for Indy, and the great Quenton Nelson to his immediate left, must like the opportunities of the Colts with Taylor in the backfield.

2.- Be careful what you want: Mac Jones edition
There is no question about it, just like the Colts, the offensive of the Patriots relies on his ground power game. The Pats they have nine straight games of gaining at least 100 yards rushing and rushing the ball on 49.1 percent of their offensive plays, the sixth-highest mark in the league. Running backs Damien Harris (754 yards, 4.6 ypc) and Rhamondre Stevenson (429, 4.3) have put together a formidable one-two shot, and the Pats’ O line is as tough as it sounds. New England will be without Harris on Saturday due to a hamstring injury, so Stevenson will take on a bigger role and Brandon bolden you will also get some touches.

I totally hope that Colts Be aggressive in your attempts to stop the Pats’ running game. Look for the defensive coordinator Matt eberflus to stack the box with his linebackers and score blitzes all night long. The Colts They probably trust their dynamic defensive backs in man-to-man coverage enough to bombard more than usual against Jones. He’s pretty average against the blitz, ranking 17th in yards per attempt (6.9) and rating (86.1) against pressure.

By attacking Jones, the Colts they will hope to prevent him from shooting to the sidelines, where he is most dangerous, and more towards the middle of the field where he almost never shoots. Jones He only has five complete passes between hashes since week 6.

And therein lies the blow to Jones. He’s too sure. It is just a game manager. He is 23rd in passing yards completed (5.3) and expected passing yards (7.6), 22nd in deep shots (43) and 20th in danger shots. He does not run many opportunities with football.

But sure doesn’t mean bad. In the case of Patriots, it’s about balance. In fact, the airstrike of the PatriotsJones, especially, has been really good during this seven-game win streak. During this run, Jones is completing 69.4 percent of his shots, with a 106.1 rating and a 9-2 touchdown-to-interception ratio. The eight sets of Jones with a completion rate of at least 70 percent are the most in the NFL this year. And his numbers in play-action passing situations are roughly eight points better across the board than they are on standard shots.

So while your numbers may not be Rodgers or Brady’s (yet), Jones He has shown that he is a vital part of this Patriots offense and the success of the team as a whole. Give it a try if you dare, Indy.

3.- Protect the ball, win the game
As has been said many times, success in NFL it comes down to who is the healthiest, who protects the ball and who takes it. That equation is our rock and a hard place for Saturday night.

The Colts and the Patriots They’re the top two teams in the league when it comes to forcing turnovers, ranking first and second in defensive loss percentage, respectively. The Colts They lead the league in forced turnovers with 29, including 14 fumbles recovered. New England’s defense is third with 26 earned turnovers and second with 19 interceptions. In each of their last three games, the Patriots they have forced nine points and the Colts eight. All seven interceptions by New England cornerback JC Jackson and all five forced fumbles by Indy linebacker Darius leonard rank second in their respective categories in the NFL this season.

On the other hand, both teams are very good at protecting football, especially their quarterbacks. Despite some game-challenging interceptions earlier in the year, Carson Wentz is still having the best year of his career protecting football. In the past five games, Wentz has only three turnovers, two of which were interceptions (not his fault) against Tampa Bay. Jones guards the ball like an experienced vet. He has only given away the ball three times in the Pats’ seven-game streak with just eight picks this year.

In short, the team that best protects the ball will win. If the game turns into a turnover festival, I think that would help Indy and his offense’s ability to attack with the big play.

This game is extremely even and with two very balanced teams. For me, it’s all about training styles. Reich He’s aggressive and bold, but he strays from his bread and butter at times. Yes OK Belichick He always sticks to the plan, even if it means only throwing three passes in a game. Yes Reich gives to Taylor at least 25 carries, I like the chances of the Colts at home. But I also learned never to discount a team trained by Belichick.