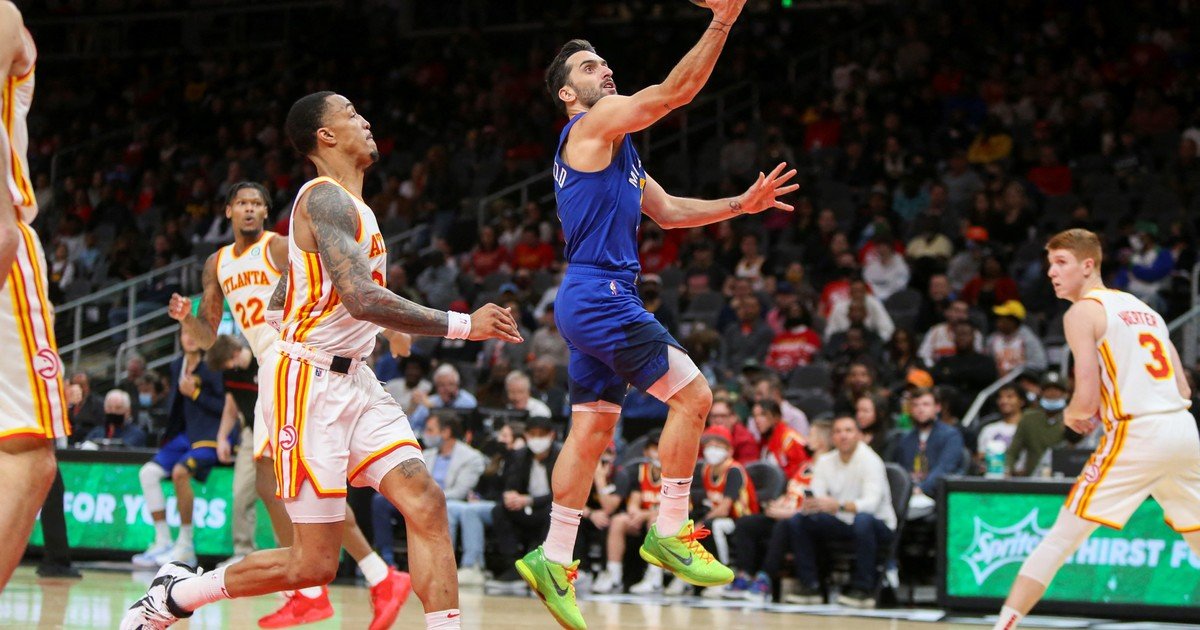 Another great great match from Facundo Campazzo to ratify his lift. For the third time in the last four games (and in just one week), the Cordovan contributed eight assists for his Denver Nuggets, who this time collaborated in the victory against the Hawks in Atlanta by 133-115. In just 19’39 ”, in addition, the point guard of the National Team converted seven points (2-3 in doubles, 1-2 in triples), three defensive rebounds, three steals, one loss and two fouls. Complete …

The Hawks were unable to respond to the Nuggets’ offensive and defensive team play and lost 133-115 at home despite Atlanta guard Trae Young reaching his 100th career double-double with 34. points and 10 assists. Young, who was the leading scorer of the game, also had three rebounds and two steals.

But the effort of the Hawks point guard was insufficient to compensate for the performance of the Nuggets, who had Bones Hyland as their leading scorer from the bench with 24 points, four rebounds, two assists and two blocks. Center Nikola Jokic, meanwhile, got a new double-double with 20 points, ten rebounds, seven assists and three steals.

After the game, Nuggets coach Michael Malone praised Facu’s performance, calling it “outstanding.”. For the second consecutive night, Campazzo’s entry to the court boosted the Nuggets’ attacking game and provided Denver’s takeoff on the scoreboard in the second quarter.. The Nuggets bench contributed 51 points while the Atlanta bench settled for 34.

From the beginning, the situation looked bad for the Hawks. Jokic opened the scoring within seconds of winning the opening jump with the first and only triple he scored in the entire game. The Serbian player, another year one of the main candidates for the MVP award, was the central axis of the team, capturing rebounds, giving assists and stealing balls.

Up front, the Hawks were not working either on offense or defense, with a Young who had only made an appearance to lose a ball and commit a foul. With 3-12 on the scoreboard with 3 minutes to go, Hawks coach Nate McMillan was forced to request his first time out. The move paid off and with the resumption of the game, Young began to lead his team which allowed the Hawks to make a 16-5 run in four minutes and get ahead on the scoreboard 19-17. This time it was Malone’s turn to react. The Nuggets coach put Campazzo on track and the Cordoba player became the trigger that Denver’s team needed. With Facu on the court, the first quarter ended 29-26 for Denver thanks to a final triple by Campazzo.

Facu, from lowest to highest in the season.

The second quarter started with a steal and an assist from Campazzo and the Hawks trying to contain the renewed momentum of the Nuggets. The locals kept their faces during the first three minutes of the second quarter. But after reaching a point with 9 minutes remaining, 38-39, the Nuggets punished them with a 15-6 run that left the score at 54-44 with 5 minutes remaining in the second quarter . Those from Atlanta followed failures in defense and without ideas in attack and when it came to rest, the difference had widened to 18 points, 72-54.

The Hawks could no longer recover. In the third quarter, the Nuggets had no trouble keeping their distance even though their main player, Jokic, only played a little over a minute. The third quarter ended with 106-87 on the scoreboard and the match decided in favor of the visitors.

Eight assists from Campazzo, the same mark he repeated in three of the last four games.

In the last 12 minutes, Malone gave Jokic minutes again but the rest of the starters only played a little less than four minutes to give the rest of the bench a chance to stretch their legs against the out-of-tune Hawks.

Karl-Anthony Towns had 28 points and ten rebounds for that The Minnesota Timberwolves will defeat the exhausted Los Angeles Lakers 110-92 this Friday for the second time this season..

Malik Beasley and D’Angelo Russell each had 17 points and Jarred Vanderbilt grabbed a career-high 16 rebounds to help the Wolves win their third straight game. They played for the first time without star Anthony Edwards, who in the afternoon was placed under NBA health and safety protocols.

LeBron James had 18 points and 10 rebounds for the Lakers, who have been affected by COVID-19, with six players in the protocols (including Avery Bradley, Talen Horton-Tucker, Duwight Howard, and Malik Monk). Isaiah Thomas made his season debut with 19 points, Russell Westbrook had 14 points and Kent Bazemore equaled his season high with 11. Anthony Davis left the game twice with different injuries.

New win for the Wolves over the Lakers.

The Timberwolves, who beat the Lakers 107-83 in Los Angeles on November 12 without James in the lineup, held a 61-36 rebounding advantage. Davis hurt his right ankle late in the first period, came back in the second and then hurt his left knee in the third period. He didn’t come back from that. Davis, who missed two games last week with sore left knee, finished with nine points and a rebound in 20 minutes.

The Timberwolves did not give any option to the Lakers who were only in front of the scoreboard in the first two minutes of the game. Minnesota, which had a 26-point lead in the fourth quarter, he had Leandro Bolmaro on the court for 4’06 ”, where he lowered a defensive rebound and lost two balls.

Campazzo does not stop attending (and winning)