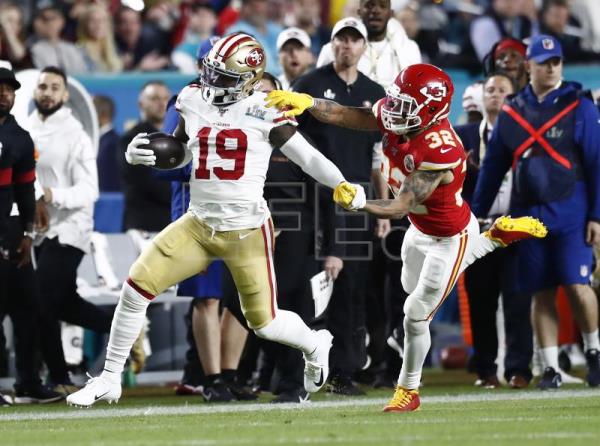 Receiver Deebo Samuel of the 49ers, guard Quenton Nelson of the Colts, and receiver Arthur Juan Brown are three of the most desired free agents among NFL teams as of Tuesday.

None of them have received a sign to renew in the teams with which they played in the 2021 season and if they do not receive it before the Draft on April 28, offers from the rest of the teams in the League will begin to arrive to attract them.

Deebo Samuel is the star of the San Francisco 49ers. Last season he had 1,405 receiving yards; he led the NFL with an average of 18.2 yards per catch and had eight rushing touchdowns.

The receiver came to the team in the second round of the 2019 Draft and is pressing for his rookie contract to suffer an improvement to the 1.9 million dollars he receives per season, something essential for the 2021 Pro Bowl selection to continue with the 49ers.

In four seasons, he has been a four-time Pro Bowl selection and is the lifeblood of coach Frank Reich’s team’s offensive line.

Nelson was vital in protecting passer Matt Ryan and fundamental in blocking, he has a 75.5 average on rushing plays which is the highest in the NFL, for the offensive production of running back Jonathan Taylor.

In a hectic offseason market, Arthur Juan Brown is still waiting for a contract extension to remain a star for the Titans, the team that drafted him three seasons ago.

Brown’s numbers have already awarded him a selection to the 2020 Pro Bowl for his 1,075 yards and 11 touchdowns, his best season in his short career in which he accumulated 2,995 yards and 25 touchdowns.

According to team coach Mike Vrabel, Brown will not leave Tennessee.

“That won’t happen, at least not while I’m the head coach. I enjoy watching him play, I know him well and I want to have him here,” he replied when asked about the imminent departure of his receiver.

In the most relevant free agency moves this Tuesday, the Chicago Bears reinforced their defense with the hiring of former Baltimore Ravens cornerback Tavon Toung and linebacker Matthew Adams, who in 2021 played for the Indianapolis Colts.

Deebo Samuel, Q. Nelson and AJ Brown, the most desired free agents in the NFL