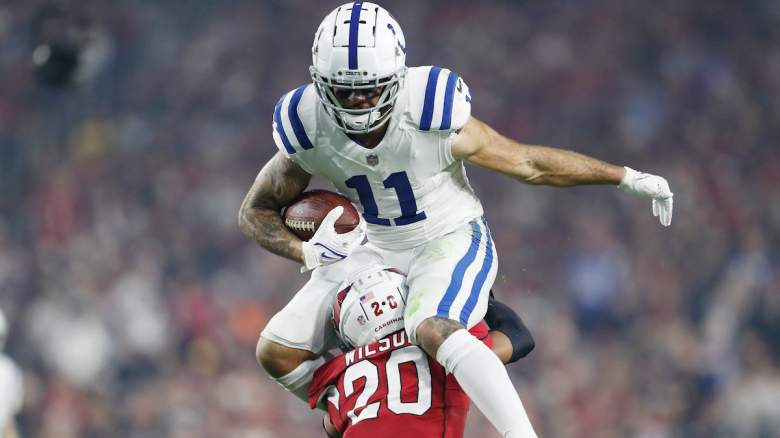 If there’s any consensus among the reporters and pundits covering the Indianapolis Colts this offseason, it’s that the team lacks depth and experience at wide receiver.

ESPN NFL analyst Dan Orlovsky decided to remind everyone of that fact on Twitter.

On April 19, Orlovsky was highly critical of the Colts’ wide receivers, citing the lack of previous NFL production the team has at the position.

*eagles have less but D smith is a young star

As shown above, Orlovsky responded to his own post by also tweeting that the Philadelphia Eagles do, in fact, have less production among their wide receivers, but that Devonta Smith is a young star.

With that second tweet, Orlovsky seems to be implying that Michael Pittman Jr. is not a young star. Interestingly, though, Pittman, Indianapolis’ leading receiver of the 2021 season, had more receptions and yards than Smith last year.

A Pittman versus Smith argument isn’t the only interesting debate Orlovsky is inadvertently starting on social media. ESPN’s analyst called Aston Dulin the Colts’ No. 2 wide receiver, but the team might actually see Parris Campbell as their current favorite to start against Pittman.

“I’m not giving up Parris Campbell,” Colts general manager Chris Ballard told The Athletic’s staff writer Zak Keefer in early March. “But does that mean we’re going to sit here and count on him to be our 2 or 3 right away? No. We will add competition to the position.”

Dulin will be part of that competition. The Colts announced on April 19 that he signed their restricted free agent offer.

Campbell has 34 receptions and 360 receiving yards in his three-year NFL career. His 34 career receptions is nearly double Dulin’s.

Last season, Campbell produced less than Dulin, but Campbell only played six games due to injuries. In fact, Campbell has yet to dress for more than seven contests in any of his three seasons due to various ailments.

Will the Colts target wide receivers in the 2022 NFL Draft?

Orlovsky may have incorrectly assumed that Dulin is Indianapolis’ No. 2 wide receiver as of April 20, but his original point about the Colts’ hole in the roster is true.

Outside of Pittman, Keke Coutee is the only other receiver signed in Indianapolis to have recorded a 400-yard receiving season in the NFL. Coutee is also the oldest wide receiver on the Colts’ roster at 25 years old.

If Indianapolis wanted to increase the average age of its wide receivers and increase the career statistics of the group, Ballard could re-sign TY Hilton or target a former teammate of Matt Ryan’s two-time All-Pro, Julio Jones.

On April 17, NFL writer Kristopher Knox of Bleacher Report wrote that five-time Pro Bowl wide receiver Jarvis Landry would be a better fit for the Colts.

But the Colts have been cautious about signing free agents. The much more likely scenario is that Indianapolis adds a wide receiver or two via the 2022 NFL Draft.

On April 5, ESPN NFL Draft analyst Todd McShay sent Pickens to the Colts in the second round of their mock draft. In the last mock of him posted on April 19, McShay had the Colts pick South Alabama wide receiver Jalen Tolbert 73rd overall.

The Colts have seven draft picks in the 2022 NFL Draft to add competition at wide receiver.