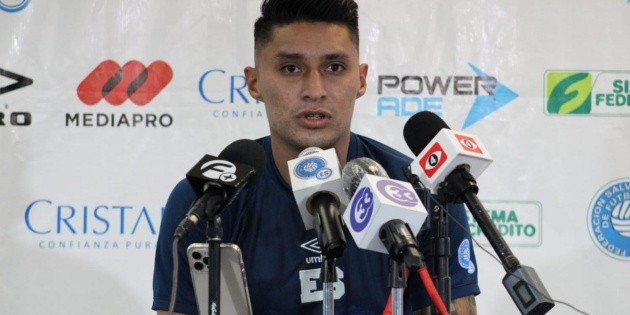 The defender of the national team and the Alliance, Bryan Tamacas, asked to speak in a conference to the media this Tuesday to give his version of his act of indiscipline that earned him a fine and not be called up for the match against Firpo on Sunday.


Bryan Tamacas: “I want to apologize to the Alianza fans”

Tamacas said he had a family situation and did not attend the pachyderm team practice last Thursday. He assured that he could not notify the coaching staff, commanded by Milton Meléndez and therefore the team applied the internal regulations.

“First I want to apologize to all the Alliance members for everything that has been generated. I do not want to get into more controversy and I wanted to do it this way that is by showing my face. I was indiscipline missing training on Saturday, I had a family problem and not I was able to notify in time, “said Tamacas.

“The club applied the regulations and I agreed. I am the first to realize my mistake and out of respect for my teammates who were in practice it was that I could not be on the field on Sunday. Tell the fans that I am more committed than ever, that they believe in this group that we want to get ahead, “he said.

Tamacas pointed out that this has complicated both him and his family in recent days “because of everything that has been said” and for this he wanted to give his version. Despite this, Hugo Pérez, national coach, keeps him in the group to face the friendly against Costa Rica this Saturday and the games of the octagonal against the United States, Honduras and Canada.

“Professor Hugo was the first to speak to me, he sat me down and asked me what had happened. Now I am focused on work and that this remains here because it has hurt me and my family as well,” he said.

“Already focused on the game against Costa Rica, we know that nothing has been gained but the work in the national team has been good. We want to continue with that good image,” he determined.

For his part, Hugo Pérez also spoke about the situation in Tamacas. He said he spoke with both the player and coach Meléndez to see all the versions. He has given him confidence but warned him that if evidence comes out in the next few days that Tamacas has not told the truth “he will be left out of the national team.”

“I spoke with the player and he told me what happened. Also with the coach to hear everything. The club applied a fine and the corresponding sanction to him. That happened in his team and I want to make it clear that the commitment of the player and the selection. If tomorrow or next week or another day comes evidence that what he said is not true, he is out of the selection. I made it clear to him first, “said Pérez.