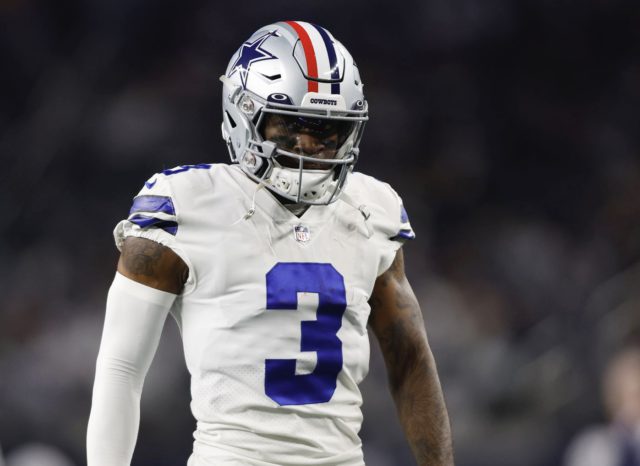 One of the details that cannot be avoided in NFL games is the possible injuries that players may have in the process. Unfortunately, this is something that cannot be predicted, and the Cowboys are no exception to the rule. As would cornerback Anthony Brown, who left the week 13 game against the Colts with extensive discomfort.

As could be seen during the broadcast, the defensive back had to go by car to the locker room with a towel over his head. All the indications suggested that the injury was serious and that it could affect his performance in the rest of the season. After the cowboy victory, it would be the same Jerry Jones who told the media that Brown ruptured his Achilles tendon. Therefore, his season is over and it has been a very hard blow to the team’s defense.

Anthony Brown (left ankle) had a towel over his head and his head down as the cart took him to the locker room pic.twitter.com/Ff3sW5K0V8

While it’s true that Anthony wasn’t having an exceptional season, his experience in the league gave him plenty of confidence on the opposite side of Trevon Diggs. As could be seen when Kelvin Joseph had to go out in place of Brown at the position. The boy who is already in his second year with the franchise has not finished convincing with his production and now they will have to evaluate a lot of things before this weekend’s clash against the Texans. And of course, everything else on the calendar, including that big game against the Eagles on December 24.

In addition, other options they can count on in the house are the aforementioned Nahshon Wright and DaRon Bland. However, the former has yet to see any defensive snaps in 2022. And even though he had some action in the preseason, it doesn’t seem wise to start him late in the regular season. Apart from this, Fassel will use it in the special teams as he already commented at a press conference. Likewise, DaRon Bland has come to have a great season as a rookie in the NFL. Only in the case of the latter, he is already filling the inside corner spot left behind by Jourdan Lewis after his Lisfranc injury in Week 7 against the Lions.

Therefore, the team might have the answer in its practice squad. Don’t forget veteran Kendall Sheffield, who was part of the Falcons from 2019 to 2021, so Dan Quinn knows him very well. Likewise, he has made 38 regular season appearances in his career. His performance may have dipped a bit, spending about five months with the Texans. But that doesn’t take away from the fact that he could help the cornerback corps. Consequently, the lone star team would end up signing him to the squad on October 25.

Either way, the Cowboys could look to some help in free agency. In these months there is not much certainty of getting a higher level athlete than in the offseason, but there are certain exceptions that can be found. As is the case of Kevin King, who is 27 years old. The defensive back decided to take a year to recover from his injuries. So in his specific case, he is still on the market, not because of a lack of quality, but because of his own decision. During his time with the Packers between 2017 and 2021, his numbers are quite good. Him racking up 30 pass defenses and seven interceptions during his rookie deal. If Dallas wants it, they could call him and see if they get a positive response from the cornerback.

Kevin King with the INT!! 😤😤👏👏 pic.twitter.com/18MdnjTukt

Other options in free agency could be

Given the losses of Lewis and Brown, the group of cornerbacks finds itself in a very big dilemma. Especially since the final stretch of the season will be of vital importance for the Vaqueros. Don’t forget that Dallas is still looking for the top spot in the National Conference. So a positive result against the Eagles and Philadelphia slipping on the schedule can get them there. Only for the moment, the matter of the cornerbacks must be resolved as soon as possible. Especially if Joseph doesn’t measure up in the Week 14 game against Houston.

After the loss of Anthony Brown, how will the cornerback corps be?