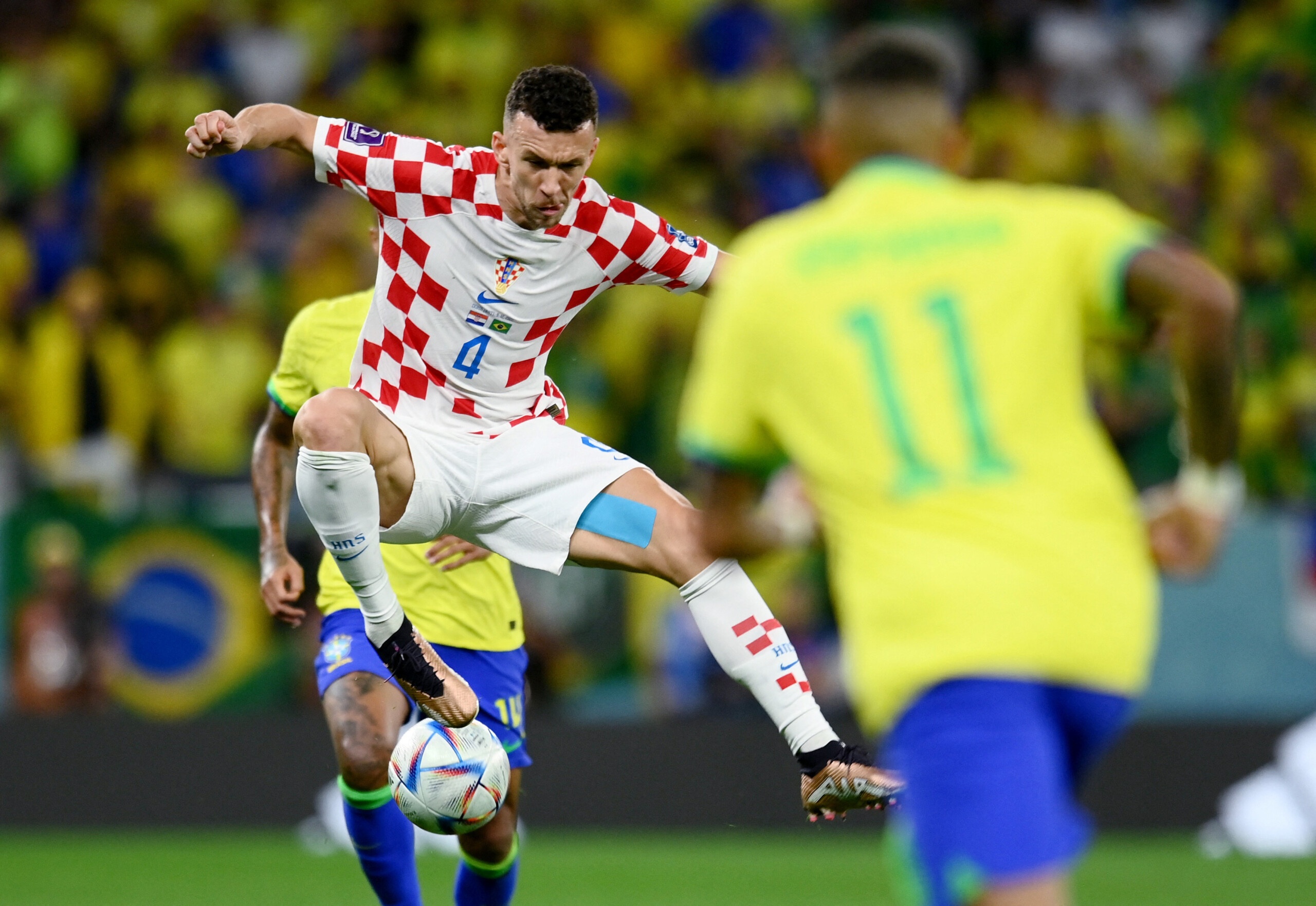 Iván Perisic with all his power against Brazil REUTERS/Annegret Hilse

For those who know him well, seeing him in his National Team, in clubs in Europe and even his past as a multi-sport athlete, it was not surprising that Ivan Perisic anticipate everyone in the area and put a blow to tie the round of 16 duel against Japan that looked ugly for Croatia. The 33-year-old striker, who now plays for Premier League side Tottenham Hotspur, has displayed such qualities in the past. The Croatian team has few more decisive talents than him in its short history. In his third World Cup, he already has six goals – equaling the mythical striker Davor Sucker – and four assists, in 14 games, having scored and assisted both in Brazil 2014, and in Russia 2018 and now, also, in Qatar 2022. Being Furthermore, the first from his country to score in the three World Cups and only the fourth active player -the others are Messi, Cristiano and Shaqiri-. Next week he will be on court against the Argentine team after Croatia beat Brazil on penalties.

But beware, his goes further and has to do with being a multitalented athlete. Lover and amateur practitioner of basketball and boxing, he has also been a beach volleyball professional, along with his career as a soccer player. He even played a World Cup with Croatia, five years ago, in Porec, which generated the anger of Inter Milan, his club at the time.

Born on February 2, 1989, in Split, Perisic practiced various sports since he was a child. “I was full of energy and wanted to do everything. Football, of course, but also a lot of tennis and, especially, basketball”, admitted Iván, raised in a city and in a country with a long tradition in the basketball, with iconic references such as Drazen Petrovic (who died in 1993) and Toni Kukoc, a European star and later a figure in Michael Jordan’s Bulls, between 1993 and 1998. As a teenager, based on the promotion generated in his country, he also started with the volleyball, moving on to the beach version. It was so good that he made it to the Selection of his country and even participated professionally in a date on the world circuit, the Porec tournament, in 2017.

The Selection was two or three goals up, with a Messi in an unnatural way. Julián Álvarez won the 9 in Argentina without being similar to Batistuta or Crespo and Scaloni did well to leave his heart on the nightstand and bet on the best news of the players. Players infect fans and people infect them

He did not do it for the money, of course, nor for the fame. The first thing, he said, he would donate to the federation of that discipline and the second he had left over from being a Calcio player. “I hope my participation helps promote this unique tournament and this beautiful sport. They have given me permission to play it and hopefully I can be up there,” said the man who was later fined by Inter, who claimed not to have given authorization to the 1m87 striker who sometimes also plays as a midfielder.

Perisic made a pair with his compatriot Niksa Dellorco and lost all three of its group stage matches. In the debut, the Croats fell to the Brazilians Saymon Barbosa and Alvaro Filho (first seeded couple in the tournament) in just 28 minutes for a double 21-10 match in Group A. In the other two games they lost again, first against the duo Gibb-Friday and then facing Theo Brunner-Casey Patterson, both from the United States. They finished last in the group, but Perisic was congratulated by the rivals. “It is very difficult to play two sports at a high level and Iván showed that he can do it”, admitted the Brazilian Filho.

After the slap on the wrist at Inter, Perisic decided not to continue his career at beach volleyball, although they assure that he plays it on his vacations. The same happens in basketball. He usually uploads photos and videos to the networks, like the one who is seen with good individual technique and a better shot, being left-handed. He is a fan of the NBA and a fan of the Golden State Warriors., as well as a regular spectator of games, especially when he was in Italy and went to see Milan. “They are two sports that I practice whenever I can and the things that I have been able to absorb from both have helped me for the kind of footballer that I am,” acknowledged Perisic, who made his debut with the Croatian team in 2012 and has already played two Euro Cups and three World Cups. , being a finalist in 2018 and hoping to at least repeat that milestone in Qatar.

Perisic, not only football enjoys the scorer…

But Iván, always active and a fan of sports, is also dedicated to practicing kick boxingIn fact, last year he shared photos of custom workouts he did with Croatian champion Luka Tomic, a rigorous regimen that included kicks and punches, plus various pon exercises.

“Where is Messi?”: the video of the provocation of Australian fans to La Pulga seconds before he scored Argentina’s first goal

From the stands, Socceroos fans chanted against the captain, who responded with a signature goal

The current Premier League player, who had Sochaux as his first club and then spent time at Roeselare and Bruges in Belgium before going to Germany (Dortmund and Wolsburgo), has scored 10 goals in major tournaments with his team -top scorer- and the latter could not have been larger. And more impressive, because he came from behind to connect the great center of Lovrek. His jump was reminiscent of some NBA or those in the arena to finish off over the net. It is clear that, as he said, he took movements from other sports and in this World Cup he applied them again so that Croatia continues to write great history in the World Cups.

Messi’s record assist and Nahuel Molina’s definition of nine: the sequence of Argentina’s first goal against the Netherlands
Messi, historical: he became the top scorer of the Argentine team in World Cups
Brazil out of the World Cup: Croatia eliminated it on penalties and waits for Argentina or the Netherlands

Perisic, the Croatian goalscorer who enhanced his style playing basketball and beach volleyball