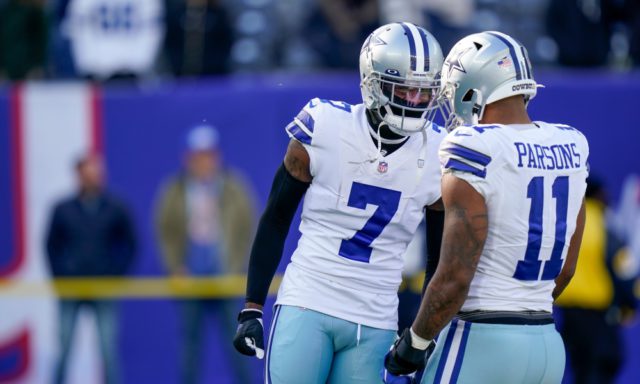 Overall, one of the Cowboys’ bright spots last season had to do with defense. And emphasizing two specific elements, Micah Parsons and Trevon Diggs should not be left out.

The first became the NFL defensive rookie in 2021 after achieving 13 marshal sacks. Aside from this, he also had three forced fumbles, 84 combined tackles and three passes defensed.

On the other hand, cornerback Trevon Diggs had a dream season by recording 11 interceptions in his second stint as a pro. Clearly, both defenders made the Pro Bowl as the Cowboys lost in the wild-card round to the San Francisco 49ers.

As for Parsons, he’s excited about the upcoming season and hopes he and Diggs are just beginning a new era for the Cowboys. “It’s hard to say we’re the best because I know we’re young and we still make mistakes,” Micah said. “It’s hard to get above Aaron Donald, the best defensive player in history, along with cornerback Jalen Ramsey. So I won’t do it yet, but I think we can become them or even better if we learn and stay together.”

Despite Micah’s statements, you also have to take into consideration that both Donald and Ramsey haven’t played together that long. If we talk about the Rams cornerback, he started his career in Jacksonville until they traded him in October 2019 to Los Angeles. While in the case of Donald, he has been part of the Rams since they were still in St. Louis, being the 13th pick in the 2014 Draft.

However, both are considered the role model when it comes to defensive duo throughout the NFL. All this has resulted in the title of the Rams in Super Bowl LVI, being the current champions of the league.

Clearly for Parsons, using them as an example has been key to conveying his relationship with Diggs. Both players began their careers with the Cowboys and hope to continue wearing the star on their helmet for a long time. Likewise, Parsons is full of praise for Trevon, whom he sees as a great player and professional on the field. Considering he’s been criticized a lot for giving up 1,016 yards in coverage, it doesn’t seem to bother Micah much. Don’t forget that Trevon has had more than ten interceptions last season, something not seen since Lester Hayes and his 1980 campaign with the Raiders with 13. As well as the following year, thanks to Everson’s 11 interceptions. Walls with the Cowboys.

“That’s what makes him the player that he is, his confidence, his willingness to go after the ball,” Parsons continued. “I’ve seen a lot of cornerbacks who don’t give up yards, but their teams don’t win games. This league is about how many times you can return the ball, and you do it with recoveries. I prefer that at any time.”

Along with these statements, he also sees his teammate as the best defensive player in the NFL thanks to all his accomplishments in 2021. “Without question I think Diggs was the best defensive player in the league last year,” Micah continued. “We’ve seen 20 sacks before, but at this stage, we haven’t seen anyone get more than 10 interceptions. So it seems disrespectful to me, since he deserves all the credit in the world and to be named in the top five cornerbacks if not the best in the league.

Of course, Parsons himself is on a quest to break new records, at least as far as quarterback sacks are concerned. The current record for sacks is 22.5, which the Steelers’ TJ Watt achieved in 2021, matching Michael Strahan’s mark in 2001 with the New York Giants. “Yes, 15 is the minimum sacks, it’s what I want to achieve. But the goal is definitely 23, to break the record,” said the cowboy linebacker.

Parsons’ statement may be pretty bold, but you have to agree that the guys have a lot of potential to go far in the NFL. Now, it’s not just about numbers and individual success. They’ll have to help the Cowboys get to the top if they want to be in the same conversation as Ramsey and Donald. But for this, we will have to wait for the training sessions in California and what the 2022 season will bring us.

According to Micah Parsons, he and Trevon Diggs may be the best defensive duo ever.