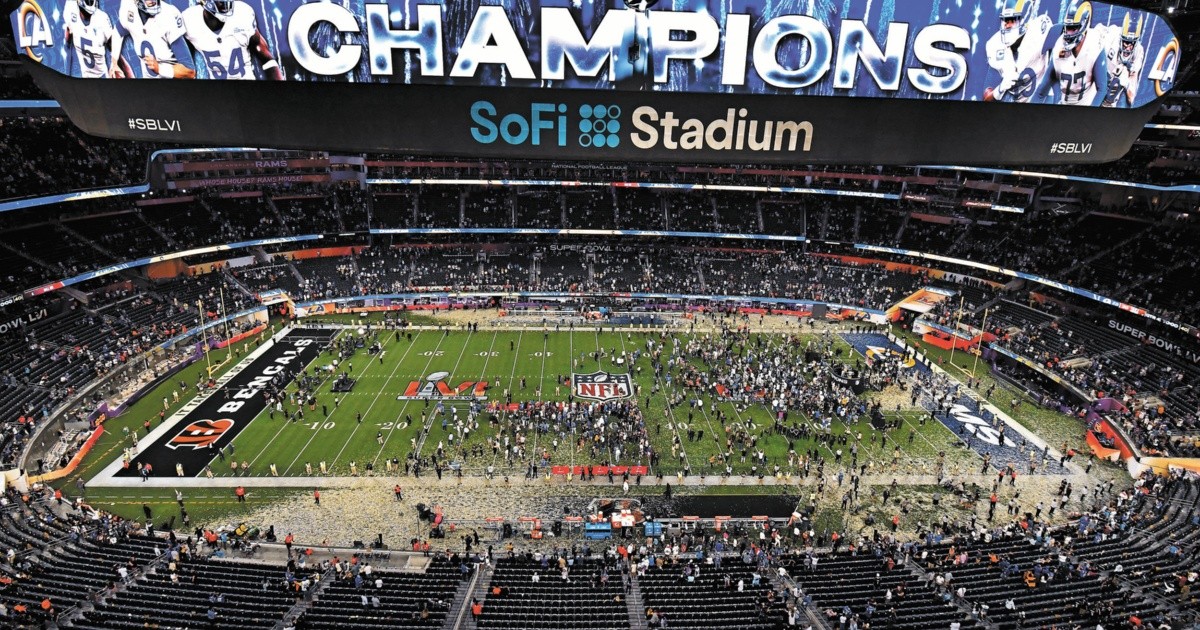 A total of 15.3 million people in Mexico joined the transmission of the Super Bowl LVI according to data from HR Media that took into account the broadcasts of Azteca 7, Channel 5, Fox Sports, Fox Sports 2, ESPN and ESPN 3. The consultant stated that 12.8 million watched the game between Rams and Bengals. For its part, Nielsen Ibope Mexico, which records the audience of open television channels, indicated that 10.6 million people followed the transmission through this option.

According to HR Media, the audience profile was made up of 30% working men and the peak audience was for the halftime show.

In 2015 the Super Bowl had its best audience of the decade, 15.5 million people watched the duel between patriots Y Seahawks, and since then, this figure has progressively decreased. By 2021 it was at 11.56 million according to data published by TV Azteca and TUDN (Channel 5), the two open television signals. This year, the TUDN network had an audience of 6 million people and TV Azteca added 4.6 million. In these figures, the television station took into account the reach of the audience, that is, the number of people who tuned in to the game for at least one minute.

This year the Super Bowl was seen through TUDN (Channel 5) by 6 million people and TV Azteca added 4.6 million. In these figures, the television station took into account the reach of the audience, that is, the number of people who tuned in to the game for at least one minute.

“One of the main factors that influences (in the number of the audience) is the popularity of the teams that come to play the superbowl. It happens in all sports, if they are not as popular teams in Mexico, the audience does not respond in the same way. Last night’s number on open television is quite good, if we add what was accumulated by those who broadcast it on pay television, the number increases”, Alberto Sosa, General Director of TUDN, told this newspaper.

This year’s Super Bowl was broadcast in Mexico, in addition to the six channels between open and pay television, also on their respective live streaming platforms. For TUDN, the digital audience represented approximately 10%.

In addition, since 2016 the league’s OTT (NFL Game Pass) is available in our country with all the games of the season, according to data from Arturo Olivé, general director of the NFL Mexico, this platform increased its subscriptions by 100 % in the last year, although it did not reveal the exact figure.

When leagues decide to launch their own broadcast platforms, such as Game Pass, is the value of broadcast rights reduced for television stations?

“No, the growth in television costs has been permanent throughout the years and it is increasing. The argument, also valid, is that there is a greater number of households and viewers who watch it through traditional television,” said Sosa.

The General Director of TUDN indicated that the number of subscribers in Mexico to Game Pass does not currently represent a threat to traditional television, “it is a good platform but it is only used by those who are extremely fond of it, in this case the NFL, but it is still a relative minority.”

The medium Expansión explained that in the Mexican market there were more than 30 streaming platforms in 2021 according to The CIU consultancy. Almost 75% is dominated by Netflix and the remaining 25% is distributed among various platforms that focus on the mass public or bet on a specific niche, such as those interested in sports, among which Fox Sports, Chivas TV, MLB. TV (from the baseball league), F1 TV (from Formula 1), NBA League Pass and NFL Game Pass.

Among this offer, sports analysts have the perception that the NFL is the sports entity that has had the most success in the pay-per-view mode:

“I think that the only pay per view that has worked in Latin America is that of the NFL. It seems to me that while everyone is fighting for a certain niche, what people who are willing to pay for ESPN Star +, or for the competition, consume the most is the NFL. Within this change that there is that the kids are watching TV in another way, on their Ipad or YouTube, the NFL is the one that defends itself the most, “said John Sutcliffe, a reporter for ESPN.

Pablo Viruega, ESPN Sports Commentator, indicated that after the emergence of companies like Netflix, what began to support cable television were sporting events, at that time, the only way to watch them.

“Now with streaming you have another opportunity to watch a different amount of sports that is difficult to see on linear channels and maybe that rating goes only to the linear channel and you have that other audience that doesn’t watch it on television but watches it on streaming. The Super Bowl is going to be very interesting, because it is going to bring the family together in front of the TV and now with streaming on Star+ it is going to be interesting to see the results of that exercise,” said Viruega.

Audience in the United States

In the United States, a phenomenon similar to that of Mexico had occurred in terms of audience. In 2015 the Super Bowl reached 114.4 million viewers, the highest figure in history, and by 2021 the number of people who tuned in to the game was 99.9 million. However, the expectation this year was to reach 117 million as reported by AS in English, despite the fact that the official figure has not yet been revealed.

Although NFL viewership in the United States had been on the decline, the 2022 regular season saw a 10% increase with an average of 17.1 million viewers across television and digital platforms. Factors such as adding one more week of games to the regular season and more interesting games (64% of all games this season had a single score difference in the fourth quarter), have contributed to this increase.

“There was a general downturn in the NFL and suddenly this year there was a boom. Dallas’ Thanksgiving game against the Raiders on ESPN had the highest ratings in America since the 2009 Dallas-Philadelphia game,” said John Sutcliffe.

According to the Global Media Report SportBusiness, the NFL is the reigning individual ownership of broadcast rights. By itself, it accounts for 15.4% of total global sports broadcasting revenue and will increase its dominance in 2023, when its new agreements with US television stations Disney, Fox, Comcast, CBS and Amazon come into force. Together, these networks will pay around $110 billion over 11 years, almost doubling the value of their previous contracts.

10.6 million Mexicans tuned in to the Super Bowl