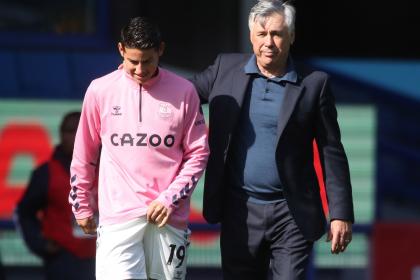 Carlo Ancelotti left Everton in surprise when Florentino Pérez picked up the phone and offered him a return to Real Madrid. And since then the British club collapsed and has three coaches in 2022 alone, while the Spaniard is the leader of LaLiga and favorite, as always, in the Champions League.

The explanation? Abdoulaye Doucoure offered a very precise vision: “He is the most human coach I have ever met. He also the most honest,” L’Equipe said via Sport Witness.

Ancelotti is the coach who achieved the best performance in James Rodríguez in his entire career and that closeness that the Frenchman speaks of explains a little why. In fact, Doucouré said that, when he arrived at the club with the Colombian and Allan, the manager made landing on Merseyside almost unnoticeable.

“Carlo had invited me, Allan and James, the three players, to dinner at the restaurant with our agents. We had spent a warm, relaxed time, talking about everything, football, but also about our lives, until 1 or 2 in the morning. I had never experienced that in my career”, revealed the Frenchman.

That harmony is what makes the Italian one of the most successful in the world. That and his honesty: “When I arrived he explained to me that at first he didn’t particularly love me but that the leaders had ended up convincing him. My first day of training coincided with the day before a match. Carlo comes to see me on the field and says: ‘So, Abdou, do you want to play tomorrow?’ I tell him yes, of course. He told me, a little mockingly: ‘Well, let’s see if you’re training well’, and he left laughing. I knew then that he was going to play and I didn’t want to let him down. He calmed me down, set me free. He was one of the men who changed my game, ”said the player, today under the command of Frank Lampard.

That Everton started the 2019 campaign in a brilliant way, but injuries and the level of the Premier relegated him to tenth place, which in any case was not bad, considering that today the team is in 16th place, with 22 units already only 5 from the relegation zone.

For Doucouré, another merit of Ancelotti was maintaining a positive atmosphere within the team despite the results. “Sometimes, the day after a game that I lost, he couldn’t be very well. He detected it in my face. Then, on the pitch, he came to see me and said: ‘You played a good game, Abdou.’ played a bad game but he looked me in the eye and insisted: ‘You did what I asked you to do.’

That ability to absorb the pressure for him when things are not going well, to always see the good, to be so close and be so aware of every detail about his coaches, makes players like James go to the field with much more freedom, to do what they know, to play football. That is why Ancelotti is living a new youth with his Real Madrid… while the Colombian is away from everything, in the exotic Qatar, watching the race go by…

They reveal how Ancelotti motivates James: ‘he’s the most human I’ve ever met’