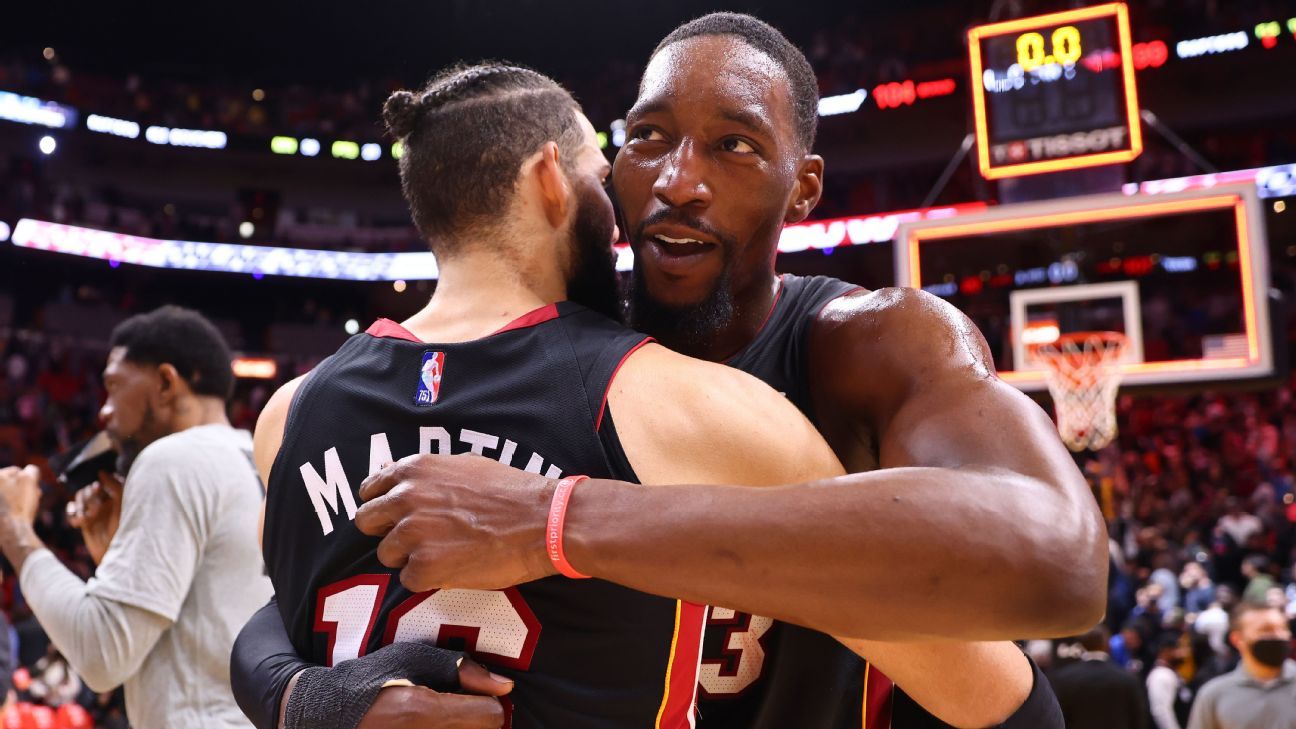 THE ANGELS — The Miami Heat equaled the Chicago Bulls at the top of the Eastern Conference in a long and exciting day of the NBA for the Martin Luther King holiday (twelve games) in which the Los Angeles Lakers broke their losing streak and the Phoenix Suns and the Cleveland Cavaliers kept shining.

Jimmy Butler (triple-double with 19 points, 10 rebounds and 10 assists) led the Miami Heat to a tight victory against the Toronto Raptors that allows the Florida franchise to share the leadership of the East with the Chicago Bulls having won 7 of their last 10 games.

The good news is accumulating for a Heat that brought Bam Adebayo back after a month and a half out due to injury (14 points, 9 rebounds and 2 assists).

In the Raptors, who only lowered their arms after a triple by PJ Tucker with 20.7 seconds to go, Chris Boucher was the top scorer (23 points and 10 rebounds).

The Angelenos, at home, beat the Jazz 101-95 with another very good performance from LeBron James, author of 25 points, 7 rebounds and 7 assists. On the visit, Conley added 20 points.

Stanley Johnson, with 10 points in the last quarter, was the unexpected hero of the Los Angeles Lakers, who after three straight losses and immersed in a very worrying dynamic they took oxygen with their comeback against the Utah Jazz.

LeBron (25 points, 7 rebounds and 7 assists) and Russell Westbrook (15 points including a colossal dunk in the second quarter) joined efforts for the Lakers while Rudy stood out in the imprecise Jazz (36.9% in field goals). Gobert (19 points and 16 rebounds) and Mike Conley (20 points and 4 assists).

The Cavs prevailed 114-107 with a great job by Garland -22 points and 12 assists-, well supported by Jarrett Allen -14 points and 10 rebounds-, against a Brooklyn that failed in the decisive moments.

Already without the injured Kevin Durant, the Brooklyn Nets added his third loss in the last five games against a thrown Cleveland Cavaliers (five wins in a row) and that they were guided by Darius Garland (22 points, 6 rebounds and 12 assists).

Kyrie Irving (27 points, 7 rebounds and 9 assists) and James Harden (22 points, 7 assists and 10 rebounds) were the Nets’ benchmarks but they also starred in the key play of the game, as they lost a decisive ball with 17 to go. seconds when the Nets were 3 points down on the scoreboard.

It was 121 to 107, in a duel in which the shooting guard scored 48 points, thus marking his highest record in the season. Chris Paul was another standout, with 15 points and 12 assists.

The 48 points from an extraordinary Devin Booker (in addition to his 5 rebounds, 6 assists and 3 steals) They were an impossible slab to lift for the San Antonio Spurs in their matchup against the Phoenix Suns, who have won four in a row and have opened a gap with the Golden State Warriors at the head of the West.

Jakob Poeltl (23 points, 14 rebounds and 4 assists) was the offensive benchmark for the Spurs who held out until the last quarter but suffered 51.6% of the Suns’ field goals.

Immersed in a major crisis with four straight defeats, the Chicago Bulls were totally outmatched by the Memphis Grizzlies who continue to attract attention in the West from the hand of Ja Morant and Desmond Bane (25 points per head).

DeMar DeRozan (24 points and 5 rebounds) and Ayo Dosunmu (15 points, 10 rebounds and 6 assists) marked the passage of a Bulls that continue to miss the injured Zach LaVine.

The Spanish Santi Aldama played three minutes for the Grizzlies in which he missed the only shot he tried.

The Slovenian was a figure and the Mavs celebrated 104-102 against the Thunder. The local crack signed a triple-double with 20 points, 11 rebounds and 12 assists.

The Dallas Mavericks suffered until the last moment to beat the Oklahoma City Thunder and thus add their third victory in a row.

In the Thunder, who had a possession to tie or win the game and ended up losing that ball, Shai Gilgeous-Alexander stood out (34 points, 6 rebounds and 5 assists).

In the absence of LaMelo Ball, the power forward took center stage and scored 38 points and grabbed 12 rebounds. Julius Randle finished with 18 points and 10 rebounds for New York.

the dominican rookie Chris Duarte played a great game with the Indiana Pacers (24 points on 10-of-14 shooting, 7 rebounds, 6 assists and 3 steals in 34 minutes) but he couldn’t prevent his team from losing to the Los Angeles Clippers, who made 18 of 36 triples.

Nico Batum played his best game so far this season with the Angelenos (32 points, 5 rebounds and 3 assists) while the Spanish Serge Ibaka played 7 minutes in which he got 3 points (1 of 3 shots), one assist , a robbery and a stopper.

The Frenchman scored 32 points to guide the victory of the locals. For Indiana, Chris Duarte finished with 24 points, seven rebounds and six assists.

After losing their last five games, the Atlanta Hawks gained air with an important victory against none other than the defending NBA champions, the Milwaukee Bucks.

The Hawks were much superior in the last quarter (38-26) and that allowed them come back from a game in which they had been behind in the first three sets.

Trae Young (30 points, 4 rebounds and 11 assists) led the stampede in the last minutes of the Hawks while Khris Middleton (34 points, 7 rebounds and 4 assists) was the most effective player of a Bucks that went from more to less .

In a duel between two who are fighting for the last playoff spots in the East, the Wizards prevailed 117-98 after a great collective game. In Philly they fell short of Embiid’s 32 points.

A very choral performance by the Washington Wizards (seven players over 10 points) got stop Joel Embiid’s gale (32 points and 8 rebounds) and submit to the Philadelphia 76ers.

Montrezl Harrell (18 points and 7 rebounds) was the top scorer for the Wizards in which Brazilian Raul Neto had 6 points, 2 rebounds and 3 assists in 23 minutes.

Trae Young starred with 30 points and 11 rebounds to end a record 10-game losing streak at home. Middleton and Antetokounmpo finished with 34 and 27 points, respectively.

In a dream setting like New York’s Madison Square Garden, Miles Bridges of the Charlotte Hornets had the best performance of his NBA career (38 points on 14-for-20 shooting, 12 rebounds and 5 assists) and knocked down the New York Knicks with authority.

RJ Barrett (18 points, 12 rebounds and 5 assists) and Julius Randle (18 points, 10 rebounds and 3 assists) could not secure the local victory despite the fact that the Charlotte team did not have LaMelo Ball due to an illness unrelated to the coronavirus .

With Tatum unstoppable -27 points and 8 rebounds-, the Celtics beat New Orleans 104-92, which squandered an 18-point lead and had to see the locals win.

The Boston Celtics rowed against the current in the second half to win a game against the New Orleans Pelicans who were losing at halftime and that they were finally able to win thanks to Jayson Tatum (27 points, 8 rebounds, 3 assists and a steal).

The Dominican Al Horford contributed 12 points, 7 rebounds, 4 assists and a steal in 25 minutes for the Celtics while Jonas Valanciunas was the most outstanding in the Pelicans (22 points, 14 rebounds and 4 assists).

The Spanish brothers Willy and Juancho Hernangómez did not have minutes in the Pelicans and the Celtics, respectively.

Portland went ahead in the game to close an interesting 98-88 against Orlando as a visitor in the NBA. The star of the match was Nurkic with a double-double for the winner: 21 points and 22 rebounds.

The Portland Trail Blazers took the victory away from home against the Orlando Magic in the return game of CJ McCollum (16 points) after more than a month without playing due to injury.

Brothers Franz and Moritz Wagner (14 points each) were the Magic’s attacking benchmarks.

The Heat are scary in the East, Lakers breathe, and Suns, Grizzlies and Cavs shine