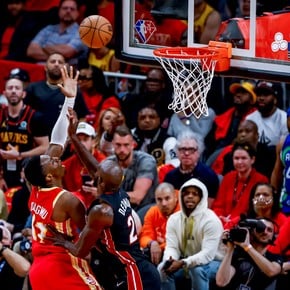 Since the beginning of the season, Boston wrote down his name as one of the candidates of the 2021/2022 of the NBA and, at the start of the Playoffs, he did not disappoint. It is that the Celtics were unbeatable for Brooklyn Nets who, despite his figures, could not do anything to reverse the series and prevent the convincing 4-0 of his rival. Thus, hand in hand Jayson TatumBoston has already secured its spot in the Eastern Conference semifinals.

Armed to go for the ring, the Nets of Kevin Durant Y Kyrie Irving ended a season marked by many lows and few highs, and were overtaken by a solid Celtics, in which teamwork triumphed, led by Tatum, Marcus Smart and Jalen Brown. After keeping an even first point and successfully overcoming the second and third games, Boston won 116-112 in Brooklyn and became the first team to seal its place in the next instance.

Now wait for the winner of the duel between the Bucks of Luca Vildoza Y chicago bullsa series that currently has Milwaukee up 3-1.

Tatum, who left the court in the absence of 2m49 after adding his sixth personal foul, contributed 29 points, three rebounds and five assists. After the departure of the figure, the Nets added a 4-0 that left them just one point behind Boston, but it was not enough to take the victory. In addition to Tatum, the contributions of Marcus Smart, with a double-double of 20 points and 11 assists, in addition to five rebounds, and Jaylen Brown, with 22 points and 8 rebounds.

In Brooklyn, Durant’s effort, with 39 points, 7 rebounds and 9 assists it was not enough to force the series to a fifth point. Besides, Seth Curry contributed 23 points and 5 triples, while Kyrie Irving scored 20, with 5 rebounds and 5 assists.

What did Kevin Durant say after the elimination?

The figure of the Nets recognized the superiority of the Celtics throughout the series and noted them as candidates: “They were better, we didn’t play like them. They are the best defense in the league, they shot with high percentages. They killed us with the rebounds and we looked at each other, and we couldn’t compete on that. Give the Celtics credit, they have a chance to do something big in these playoffs.”

“I have no regrets, things happen”, he commented emphatically when asked about how his sports relationship with Kyrie Irving Y james harden. And he closed: “This summer will be very important for our team and we will see where we get to.”

The Celtics swept the Nets of Irving and Kevin Durant