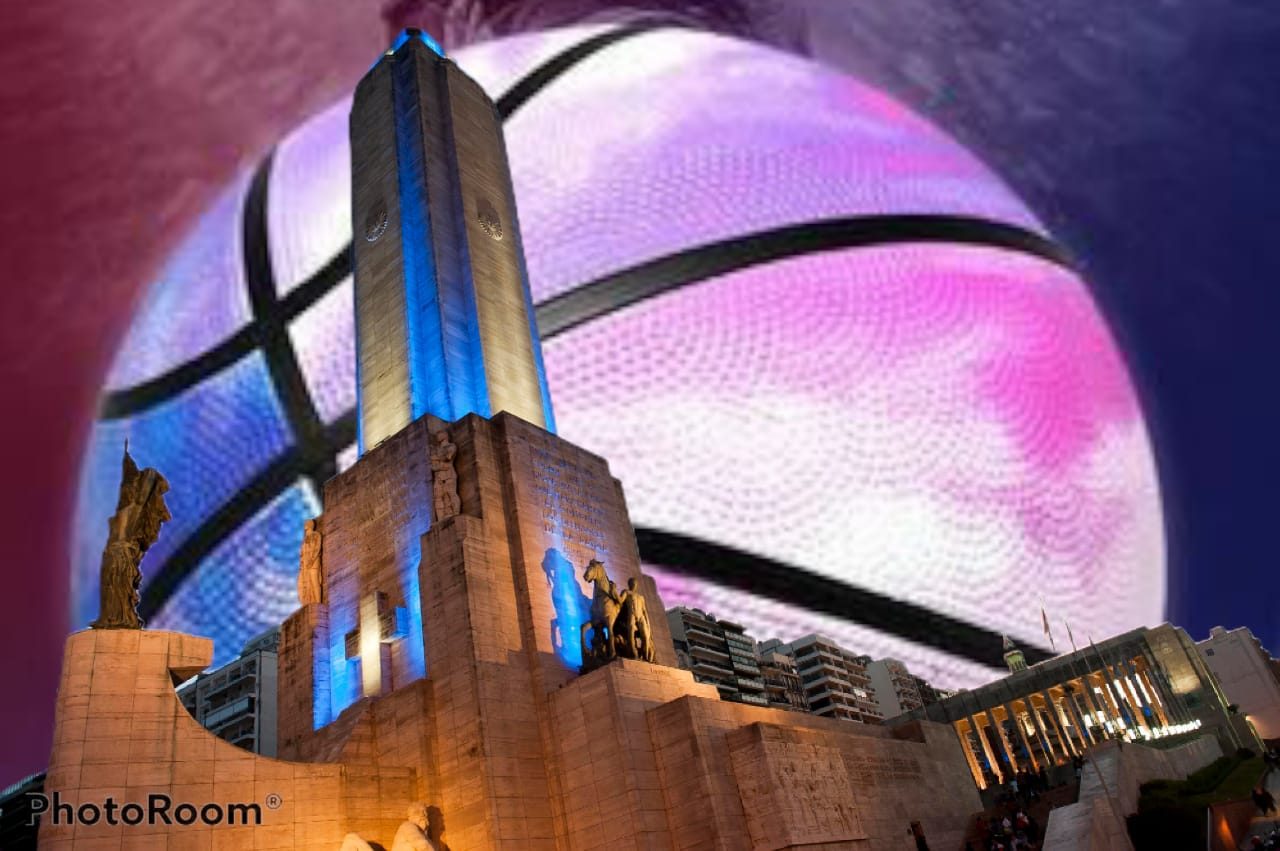 The generality, in any field, has a tinge of injustice because each person has their peculiarities, defects and virtues, and it is impossible to try to include all under the same definition. What can be done is to play with opinion, with one’s own gaze and analyze the variety of concept that exists, which leads to being able to draw a map, a melting pot of characteristics that at some point unite and amalgamate.

Since 2020, June 27 has an enormous significance for the sport of the city, which established the “Municipal Day of the Rosario basketball player” in recognition of Víctor Hugo Le Bihan, player and technical director of the city with a recognized career with success at all levels and presence in the national team, but also rooted in neighborhood clubs.

As at that time it is good to remember that this may be the salient characteristic of the Rosario player. His training in the neighborhood, that romance with basketball that was born ball in hand towards the club to shoot the hoop, to establish human relationships from the pick and pass, define roles and personalities from very early with his function in the rectangle.

It is clear that it is the day of Buby, born on June 27 and who is unfortunately missed, but from his generosity and passion for sports and talk he would have been happy with this “generality” that provides that it is everyone’s day and , why not also of all, those people who play basketball in the city of the Monument.

A few broke barriers and went to the League or abroad. Many others remained in basketball here. They all have the same passion and similar responsibility, because the love when it comes to putting on the shoes to go in to play is identical.

On this day to remember Buby and all the greats but also the lesser known of basketball here, it is also worth remembering those who are no longer in these difficult years of pandemic. And to all those who cannot develop their work in basketball, but also their passion in the sport for the necessary restrictions, from the youngest to the oldest.

“I think that the characteristic that differentiates us is competitiveness. There are many clubs in Rosario and we get used to competing in the neighborhood. That love that we generate for our club also causes rivalry, which when healthy is good. The other can be friendship, the sense of belonging to the club. It is not just anything for us, it is something important. When I was in juniors I admired my brother Hugo, Diego Foradori because I identified with him for the position and Mono Tripelli, who completed the trident ”.

“The main characteristic has always been the fundamentals that those who stand out have and always dedication, the will to want to win even in the worst circumstances. The best was the Buby Le Bihan. And then I was lucky enough to see Sucatzky, Bernardini, Boccia, Joaquín Fernández, Domínguez and so many others ”.

“The distinctive characteristic of the Rosario player was linked to his training in neighborhood clubs, with a lot of belonging. He was more mischievous, he was shooting with the only ball there was all day. There was dedication, commitment and identification with the club. As I was trained in Ciclón, I admired and wanted to imitate Chacho Valdez and Colorado Arreche, but I also got to know the referenets of each club, Buby Le Bihan, Caco Aguilera, Mario Bernardini, Toscano Ludueña, Pepito Ferranti, Raúl Burgos, each one in his club ”.

“The Rosario basketball player is somewhat cheeky to play, he has a quota of self-centeredness, with a lot of self-love and a style of play that is more impulsive than intelligent on some occasions. Nowadays he is more athletic than founded and has that typical ambiguity of the local tournament of not becoming entirely professional, with the desire to want to be but not finish assuming all the responsibilities. I admired Juan Rapp and the point guard from Newell’s Barovero ”.

“The litter of our age grew up watching the National League and a local tournament of the strongest in the country. Within that context, the characteristics of the players that we were able to enjoy were with good individual technique but above all with an understanding of the game. The memory of the Provincial championship comes to my mind, there are many players that I admired, to name a few Olivier or Robledo ”.

“The Rosario player is not fairly recognized by ourselves, by the people of the city. I believe that it has all the foundations to succeed at any level and we have many examples throughout the country or outside the country. Internal competition is very demanding. There are several players I admired among others Montanini, Le Bihan, Rapp, Sucatzky, Bianchini, to name a few ”.

“I think the main characteristics of Rosario players is passion and effort. While there are many female players in the city who are very talented, I think the other characteristics predominate. Women’s basketball in Rosario is mostly amateur and the effort and passion of all the players from the different clubs is reflected when it comes to training and playing. As a girl I admired the players who played for my club, Daniela Oldani, Natasha Spiatta and Natalia Ríos ”.

“Having a great local internal league within our city makes the training and competition of each of the players high voltage. Our players tend to have a great coordination level from a young age, which means that they can quickly acquire skills of all kinds, good control of the ball, very athletic and with great technique in terms of their fundamentals. They are very talented players. Another thing that differentiates us is the competitive mentality, dedication and sacrifice, giving everything accompanied by great mental speed. And that mischief that characterizes the Argentine player himself. When I was 6 years old, I was a scorer of a certain Luis Faraht in Provincial. At this time I was playing football and he was an inspiration for the orange for me, I liked to see him play, aggressive, fast, intelligent, a second ahead of the rest of the stadium, character, a pure talent. And in Saladillo, Diego Turi, his throwing technique, a jump to perfection, his style of play, his vision in the open field to pass balls without looking. It was also a source of inspiration ”.

“For me, the player from Rosario is characterized by his technique and his great offensive potential. And something that is decisive is the competitive mentality with which everyone is seen, young or old. Whatever level they play at, you will see them leaving everything! I saw a lot of players when I was in the lower ranks because the level was excellent and I can name two from the Student, Alejandro Bellía who was also the manager of the lower ranks, and the great Andrés Olivier, whom we all admired, I think ”.

“The main characteristic of Rosario players for me is effort, dedication and passion. When I was a girl I remember admiring Emilia Giustiniani a lot in that tremendous team that Ben Hur had ”.

“In my opinion, Rosario has always played good basketball, but perhaps not with as much passion or grit as in the interior of the province, but there were many players with a lot of quality in their game. Of the players I saw in my junior years (I only played youth in Rosario) the one who always caught my attention was Daniel el Coco Montanini. And in recent years it is impossible to stop naming Facundo Sucatzky, in his position by far the best I saw in this city ”.

“The Rosario basketball player is responsible, persevering and a good partner. At least those are the characteristics that I tried to transmit in each of the teams that I was part of. I always admired Juan Andrés Olivier, a total crack on and off the court, who, although he was not born from Rosario, played for a long time in city basketball ”.

“I think we have everything. There are talented, lazy, sacrificed, egg holders, humble, enlarged .. haha ​​.. but if I have to choose one I would say the claw.In inferiors I admired those who were in Gymnastics at that time, the Colo Maya, the Raffo Bear, the Carasatorre , Pablo Palma, etc… ”.

“I think the players from Rosario have a bit of passion, talent, foundation, effort, and grit. It seems to me that the pandemic is depriving us of talented players from continuing to develop in the way they have been doing. Who did he admire? I do not know. But I had the pleasure of seeing Leonor Riveros play, Roxana Grossi, the pleasure of playing with Chachi and Mónica Gallardo, Claudia Velizan, who was a different player. And obviously more girls than me, Iris Ferazzoli, an animal, Natalia Ríos, one of the best basketball players in Rosario. And obviously, I can’t forget the friends that basketball gave me, with whom we share good and bad: Daniela Oldani, Verónica Rodríguez and Marisa Cardozo ”.

“It seems to me that the Rosario player in general is brave, tactically disciplined and agile to adapt to different game situations. In the juniors I admired Tongui Morange because he was my coach in premini, he was the captain of the first and we won the first championship ”.

“The first player I admired was José Bosco. I remember the Atalaya team led by Turkish Grimaldi (I think 2005), and Gustavo Móndolo’s in 2006, both of them great teams, and José was always the player I most admired and who had as a reference, beyond the fact that he was not Rosario ”.