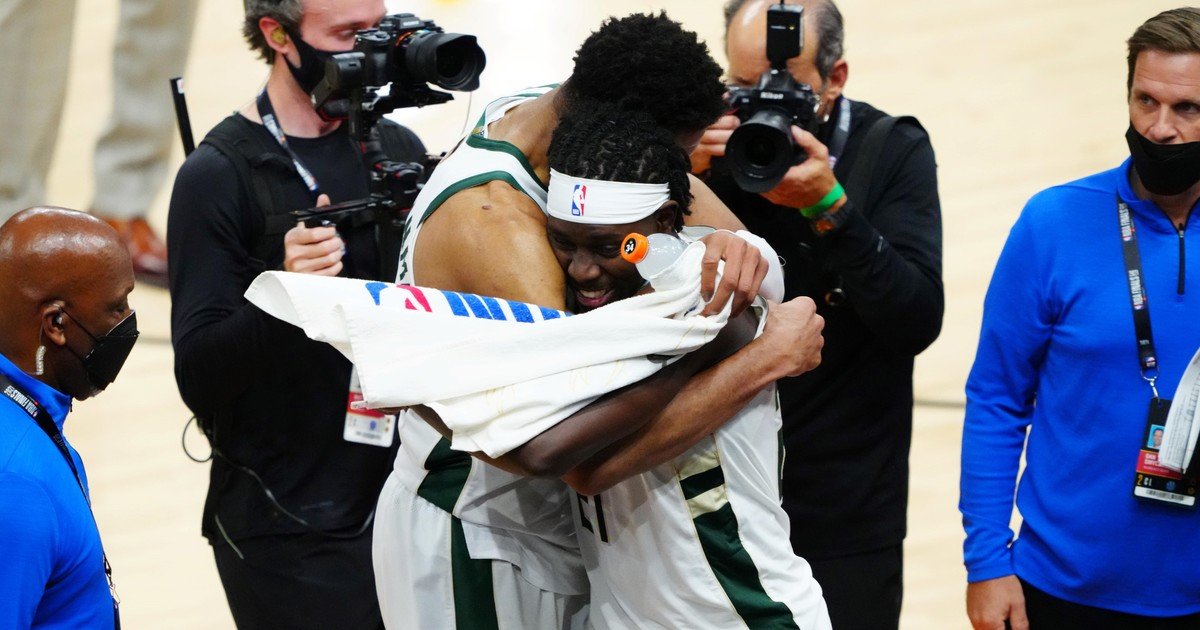 Milwaukee bucks came within one victory (3-2) of becoming the new champion of the NBA after defeating this Saturday, as a visitor, Phoenix suns (123-119), all in a game in which he was able to go back up to 16 points behind.

In Game 5 of the Finals at Phoenix’s renowned Footprint Center, the two teams shared moments of dominance, with the Suns sweeping the first quarter (37-21) and leading at halftime (64-61) thanks to the good job from Devin Booker – who finished the game with 40 points and 17 of 33 shots from the field – and from the defense.

However, the lack of success by Chris Paul (21 points and 11 assists) and Deandre Ayton (20 points and 10 rebounds) in key moments decimated the local team too much, which received 79 points between the second and third quarters and succumbed to a tight ending.

In the meantime, the Bucks took refuge in their big stars; Khris Middleton (29) was fine on decisive shots, Giannis Antetokounmpo squeezed (32) and Jrue Holiday was man of the game with 27 points and 13 assists.

Now, they will seek to win the title, which would be the second in their history and the first since 1971, at the Fiserv Forum this Tuesday from 22.

And what did Giannis Antetokounmpo say?

Giannis Antetokounmpo and the Milwaukee Bucks are one victory at home away from being crowned NBA champions, but the Greek star on Saturday insisted on modesty as the fundamental principle for the success of this team. “We have to continue in the present and continue being humble as much as we can. When this team is humble, this team is very dangerous, “he said. at a press conference.

After dominating the game with a firm hand from the second quarter, the Bucks found the Suns one point (120-119) and with home possession with only 29 seconds left. The ball went to Devin Booker, but Holiday snatched it from him and gave a tremendous alley-oop on the fast break to Antetokounmpo, who also received an additional free kick.

.The Greek failed from the personal, but grabbed his own rebound and Middleton sentenced in free practice. Antetokounmpo praised Holiday’s theft: “It was the winning move of the match.”

“We are one game away from being champions, one game away from being the history of this sport, from always being there. No one can take that away from you. And being able to do it in front of our families and our fans is a great thing, “he admitted.” But there are still steps until we get to that. It’s going to be awesome (playing at home for a ring). It will be great to do it in front of our fans, “he said.

Another great match from Giannis.

And what does Chris Paul think? And the great Booker?

In order to Chris paul Nothing is decided yet and he asked his team to be ready for the next game. “We knew this wasn’t going to be easy. We didn’t expect it to be. It’s tough. Our coach has told us all year long: what we want is on the other side of toughness. And it can’t be harder than now.” he said at a press conference. “So we have to regroup and learn from this defeat. But this is not over: we have to be ready for the sixth game “he added.

Until the last bars of the game, the Suns missed the best version of Chris Paul, who in the end finished with 21 points and 11 assists and who was key to trying the comeback. Paul was asked specifically about the second quarter of the game, which started with a clear 37-21 in favor but ended at halftime with a 64-61 for the Bucks after a huge set by the visitors (43-24).

“The games last 48 minutes. I’ll go back to it and watch that second quarter, but we have to play how we started the game. We have to get a whole game like that, especially going to Milwaukee,” he said.

For his part, Booker acknowledged that this was “a tough loss” for the Suns. “We got off to a great start and we got carried away. They remained resilient and kept playing,” he said.

The pain of Paul and Booker for the closing of the game.

As he has said on other occasions, Booker insisted that the Suns’ game begins with defense and said they must improve there for Tuesday’s decisive game in Milwaukee.

Finally, the young guard was asked about the key play of the game, when, with 29 seconds left, the Suns were losing by just one and had possession. “I tried to score, Jrue was behind me. I turned around and he was right there,” Booker summarized.