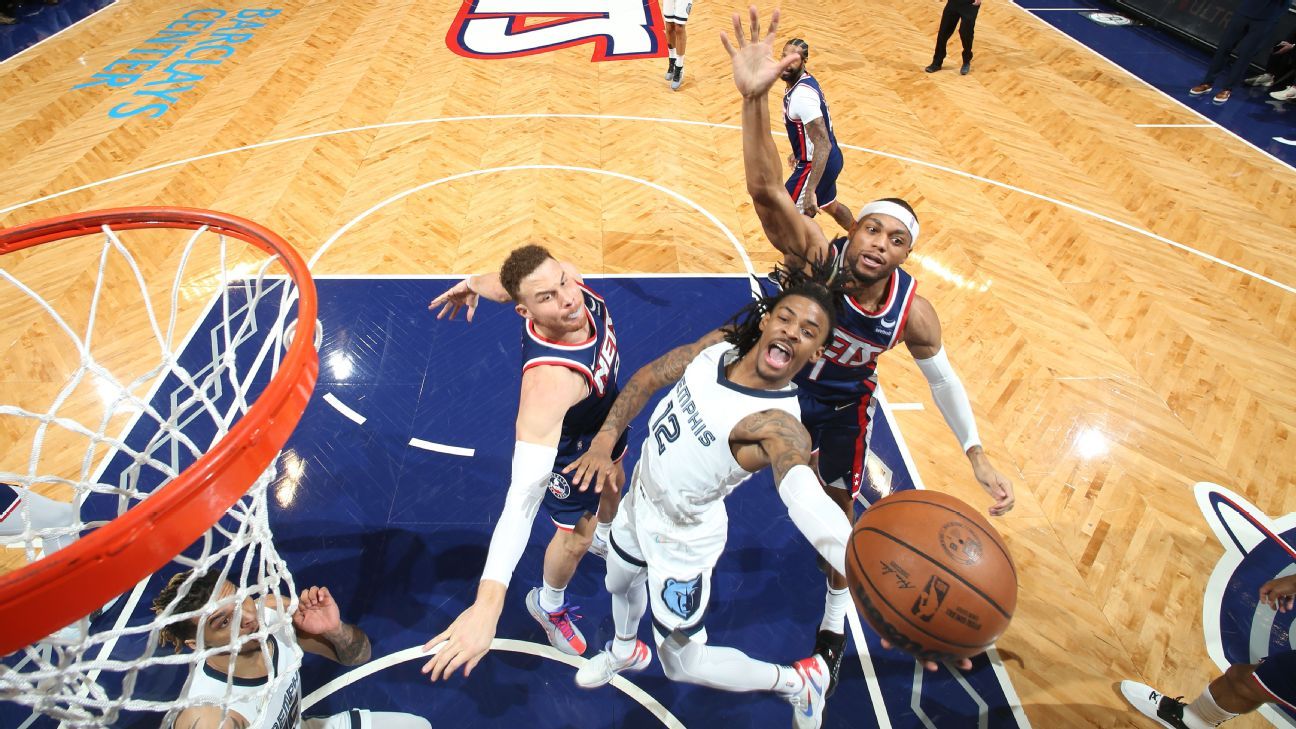 LOS ANGELES – Ja Morant led the Memphis Grizzlies on Monday to a major win over the Brooklyn Nets while the Detroit Pistons they surprised the Milwaukee Bucks by Giannis Antetokounmpo, and Luka Doncic beat Facundo Campazzo in the NBA.

In a busy day with numerous outstanding duels, the Golden State Warriors knocked down some Miami Heat in which Jimmy Butler was injured, the Chicago Bulls extended to eight his consecutive winning streak, Y Trae Young scored 56 points which were insufficient for the Atlanta Hawks to beat Portland.

The point guard finished with 36 points, 8 assists and 6 rebounds, well supported by Desmond Bane’s 29 points and 8 rebounds. In Brooklyn, Kevin Durant was the leading scorer with 26, while Harden scored 19.

Ja Morant and his amazing Memphis Grizzlies, who They have five wins in a row, they stormed the Brooklyn Nets court with authority and power, which added their third defeat in a row.

The Spanish Santi Aldama had a notable weight in the rotation of the Memphis with 17 minutes in which he achieved 2 points, 8 rebounds and a block.

Facu finished with 8 points, 5 rebounds and 5 assists in the 103-89 loss to the Mavericks, while Jokic had 27 points and 16 rebounds. Luka Doncic was the great figure of the match with 21 units, 15 assists and 8 boards.

The Dallas Mavericks defeated the Denver Nuggets without major problems in a game in which Nikola Jokic’s team (27 points and 16 rebounds) lost 26 balls.

Luka Doncic, who added his second win in a row after his comeback after missing ten games, got 21 points and 15 assists for Dallas while the Argentine Facundo Campazzo achieved 8 points, 5 rebounds and 5 assists for the Denver ones.

Saddiq Bey was the big standout of the game with 34 points and 8 rebounds, while Jackson scored 24 from the bench. In Milwaukee, Antetokounmpo had a great game with 31 points, 10 boards and 7 assists.

The Milwaukee Bucks were hurtling toward the top of the East after six wins in a row and suddenly found themselves with the most unexpected loss to the Detroit Pistons, the team with the second worst balance in the league.

Saddiq Bey shined for the Pistons with 34 points, 8 rebounds and 4 assists while Giannis Antetokounmpo could not avoid the defeat of the reigning NBA champions despite the fact that he touched the triple-double (31 points, 10 rebounds and 7 assists).

Jordan Poole was the star of the game with 32 points and 5 assists coming off the bench, while Wiggins scored 22. In Miami, Butler scored 22 but had to leave due to injury.

Jordan Poole (32 points, 12-of-17 shooting) replaced a misguided Stephen Curry (9 points, 3-of-17) to make the Golden State Warriors to drop Miami Heat in a high-flying duel.

The worst news for the Heat was not that they had their second loss in a row but that they Jimmy Butler, his leading scorer today with 22 points, had to leave the court with a right ankle injury. after slipping in an ugly gesture.

Mexican Juan Toscano-Anderson had 2 points, a rebound, an assist and a steal in 9 minutes for the Warriors.

It was an agonizing 102-98. In the Chicago team, Demar DeRozan stood out, with 29 points, 2 assists and 3 rebounds. Franz Wagner led the rival with 22 points.

With more trouble than anticipated, the Chicago Bulls beat the Orlando Magic at home for their eighth straight win to consolidate in front of the East, already opening a gap against the Brooklyn Nets.

DeMar DeRozan (29 points) and Zach LaVine (27 points) once again showed that they are in great form in the Bulls while Franz Wagner (22 points) and Wendell Carter Jr. (21 points) led the resistance of a Magic quite combative.

Faced with the loss of their figures, Anfernee Simons was the great highlight with 43 points and 7 assists, while Powell scored 26. In Atlanta, Trae Young had one of the best games of his career: 56 points and 14 assists!

Trae Young was a whirlwind for the Atlanta Hakws with 56 points (17 of 26 in shots with 7 of 12 in triples) but it was not enough for his team to take the victory on his visit to the Portland Trail Blazers court.

In front of Young he stood Anfernee Simons, who played the best game of her career by contributing 43 points for the Blazers.

Leandro played 4 minutes and took 1 rebound, while the figurehead was Anthony Edwards with 28 points in the 122-104 victory. In the Los Angeles team, Serge Ibaka was the best with 17 goals and 4 boards.

The nationalized Spanish intern Serge Ibaka played his best game so far this season (17 points without failure with 7 of 7 in shots, 4 rebounds, an assist and a block) but Los Angeles Clippers clearly fell to the Minnesota Timberwolves.

Anthony Edwards (28 points, 2 rebounds and 4 assists) was the main offensive resource of some Wolves who were already winning by more than 20 points in the third quarter and who took advantage of the 20 losses of the Los Angeles ball (18 of them in the first three quarters).

The Argentinian Leandro Bolmaro played 4 minutes with the Wolves in which he took a rebound.

The Salt Lake City team beat their rival 104-115 on the road. The shooting guard had 29 points, 5 assists and 3 rebounds. In the local, Jonas Valanciunas stood out, with 25 points, 2 assists and 9 rebounds.

Utah Jazz turned the game around in the second half to achieve a road win against the New Orleans Pelicans Driven by Donovan Mitchell (29 points, 3 rebounds and 5 assists).

Jonas Valanciunas (25 points, 9 rebounds and 2 assists) stood out in his return after the coronavirus for some Pelicans in which the Spanish Willy Hernangómez got 2 points, 3 rebounds and a steal in 5 minutes.

Joel Embiid signed the third triple-double of his career (31 points, 15 rebounds and 10 assists) in the comfortable victory of the Philadelphia 76ers over the Houston Rockets.

In the Rockets the most news occurred off the field: the Spanish Usman Garuba entered the coronavirus protocol while Kevin Porter Jr. and Christian Wood served a penalty game imposed by the team due to his misconduct in last Saturday’s game against the Nuggets.

Kyle Kuzma had his best game in the NBA with 36 points, 14 rebounds and 6 assists, while Beal had 35 points, 8 assists and 7 boards. In Charlotte, Hayward had a great game: 27 points, 8 rebounds and 4 assists.

Kyle Kuzma (34 points with 6 triples, 14 rebounds and 6 assists) and Bradley Beal (35 points, 7 rebounds and 8 assists) led the Washington Wizards, who defeated the Charlotte Hornets after a tight finish.

Gordon Hayward (27 points, 8 rebounds and 4 assists) was the leading scorer for the Hornets with four players over 18 points.

The Colombian Jaime Echenique had no minutes with the Wizards.