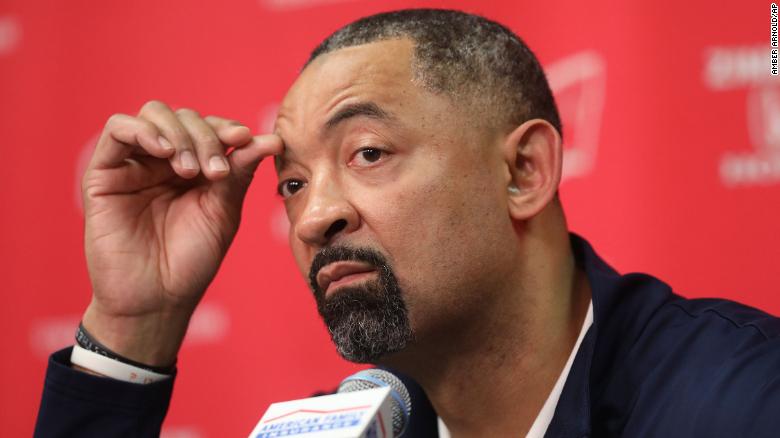 Two judges collapse during matches on the same day 1:17

(CNN) — University of Michigan men’s basketball head coach Juwan Howard threw a punch as he shook hands with opponents after his team’s game against Wisconsin on Sunday.

Following the Michigan Wolverines’ 77-63 loss to the Wisconsin Badgers, Howard and Wisconsin head coach Greg Gard shook hands and Howard could be seen saying something to Gard.

Juwan Howard speaks to the media about a fight that broke out on the court after an NCAA college basketball game against Wisconsin.

Gard grabbed Juwan Howard with his left hand to prevent the Michigan coach from moving on to the next person to shake hands, which seemed to anger Howard.

After arguing for a few moments, the two parted ways before another Wisconsin attendee started yelling at Howard.

Shortly afterward, Juwan Howard threw a punch at a member of the Badgers’ coaching staff, leading to jostling between both groups of players and staff.

Gard spoke with CBS Sports after the game on the court to explain his perspective on the altercation.

“So I took a timeout and he gave us a new 10 seconds and helped them get organized and get the ball in. He didn’t like that when he crossed the handshake line, so I’ll leave it at that and the tape will show the rest.”

Juwan Howard addressed the incident in the post-game press conference: “I didn’t like the timeout they called, I’ll be totally honest, I thought it wasn’t necessary at the time, especially with a big lead… I thought it wasn’t just right for our boys.

“Basically, I told the head coach that I would remember because of that time out. But for someone to touch me … I think it was very inappropriate for him to touch me while we were talking and communicating. So that’s what ended up happening, that It’s what intensified it.”

Wisconsin Badgers assistant coach Joe Krabbenhoft reacts after a fight broke out between Wisconsin and Michigan.

University of Michigan athletic director Warde Manuel issued a statement after the end of the game.

“I am aware and watched the end of our men’s basketball game,” Manuel said. “There is no excuse for any member of our staff or student-athlete to get into a physical altercation with others, regardless of instigating factors.

“I have reached out and apologized to Chris McIntosh and President (of Michigan, Mary Sue) Coleman has contacted University of Washington Chancellor Blank to apologize for the totally unacceptable behavior. We will review the situation further and work with the Big 10 Conference as they determine their disciplinary actions and whether further disciplinary action is warranted.”

The Big 10 Conference said it is “aware” of the incident and is “currently evaluating it.”

“The conference will provide further information and take prompt and appropriate disciplinary action when it completes its review,” it said in a statement.

CNN has reached out to the University of Wisconsin for a statement.