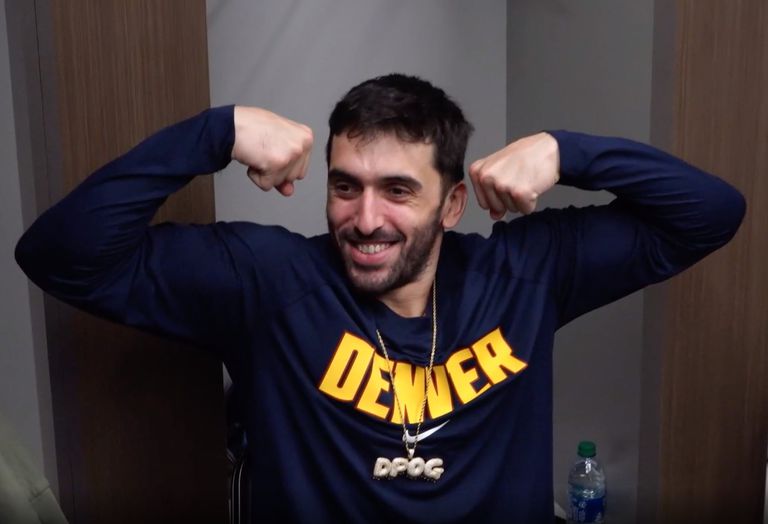 It is a fun ceremony that is becoming a custom for Facundo Campazzo. Thanks to his outstanding work in the victory that the Denver Nuggets completed as a visitor to the Atlanta Hawks for 133-115, coach Michael Malone honored him with the “Defensive Player of the Game” award (a pendant with the acronym DPOG), as had happened against the Spurs.

Once the distinction is received within the Nuggets dressing room, The man from Cordoba rehearsed a cartoonish sign of strength showing his muscles, while his teammates applauded and cheered him on. Much looser, smiling and histrionic compared to the previous time, before the franchise where Manu Ginobili shone, Campazzo gave ample signs that he is enjoying this present time with Denver. Shortly after, DT Malone asked to bump his fists between his basketball players so that the team maintains this clean and jerk with a view to what is to come in the NBA.

The point guard did a lucid job against the Atlanta Hawks on Friday night. The match took place at the State Farm Arena in the city of Atlanta, with a progression favorable to the Colorado quintet with the following figures: 29-26, 72-54, 106-87 and 133-115. Campazzo, 30, entered from the relay bench and was on the court for almost 20 minutes.

What does the form say? The former player of Peñarol de Mar del Plata and Real Madrid contributed 7 points (2-3 in doubles, 1-2 in triples), 8 assists, 3 rebounds and 3 recoveries. Among those led by DT Malone, the Serbian intern Nikola Jokic stood out, with a roster of 20 units (7-10 in doubles, 1-2 in triples, 3-3 in free), 10 rebounds, 7 goal passes and 3 steals . There was also a commendable production from point guard Monte Morris, with 21 points and 3 rebounds. In the Georgia state quintet, point guard Trae Young contributed a balance of 34 points, 10 assists and 3 rebounds.

The chain with the initials DPOG is awarded each time the team achieves a victory, just after the match and in the presence of the entire squad. On that other opportunity against Spurs (8 assists and 8 points, for the victory by 127 to 112), the national team received shyly – you can hardly hear a thank you for the low – and shook hands with the coach, knowing that It was a recognition of his good moment and for the commitment and passion to face each game, after a not very good start to the season.