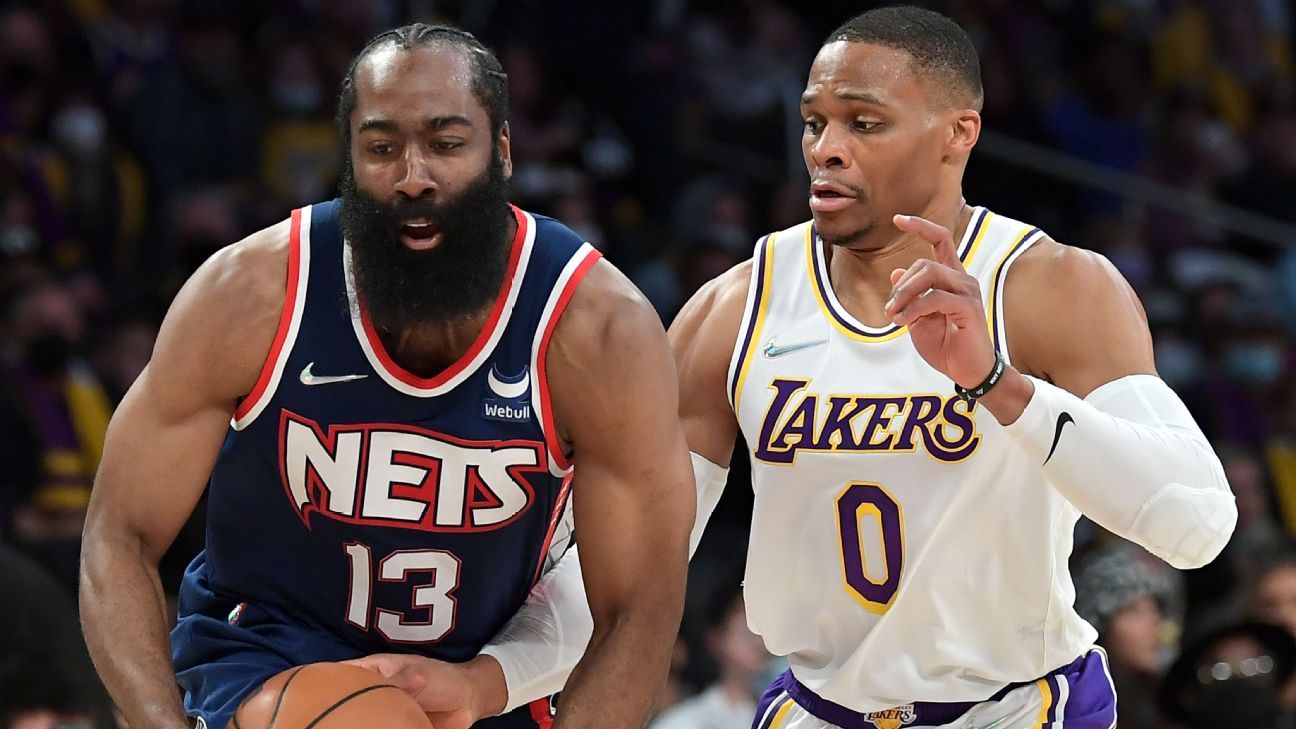 Stephen Curry fell a triple from becoming the first player to score 3,000 in NBA history, on a Christmas day in which James Harden got in the way of LeBron James and Giannis Antetokounmpo once again demonstrated his great potential as the leader of the defending champion in the league.

Brooklyn celebrated in Los Angeles a very good victory against LeBron’s team that does not lift. It went 122-115 with a tremendous triple-double from Harden: 36 points, 10 rebounds and 10 assists. King James scored 39.

James Harden posted a triple-double of 36 points, 10 rebounds and 10 assists to ruin a great performance by LeBron James, who saw the Los Angeles Lakers fall 122-115 to the Brooklyn Nets.

Harden, who took responsibility for guiding the Nets in the absence of Kevin Durant, who is under the NBA’s covid-19 protocol, had the backing of Patty Mills, who added 34 points.

James scored 39 points, 13 of them in the fourth quarter, with 9 rebounds and 7 assists to be the benchmark in the Los Angeles team’s attack, which fell once again in the absence of Anthony Davis, due to a sprained left knee.

The Warriors star finished the game with 33 points and 6 assists, while Otto Porter scored 19. In Phoenix, Chris Paul did everything, but it wasn’t enough: 21 points, 8 assists and 6 rebounds.

In a duel between the two best teams in the NBA Western Conference, Stephen Curry fell a triple from becoming the first player to score 3,000 from the three-point line and the Golden State Warriors beat the Phoenix Suns 116-107 .

Curry scored 5 of the 16 he tried from three points and finished his performance with 2,999 triples in his career, which contributed to him achieving 33 points to lead in this way the attack of the Warriors.

Those coached by Steve Kerr counted on 19 points from Otto Porter Jr. to win the game, placing their record at 27-6 and being the leaders of the West over the Suns (26-6).

The veteran base Chris Paul scored 21 points, distributed 8 assists and took 6 rebounds to be the spearhead in the attack of the Phoenix, who added 18 from Deandre Ayton, but who had a weak game from Devin Booker, who finished with 13 points.

The Greek returned in spectacular fashion and finished with a brilliant roster (36 points, 12 rebounds and 5 assists). In Boston, Tatum and Brown each had 25 points.

Antetokounmpo, who was in his first game after exiting the NBA health protocol, showed his customary dominance with 12 rebounds and 5 assists to guide the Bucks to their third win in a row.

Jayson Tatum and Jaylen Brown each had 25 points for the Celtics.

It cost the Jazz to defeat the Mavs at home – without Doncic – but they closed it 120 to 116. The scorer was Mitchell with 33, well accompanied by Bogdanovic with 25 and Conley with 22.

Donovan Mitchell scored 33 points and led the attack for the Utah Jazz, who successfully defended their home ownership status and defeated the Dallas Mavericks 120-116.

Mitchell, who added 3 rebounds and 3 assists to his performance, was backed by Bojan Bogdanovic, with 25 points, and Mike Conley, with 22 points, 7 rebounds and 5 assists.

Dallas, which continues without its star Luka Doncic, who is on covid-19 protocol, had 27 points and 9 rebounds from Kristaps Porzingis.

The Knicks dominated from start to finish at Madison and prevailed 101-87 with a triple-double by Kemba Walker (10 points, 10 rebounds and 12 assists). Randle was the scorer with 25 points (6-9 in triples), which he accompanied with 12 rebounds.

Julius Randle reached his sixth straight game of 20 or more points and guided the New York Knicks to a 101-87 victory over the Atlanta Hawks.

Randle scored 25 points, shooting 9-15 from the field, with 6 3-pointers on 9 attempts, plus 12 rebounds to end his day with a double-double.

Point guard Kemba Walker had his first triple-double since 2014, finishing with 10 points, 12 assists and 10 rebounds, to be a factor in the Knicks’ success.

John Collins and Delon Wright each scored 20 points to lead the Hawks, in the absence of their star Trae Young, who is in quarantine under NBA health protocol.

Curry, Harden, LeBron and Giannis all shone at NBA Christmas