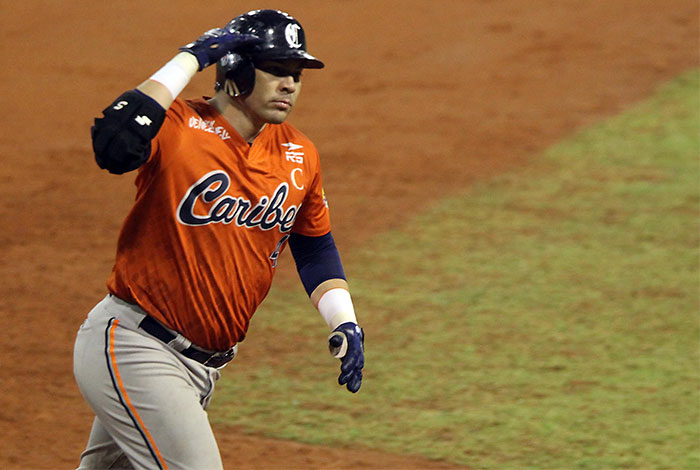 Caribes de Anzoátegui swept Leones del Caracas in their two-game visit to the Estadio Universitario, winning 8-6 and setting their record at 3-1 in the first quarter of the semi-final Round Robin of Venezuelan professional baseball. The result equals him at the top of the phase with Navegantes del Magallanes, who earlier this Thursday night, fell 4-2 in Barquisimeto against Cardenales de Lara that stripped him of his undefeated.

Anzoátegui dispatched 14 hits, in a day that was accompanied by a persistent rain, which at the beginning of the fourth inning forced the actions to stop for 44 minutes. In total, with the suspension time included, the challenge lasted 5 hours and 10 minutes, before a crowd of 1,161 fans.

The tribe, which the day before had won 10-4, this time had Víctor Reyes and Niuman Romero, its main offensive engines and who combined to drop five extra-base hits. Reyes, fifth batter and designated, was 4-4 with three runs, three doubles and a triple, plus one RBI. In this instance of the 2021-2022 championship he is hitting .625 points. For his part, Romero, third baseman and third batter, finished 5-2 with his first homers of the phase, two runs scored and another two RBIs. His home run in the eighth inning put a substantial three-run difference over Caracas, which was impossible to erase in its entirety. Balbino Fuenmayor also showed off by adding two RBIs, his first of this stage.

The victory belonged to Ángel Guillén (1-0), fifth of seven pitchers used by Mike Álvarez, a strategist for the Caribes. The save went to Andrés Sotillet, his second in this Round Robin. The game was started by Mayckol Guaipe, who had to leave the hill after the 44-minute suspension, just as he linked a chain of nine withdrawals.

The defeat fell to Ricardo Rodríguez (0-1), fourth of six arms that marched through the Caracas mound. All received punishment, except for Danny Rondón, who worked 1.2 scoreless innings.

The Puerto La Cruz boys started the Venezuelan professional baseball Round Robin badly when they lost on Monday in Valencia against Magallanes. But on Tuesday they triumphed in Maracay against Tigres de Aragua to finish off with the Wednesday and Thursday sweep in the capital against Caracas, which is now tied in the basement with a 1-3 record with Aragua. The indigenous people return to their fiefdom with a positive balance of 3-1 on the highway, when they have not yet played at their home in the Alfonso “Chico” Carrasquel park, which they will do from Monday.

When it came to defense, both clubs played under the shadow of a mistake.

With information from the press release of the Venezuelan Professional Baseball League.

Caribes equaled Magellan at the top of baseball’s Round Robin