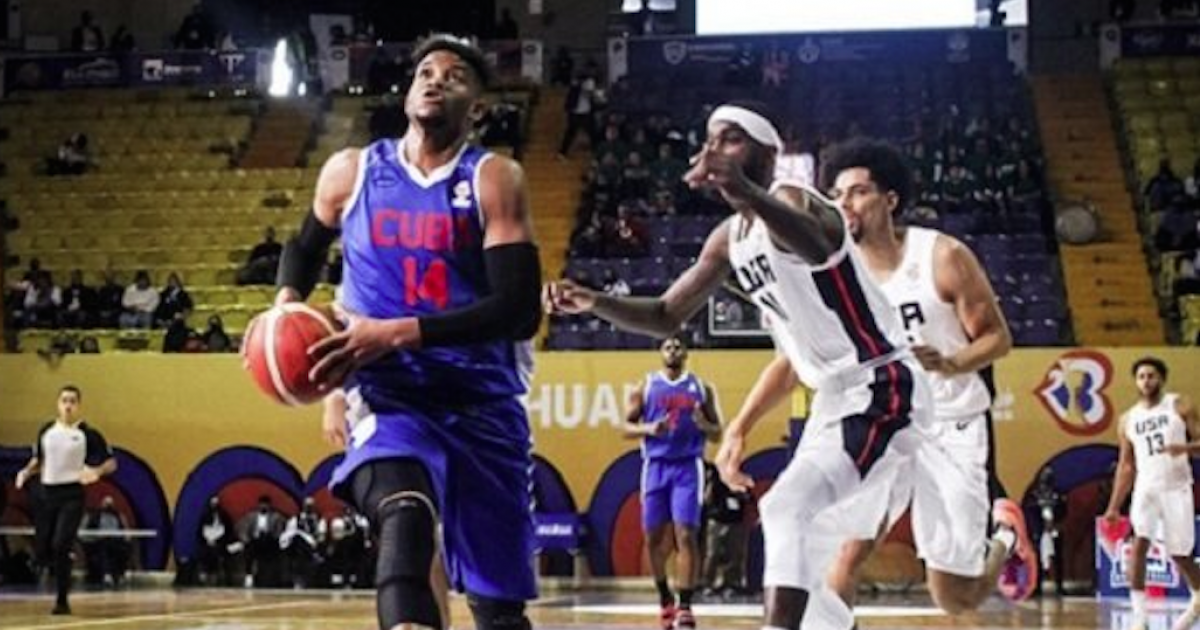 The Cuban basketball team they were defeated 90-95 by the United States this Sunday in the first window of the basketball qualifiers in America towards the 2023 Fiba World Cup.

Despite the defeat, the Cubans showed good teamwork and aggressiveness.

In the match, which took place at the Auditorium University Gymnasium of Chihuahua, Mexico, the Cubans came out to win from that first set guided by power forward Jasiel Rivero (Valencia Basket of Spain), who scored 17 points in the first 10 minutes and 34 in total, in addition to capturing nine rebounds.

And the scared and perplexed faces of Boylen and company lowered level in the second quarter when the departure of the Cuban regulars reduced the defense and the winners managed to tie at 41, barely played a minute and a half, especially thanks to three-point baskets that led them to go up 60-53 at the end of the half.

The Cubans, led by debutant Eduardo Moya, reorganized in the third quarter to level at 66 with four minutes remaining with Rivero’s dunk to reach 30 personnel. Yoanki Mensía (Gymnastics and Fencing of Argentina) with two triples and one from young Marcos Chacón returned the uncertainty in the rival ranks by setting the score 77-73.

On the North American side, Isaiah Thomas converted 21 points this Sunday with which he led the United States in their 95-90 victory over Cuba in the debut of both teams in the qualifying rounds of the Americas for the 2023 Basketball World Cup.

Thomas, a former figure of the NBA’s Boston Celtics, was the key for the Americans, while Cuban Jasiel Rivero scored 17 points to lead Cuba in a first quarter in which the quintet beat States 37-27 United.

The Cubans were quicker on the counterattacks, took advantage of the losses of their rivals and were right on the triples to beat the Americans.

The United States grew their dominance in the paint, counting on 20 points from their substitutes to turn the game around and reach the 60-53 lead at halftime.

The Americans were led by seven points from the bench by Zavier Simpson, in addition to another four from Isaiah Thomas.

Cuba refined its inside game in the third quarter, again counting on a good performance from Rivero, who dispatched seven units, to reach the final 10 minutes 77-73 with an advantage.

While the United States was erratic in shooting from the field and fell back into misfires in their possessions by losing the ball, which led them to be down on the scoreboard.

Thomas returned to his star role in the fourth quarter and with 11 points, six of them from abroad, he helped the United States finish the game 95-90.

The Cubans missed at the key moment in their field goals and also succumbed to the rapidity of the attacks by the Americans, who constantly caught them badly positioned in the transitions.

Later Mexico and Puerto Rico, who will experience the debut of their coach Nelson Colón, will meet in their first match in Group D of the World Cup qualifiers.

Cuba will return to action on Monday when it meets Puerto Rico, as will the United States, which will challenge host Mexico. Duels in sector D are played at the Manuel Bernardo Aguirre gym in Chihuahua.

Cuban basketball player Ysmael Romero will face the Cuba team for the first time this Monday wearing the shirt of the Puerto Rico national team.