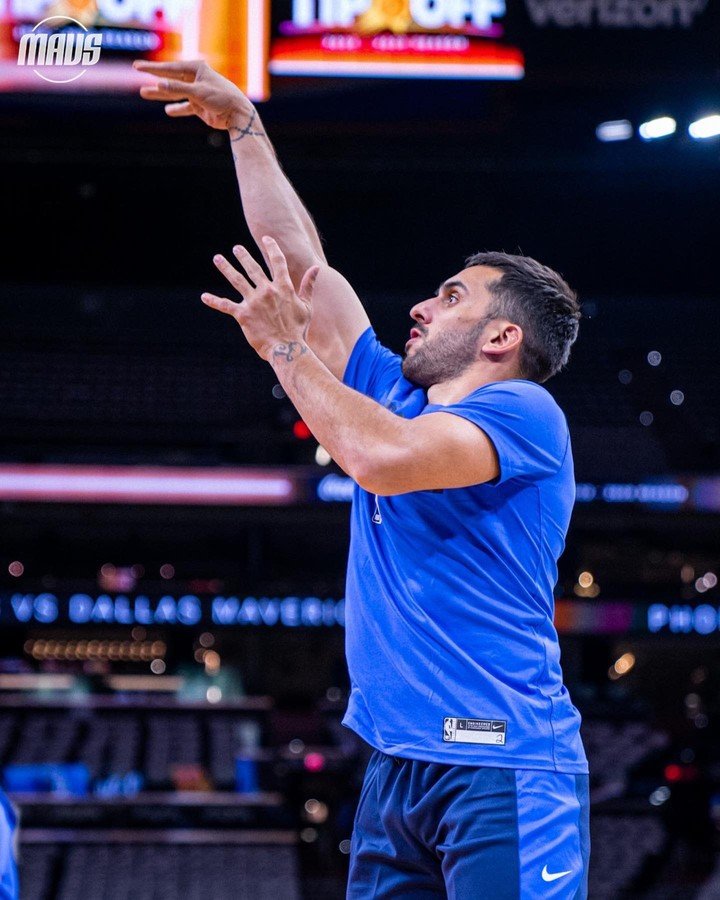 The novel about the future of Facundo Campazzo It took a long time to resolve. Despite having been one of the figures of Argentina in the title in the Americup, he had to wait until the last market to sign a contract with Dallas Mavericks. It is that the Cordovan, who had many interested in FIBA ​​basketball in Europe, had as a priority to continue in the NBA and being able to continue writing his dream in the best league in the world. “Facu told Claudio Villanueva and me that his priority 1 was the NBA, 2 the NBA, 3 the NBA and 4 just Europe“Commented David Carro, one of the base’s two agents.

Campazzo in the preview of the duel against the Suns. (Photo: @dallasmavs)

Although Carro confessed that there were talks with different teams, the signing of the contract with one of them took longer than necessary due to different factors such as the break due to trade of Kevin Durant and Kyrie Irving, for the high number of free players and for all the open paths that the teams that had set their eyes on Campazzo had.

In that sense, he commented that there were two franchises that insisted a lot on the captain of the National Team. “There was Golden State, that depended on whether Iguodala came back or not. If he didn’t come back, Facu could enter. He returned Iguodala and did not give. With the Lakers they came to talk 20 times, but in the end they decided on Schroder. And so many others that we were not counting because that is not our job,” said the Spaniard, part of the Octagon agency, in a chat with Basquet Plus.

In addition, he told how he arrived in Dallas: “The issue with them is that because of the salary cup and the luxury tax, where they are eighth among those who spend the most, it made the operation more complicated. But Jason Kidd had been asking the player for a month, general manager Nico Harrison was convinced that Facu was the player they needed for what they wanted, and Luka Doncic obviously, being the team’s superstar, knew what he could bring. There were other things that interested us, like the role that it will have, and that it is a playoff team that aspires to things. Not just any team.”

When will Campazzo debut in a Dallas jersey?

While the former Denver player continues to add minutes in practice with his new teammates, the big question Argentine basketball fans are asking is when Campazzo will debut in a Dallas jersey. And the answer has already arrived: it could be this Tuesday at 8:30 p.m. in the duel against the New Orleans Pelicans as a visitor. After receiving the work visa, the base was available to the coaching staff and now the decision of whether he adds minutes or not will pass to Kidd.

Although Facu signed his contract with Dallas for one year and $1,836,090, with the possibility of extending it for another year for the 2023-24 season, this is not guaranteed and the Texans will have the power to dispense with the services of the Cordovan before on January 10, 2023. Therefore, the former Denver Nuggets player must earn his place in a team whose base and star is the Slovenian Luka Doncic, Campazzo’s former teammate at Real Madrid.

Campazzo received the visa and is ready to debut in Dallas!