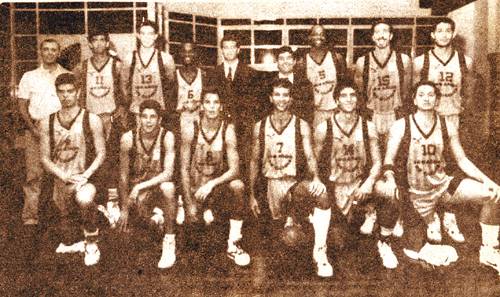 Today, Sunday, April 10, marks the 30th anniversary of the promotion of the Náuticos to the National Basketball League, a conquest that put the bow on the celebrations for the institution’s 100 years of life. They achieved it by beating Banco de Córdoba, with the technical direction of Guillermo Edgardo Vecchio and players who went down in history.

One Friday, April 10, 1992, Regatas left behind an arduous struggle in the promotion categories of Argentine basketball and reached the National League for the first time, becoming a historic event for all of San Nicolás and the region. The Náuticos achieved this by winning one of the final series of the 1991/92 National Promotion Tournament against Banco de Córdoba, over which they clearly prevailed 3-0. “The team that was prepared to win won, the team that best qualities he had shown throughout the League and won the team that as such has aroused the admiration of the national basketball world”, summarized one of the paragraphs of the EL NORTE chronicle after the remarkable conquest of the regatans, who in the early hours of The next day they were received by a veritable crowd, which gathered to celebrate at the intersection of Miter and Sarmiento streets -in front of Plaza Miter-.

It was in Cordoba; in the third game. Regatas won by 103 to 94 and became “A”, under the technical direction of Guillermo Edgardo Vecchio. In that match, the winner had the outstanding contribution of American Teddy Colter, who finished with 30 points, 5 rebounds and 3 assists. In the midst of a remarkable collective performance, they also showed off the work of their compatriot James Parker (19 points) and the greatest hero of the fans for those happy and indelible days: Teodoro Michalópulos. Yes, the same as “Micha, Micha; egg, egg, egg”; the kid from the club who reached the top with the colors of his love. “This is an unforgettable night, for this reception, for these people. Everything we earn is for them, who are now celebrating with us. I was expecting a good turnout, but this exceeded all calculations”, said an emotional Michalópulos upon arrival at the Nicoleño center after the triumphant trip from Cordoba.

That time, a Cordoban from Río Tercero who years later would come to our city to play in Belgrano and who would become an idol of the Reds was the scorer for Banco de Córdoba and the game: Carlos Colla. On that night that was all Regattas, Caco scored 36 points.

The match took place before a quite hostile local public, which even generated certain doubts in the referees regarding the start of the second half, which is why it was delayed for several minutes. In any case, Regatas was permanently up on the scoreboard, having Colter as the best figure on the field. This allowed him to achieve a victory that motivated the final joy and the celebration until the wee hours of the morning of a large number of Nicoleños who traveled to witness that show.
In the previous clashes with Banco, Regatas in the old and mythical La Ribera stadium (highly respected and feared by the opponents, by the way) had won in the rematch 102 to 95 (with 24 from Gallardo and 35 from Colla for the visit), while at the start of the crossover he had done so by 122 to 114 (with 42 from Ricardo Lorio and 41 from Colla, scorers from both sides).

Regatas had reached the final having won 26 of its 33 matches, while Banco had played 32, with 23 wins. After being promoted, Regatas lost the championship final with Santa Paula de Gálvez.

The squad that rose to the highest category, in addition to the aforementioned Michalópulos, Colter, Parker and Lorio, was made up of, among others, Waldemar Cardona, Alejandro Gallardo, Ferrari, Cabral and Martínez. Vecchio, his DT, although he stayed another year at the riverside club, after this important achievement he jumped to the Argentine Senior National Team, directing the Albiceleste in the World Cup in Canada in 1994. He was Vecchio’s assistant during his time at Regattas George Acosta.

In that 1992, Regatas celebrated its 100 years of life in the best way. That promotion would be his first step in his journey among the greatest. In the midst of brilliant campaigns, it remained for twelve seasons in the “A”, qualifying in its first six consecutive years to play the “A-1” among the best and becoming one of the fifteen clubs with the highest number of championships played. in the elite with twelve, when it is already 18 years since his decline, which occurred in 2004.

BASKETBALL: 30 YEARS AFTER THE RISE OF RACES TO THE NATIONAL LEAGUE