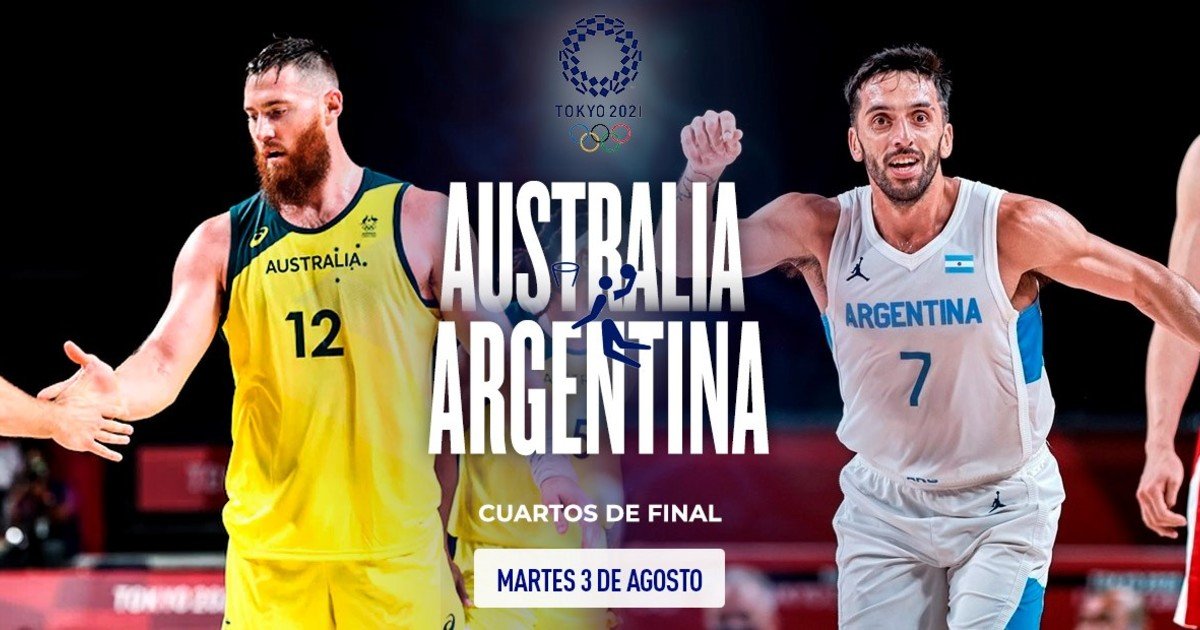 The Argentina basketball team wants to get into the top four of the Tokyo 2020 Olympics and for this, it is measured against the Australian team for the quarterfinals. Schedule what time they play, how both teams and TV arrive.

WHAT TIME DOES ARGENTINA – AUSTRALIA PLAY?

The match between Argentina and Australia will be played this Tuesday Y It will start from 09.00.

WHERE TO SEE LIVE ARGENTINA – AUSTRALIA?

The match for the quarterfinals can be seen on the screen of TyC Sports and Public TV. And as usual, you can follow the minute by minute by Olé.

HOW DOES ARGENTINA GET?

Those led by Sergio Hernandez they classified to the quarterfinals as one of the best third. On the first date, they lost to Slovenia by 118 to 100, and on the second day they fell before Spain by 81 to 71. Both teams, candidates to win a Tokyo medal. Already by the last date and with the obligation to win yes or yes to qualify, they defeated Japan 97-77 and sealed their place in the quarterfinals.

Before the locals the best version of Facundo Campazzo, who did not have a good game the first two dates. With 17 points, 7 rebounds and 11 assists, he was one of the figures and equaled the best historical record of assists for an Argentine in an Olympic Game. Another of those who had a great performance was the great Luis Scola: At 41 he signed a roster of 23 points and 10 rebounds.

HOW DOES AUSTRALIA GET?

Australian finished the group stage with an ideal score: The first game they beat Nigeria 84-67, on the second date they dispatched Italy 86-83 and for the last day of Group B, they beat Germany 89-76. The advantage that the oceanic have over most rivals is that they have several representatives of the most famous league in the world.

Its most outstanding player is the point guard Patty mills, of the San antonio spurs, known in Argentina for being a former partner and friend of Ginobili. The 32-year-old tripler (21.7 points, 5.7 assists and 37.5% of triples in 10.7 attempts) It is a history of your selection. He was scorer at the London 2012 Games and second at Rio 2016. In addition, He was flagged with swimmer Cate Campbell in this edition.

His other two figures are the forward is Joe Ingles, from Utah Jazz, specialist in three-point shots and with statistics of 10.3 points, 3.7 assists and 40% of triples in 6.7 attempts; and power forward Nick Kay of Shimane Magic, Japan, with a credit from the paint of 14.3 points and 6.3 rebounds. In turn, Matisse Thybulle (Philadelphia 76ers), is a defensive specialist and He leads the tournament with 3.3 steals per game.

The last time Argentina faced Australia was very recently, on July 11 in a friendly before the Games, where a triple by Patty Mills on the cicada gave the victory to the oceanic 87-84 In Las Vegas.

There is only one precedent in the Olympic Games: it occurred in the group stage of Beijing 2008, with Argentine victory 85-68 at Wukesong Indoor Stadium. Manu Ginobili broke it, with 21 points and 7 assists, accompanied by 8 rebounds that the Chapu Nocioni and great moments of Luis Scola (17 points). Luifa is the only one who will repeat action. That meeting 13 years ago had a certain Kobe bryant.

Another positive memory for the National Team against the oceanic was in the 2008 FIBA ​​Diamond Ball final, with a 95-91 victory in Nanking, China. They are only statistical data that will not play on Tuesday in Tokyo, but that helps to take a little clean and jerk thinking about continuing to dream of something else.