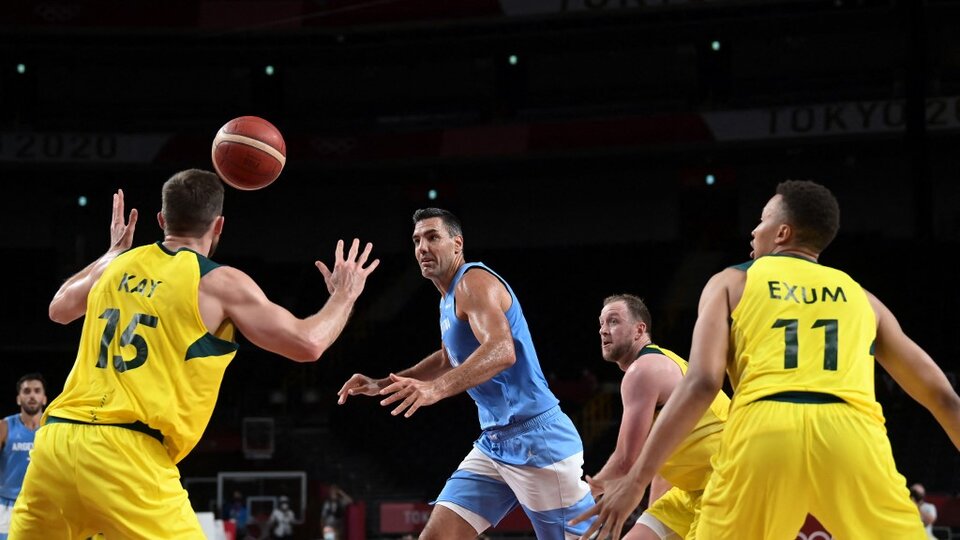 The almost two years that passed between the China World Cup and the Tokyo Games were an eternity for the Argentina basketball team, who said goodbye to the Olympics on Tuesday with a record loss to Australia 59-97 in the quarterfinals.

The fall also meant a Goodbye earlier than expected for Luis Scola (7 points, 2/7 in doubles and 1/3 in triples). In his fifth Olympic Games, the “Great Captain” left with little to go and won the applause of everyone present at the Saitama Super Arena, which forced the actions to stop for almost a minute. Luifa couldn’t help crying at such a context.

“It caught me off guard, I wasn’t expecting it. I thought I was going to finish the game playing … One out there hopes that your teammates, the coaches recognize you and in a moment I raised my head and saw the rivals, the journalists, the few people that were on the field and it hit me a bit. I appreciate it from the heart “, declared to the Public Television the last banner of the Golden Generation that defied history in Athens 2004 and broke with American hegemony.

“We did not imagine an ending like this, we did not imagine a match like this. We imagined a match more similar to the first half where they dominated, because they are in a better moment than us, and that we had to row and due to a question of character to reach the end with a chance. But hey, the physical wear and tear, Garino’s injury, Deck’s issue that could never recover from the covid issue. It made us lose game, lucidity and If we have to do an analysis of the tournament, we could never have game volume, we can’t find the rotation. And here are the best in the world and we were not up to the task for various reasons, “reflected coach Sergio Hérnandez.

The pandemic postponement did not do any justice to the team “Oveja”, which showed a completely alternative version of the one that earned him the runner-up in 2019. If in China the National Team provided a show to remember and excite, with a remarkable collective style of play, very high individual levels and a high-end defense, in Tokyo everything turned out the other way around. And Australia collected it with punitive interest, giving it the most bulky defeat in its Olympic history (the previous one had been with the USA in Atlanta 1996 by 68-96) and with a goal that was not so low since Helsinki 1952 (59 -68 with Uruguay).

He had started as if to get excited about the story of this Tuesday, with the novelty of an Argentina making its rival perspire from defense, something that had not happened so far. Australia played to make the ball run, with long possessions in search of the best placed pitcher, but it was very difficult for them to violate the great deployment of the National Team at the start. Proof of this was that Patty Mills (18 points), the Boomers’ scoring card, just took her first shot at 4 minutes.

Conversely, the albiceleste attack was fast, with Campazzo (9 points, 3/5 in doubles, 1/5 in triples, 5 assists and 6 losses) breaking and unloading so that his teammates take the shot almost without thinking or, in any case, defining himself. The Cordovan had to detach himself from the rough initial mark of Matthew Dellavedova, who made him staff the entire court to make it difficult for him to receive the ball.

Without the giant Aaron Baynes -injured-, Australia put all their chips in the long distance shot, something that with the passing of the minutes was finding. But it was only with the entry of defensive specialist Matisse Thybulle (12 points, 5 rebounds and 3 blocks) that he got into the game. With the Philadelphia 76ers on the court, Argentina found it much more difficult to score: from the first quarter with a 22-18 advantage, the progression was 11-21 in the second, 15-21 in the third and 11-37 in the last.

The triple, the doom

What followed the first set was complete desperation by the national team, reflected in individual outbursts seeking to break the drought in attack. No idea of ​​team play (13 assists and 17 losses), reliance on the 3-point shot was the downfall, but not because it was the lowest-percentage shot in basketball per se, but because they were not the product of a previous elaboration, but hasty and uncomfortable. Argentina came as the team with the worst percentage in triples to the game and left in the same location. He shot 8/30 for a 27% accuracy (against a fatal 17/38 and 45% of the Australians), while in the tournament he averaged 31.8 attempts (4th in the category) for a 29.1% efficiency.

But despite how bad the team was, the difference of 12 to enter the last quarter kept hope. Of course, Australia was in charge of shutting it down without the slightest mercy. It took more than 5 minutes for Argentina to find its first points of the quarter. By then, the story was 79-48 with a 19-0 run from the oceans and the only wish left was for everything to end as quickly as possible. The “Boomers” will be measured in semis with United States, while the other crossing will be encouraged by France and Slovenia.